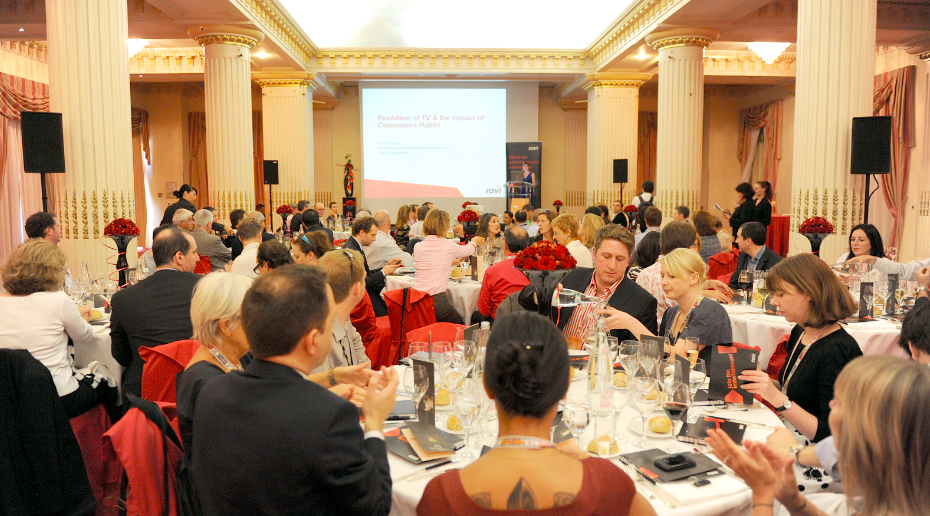 It’s one of those fabled fancy moments where you get to slip into a Top Secret Members-Only lunch at the Martinez as a fly in the wall. Champagne is poured, followed by a more than equitable entrée and meal of tender lamb.

Meanwhilst, there’s the talk, deemed of concern to the most sought-after MIPCOM attendees.

VP-business development Sean Besser of Rovi, which quietly offers white-label menu services to cable service providers, gave a brief, data-rich manifesto prior to starters (a heavenly legume that I can’t identify but that lent the satiety of tenderloin steak).

83% of people have no idea what to watch when they turn the TV on, he began, quoting a study of British and German users.

“They want to be sold on what to watch.”

He buttressed that data by saying that of all the users that own an series-recording system, only around 30% actually watches what they’ve recorded.

TV guides must evolve to address this enormous hole. An option he suggested was a universal search system that trawls applications, the ‘net, and other services – the wares of Netflix and Blockbuster alongside such stations as Starz – to increase the likelihood of satisfaction for a user who, say, wants to watch Avatar at 3:30 in the morning.

Thereafter, clear options for availing the desired entertainment – including paid options – should be presented. This should be seen as more opportunity than setback; after all, earlier today CEO Michael Comish of Blinkbox told us that people spend more time with content, and are more inclined to pay for services, on TV versus on a computer.

Naturally, Rovi also stressed the importance of personalising the guide based on user preferences – a philosophy not lost on such firms as TiVo, which has been doing that since its inception (with mixed results).

John Jelley, head of digital strategy and development at BSkyB’s Sky News, buttressed this point by reminding me that BSkyB’s primary stream of income continues to come from subscriptions, so its focus is more on bringing premium content to particular media versus banking all its dosh on the ‘net and pinning the justification to ad revenue. Today Sky gets a reasonable amount of traffic from the Xbox, for example, and it’s working on a mobile application aimed to extend users’ expectations of Sky to the iPad.

I asked whether development of the app is affected by formats like Flipboard, the new Twitter or other news apps, which primarily aggregate data and present them in print magazine form on the iPad interface.

“Not much,” he said. “Formats like that are organised around written content, and Sky has a lot of video content.” He said they built around that idea: that what they’d providing would be mostly audiovisual, like television.

Asked whether the application would cost a fee, he said Sky is interested in sponsorship: a brand whose presence remains the entire time you’re engaged with the app, for example.

And posting on YouTube versus internal video platform development?

He said sometimes they post things on YouTube occasionally, but it’s not Sky’s biggest priority; it prefers to keep things in-house. “So we’ll work with what Apple lets us work with,” he said mildly. “We’re using HTML5.”

Rovi retired to friendly applause, and we set ourselves to the business of lamb, wine, macarons and coffee. Conversation relaxed itself then; one of the great pleasures of eating with your peers is being able to talk about the things that secretly bother you (in the industry), as well as things you quite like (in this case, being in Europe or elsewhere in Europe besides home base). At my table, there seemed to be a great deal of favourable talk about the nomadic tendencies of Australians.

“Some say that Australians are born with a backpack on. But it’s the New Zealanders,” a pair of Australian girls exclaimed, their giggles at my table all bubble and mirth, “they all come and we all leave!”

Can you spot Angela in this photo? If so, comment! 😉