Diversity was at the heart of the debate at MIPCOM 2017. Read what Sir Lenny Henry, Catherine Zeta-Jones and more had to say about it in this wrap!
By Julian Newby on November 2, 2017 0 Comments
7
7
Shares

This is the latest in a series of posts by the MIPCOM News team, summarising the highlights of an action-packed week in Cannes. More soon!

If there was a single defining moment in MIPCOM 2017’s spotlight on diversity, it came during Sir Lenny Henry’s Diversify TV Keynote.

The actor, comedian and charity fund-raiser asked every able-bodied white man in the audience to stand. They were the clear majority. He then told each man standing to move next to anyone who was still seated, take a selfie and post it on social media. The point was made.

Henry was in Cannes to promote a campaign for tax breaks to encourage firms to use more people from ethnic minorities behind, and in front of the camera. When he first worked at the BBC he recalled: “I was the only black person in a 10-mile radius —there was me and the security guards and the women in the canteen. For 35 years I never had a meeting with an executive who looked like me.”

He said that, although campaigners had the moral argument on their side, change was not happening fast enough. Money would talk, he said, and he asked delegates to imagine how different things might be if their companies had to pass a diversity and inclusion test to qualify for preferential tax rates. 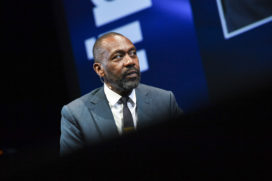 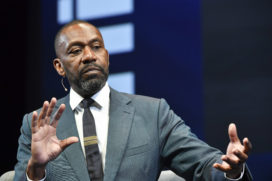 The Diversify TV initiative aims to champion diversity, equality and inclusivity on the small screen and improve the representation of racial and ethnic minorities, LGBTQ people and people with disabilities.

For the present, though, huge barriers remain, according to Bunmi Akintonwa, head of media consultancy, Little Black Book Company. She organised a Diversify TV networking lunch at the Palais and urged participants to do all they could “to mingle, do business and celebrate the wonderful creativity that diversity will bring to the industry.” Mo Abdu, chairman and CEO of EbonyLifeTV, Nigeria’s largest lifestyle network, said it was time to put right what had been wrong in the industry for so long. “I don’t know how people can go to bed at night knowing they have discriminated against someone based on their skin colour or gender,” she said. But signs of a shift in attitude were detected by representatives from many corners of the industry. David Levine, vice-president programming, production and strategic development at Disney Channels, EMEA saw it as a generational thing. “This [kids’] generation has more of a social conscience,” he said. “What we call ‘diversity’ comes naturally to them.”

That message, and the financial penalties of ignoring it, was re-enforced time and time again in a telling session entitled Breaking Stereotypes To Connect Global Audiences. Rioch Edwards-Brown, founder and CEO of So You Wanna Be In TV?, said that, by 2020, 40% of all economic spend will be by Gen Z.

He warned that those who do nothing now to attract this global audience with content that crosses borders, barriers, creeds, colours, cultures and genders run the risk of “doing a Kodak” by failing to embrace the march of progress.

Sugar Films’ Pat Younge said the issue was moral and financial. There was a reason why the entertainment industry was called “showbiz” and not “show friends”.

“This is a business and if you’re not talking to the world’s young people, you’re not doing good business,” he added. “So diversity is not just a moral imperative, though that’s extremely strong, it’s also about relevance and, ultimately, survival.”

Viacom International Media Networks (VIMN) Africa’s Alex Okosi highlighted the impact of growing ethnic and indigenous audiences. He observed that, when VIMN entered Africa 12 years ago, it screened mostly US content: “Twelve years later, Africans want African content that’s about their neighbourhood and in their language and relevant to their lives. The challenge is to find cheap and easy ways to research what your audience wants, so you make content that’s authentic and really matters to them. Again, that’s a business decision as well as a feelgood decision.”

First Nation actor Brittany LeBorgne also saw a change in the way storylines about indigenous people were being realised. The star of the multi-award nominated Canadian comedy-drama series Mohawk Girls said: “The indigenous character isn’t just a secondary role or a plot twist in the story any more. We are the story.” Success had not come overnight for indigenous filmmakers, declared Robert Connolly of Arenamedia, who co-created the Australian comedy-drama The Warriors, about indigenous members of an Australian Rules football team.

“We’re starting to see the results of several decades of investment behind the camera,” he said. “And not just in serious documentary. We’re at a great moment,” he added. “Here, at MIPCOM, buyers want to see diversity. UK/ US voices are not as dominant as they once were.”

With the Harvey Weinstein scandal attracting headlines before and during the market, the role of women in the television industry was under an intense spotlight.

The actor, Catherine Zeta-Jones, speaking during the Women In Global Entertainment Power Lunch, said she hoped the “big old dinosaur” of men thinking they could get away with such behaviour was now extinct.

On the wider issues of gender imbalance in the industry Zeta-Jones was clear that change was long overdue. “This has been a white man’s game since its inception,” she said. “The fact that we actually go ‘Wow!’ Wonder Woman made all that money and was directed by a woman — it’s flat-out bizarre.”

The star also made a plea to women to support each other in the industry. “Women don’t usually applaud other women when they succeed. It’s been such a scarce commodity for so long, that the woman who is the chairman of the boardroom doesn’t necessarily want another woman at her right hand. It’s like ‘I’ve got it, it’s mine’. And that is something that women can change. We should applaud, support and protect women in powerful positions. Not get jealous, not try to knock them off their pedestal, not call them a ‘bitch’ because they’re rich and successful.”