This month's best activations bring a new dimension to your favourite series, inviting you to be so much more than a mere spectator
By Matthias Puschmann on May 23, 2016 0 Comments

One of Snapchat’s most popular features at the moment is face swap, a lens that exchanges a user‘s face with someone else‘s in a photo or video. Based on this fascinating and sometimes disturbing phenomenon, Netflix has teamed up with creative agency Darewin to launch ‘#NetflixSwap‘, an outdoor print campaign in France that allows fans to do face swaps with heroes from Netflix original series. 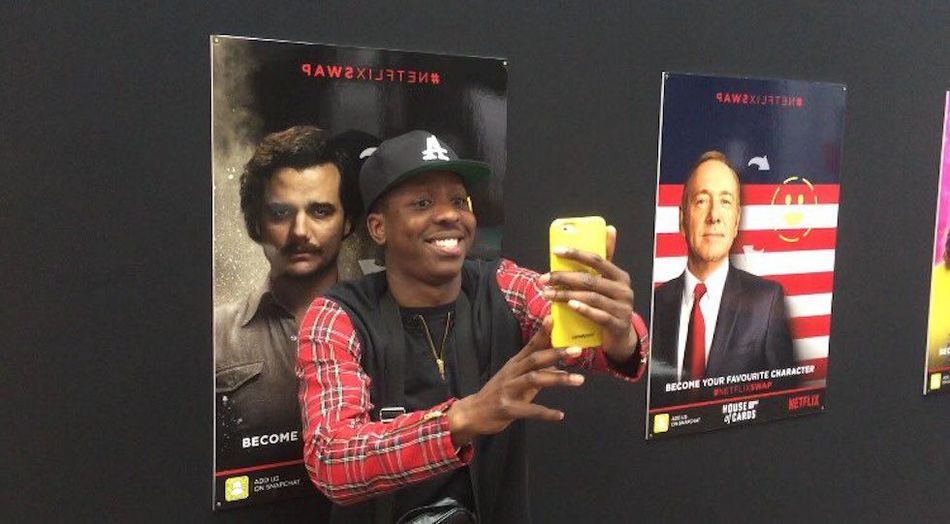 In mid-April 2016, billboards featuring characters such as Frank Underwood, Pablo Escobar, Daredevil or Piper Chapman were set up across the country. The recognizable yellow smiley face swap icon was placed next to the stars. 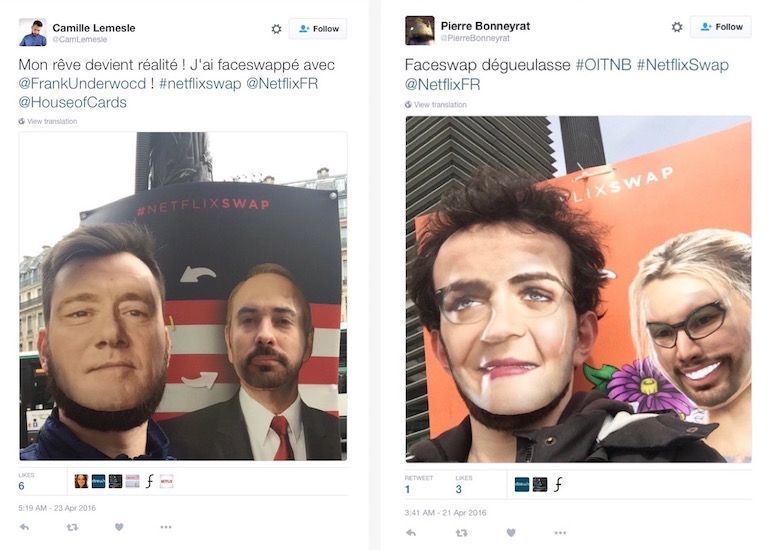 Furthermore, the billboards featured the QR code of the official Netflix Snapchat account, making it easy for Snapchat users to find and follow the streaming service. Fans then took to social media to share their fun creations using #NetflixSwap.

GAME OF THRONES: WITH WHOM DO YOU LISTEN ON SPOTIFY (HBO, USA) 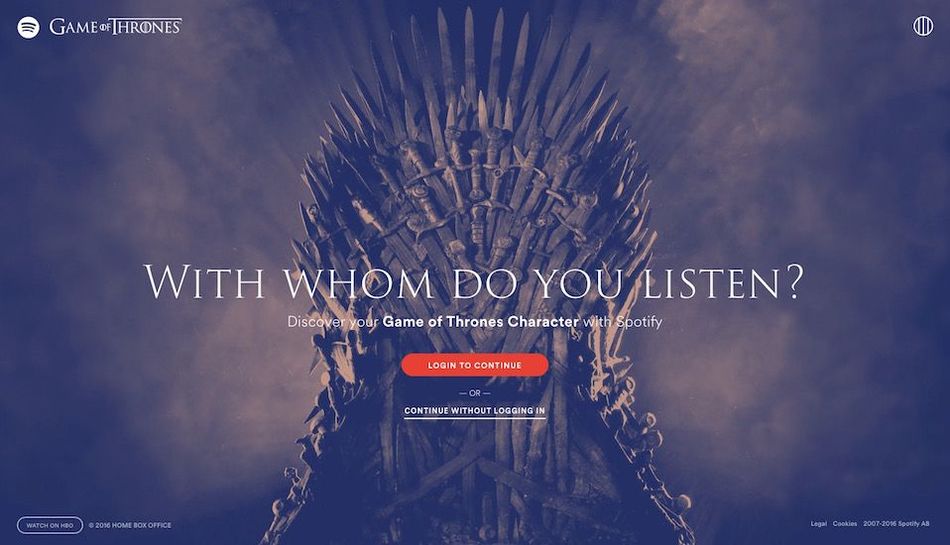 Leading up to the highly anticipated sixth season premiere of “Game of Thrones” on 24 April 2016, HBO teamed up with Spotify to set up a micro-site, which allows fans to match their music tastes to some of the characters in the series. 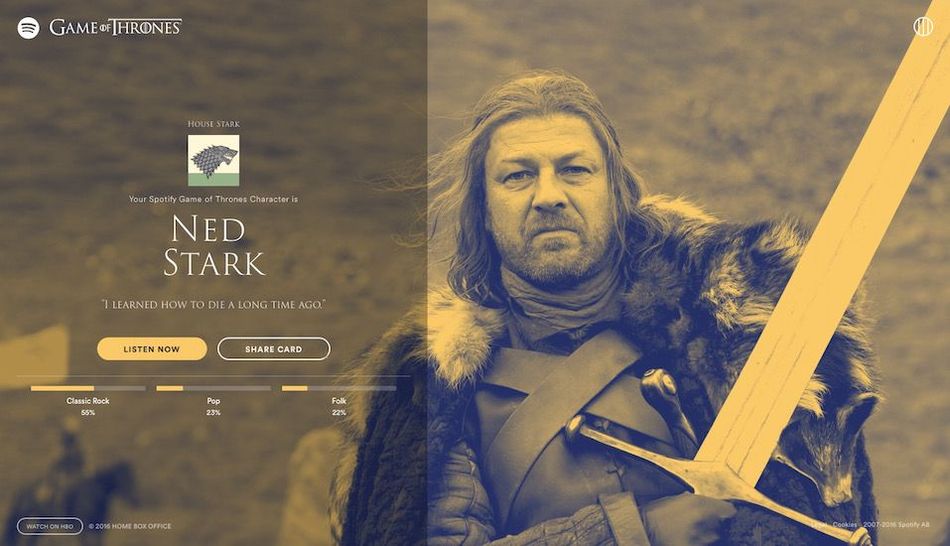 To find their match, users can log in with an existing Spotify account, whereupon the site processes the users’ listening habits and reveals a character best matched to that taste in music. 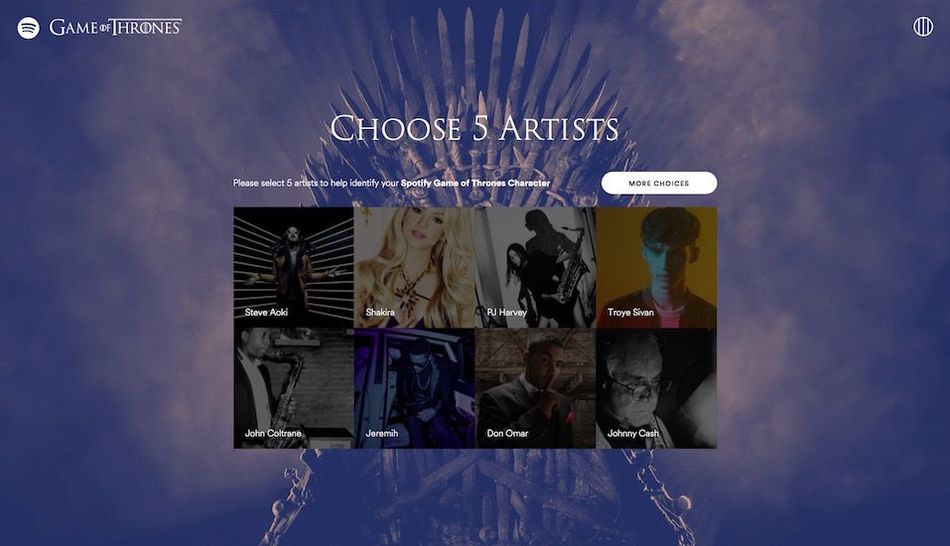 Alternatively, users can continue without logging in and choose five artists from a list. Based on the choices, a corresponding “Game of Thrones” character is then assigned. 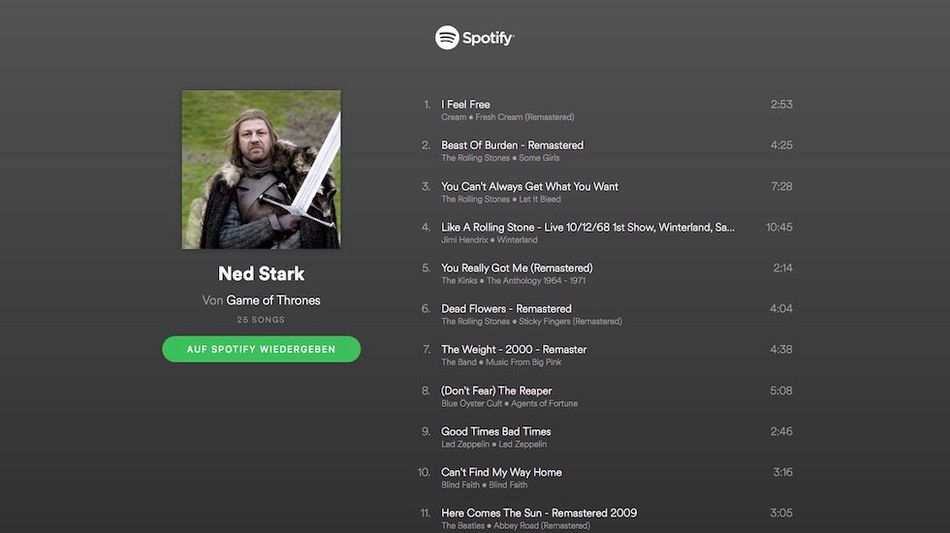 After the match has been identified, users can listen to the character’s playlist and share their result on social media. There is a total of 31 playlists from 31 characters.
BILD(ER) 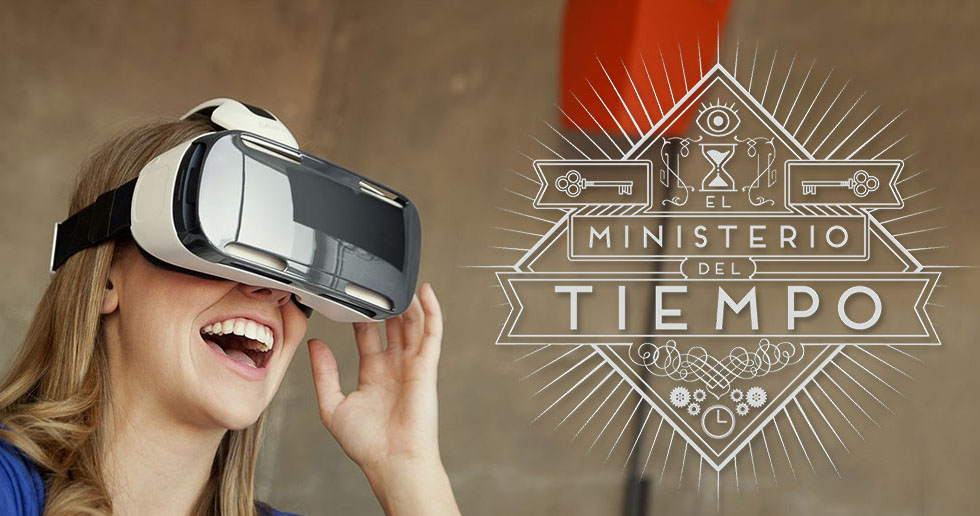 “El Ministerio del Tiempo” (Ministry of Time) is a science fiction series about a ministry that patrols the doors of time to prevent people changing events in Spanish history. Broadcast by RTVE, it is one the most successful fictional series on an international scale. Since the first season launched in 2015, the public broadcaster has added a number of transmedia elements to the series. On 4 April 2016, during the second season, RTVE released “El Tiempo en tus Manos” (Time in your hands), a special Virtual Reality episode that allows viewers to immerse themselves in the series and undergo an entrance examination to become an agent of the ministry themselves. 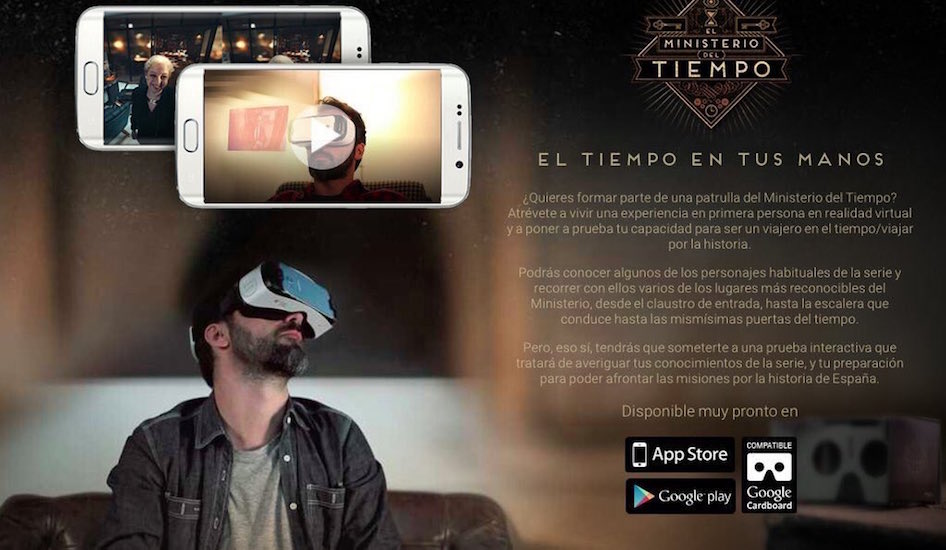 To view the 10-minute episode, users needed to download the dedicated ‘Ministerio VR’ app from the Apple Store or Google Play Store. The episode was co-developed by Future Lighthouse and Onza Entertainment. 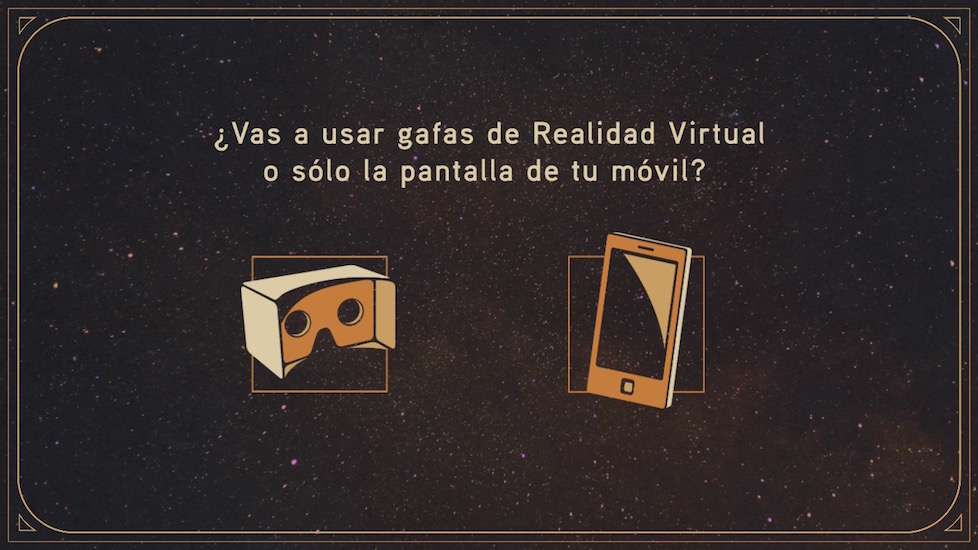 After downloading the app and an additional file within the app, users needed to decide whether they wanted to use a VR-viewer such as a Google Cardboard or their mobile phones. They were also able to choose whether to watch the espiode in Spanish or English. 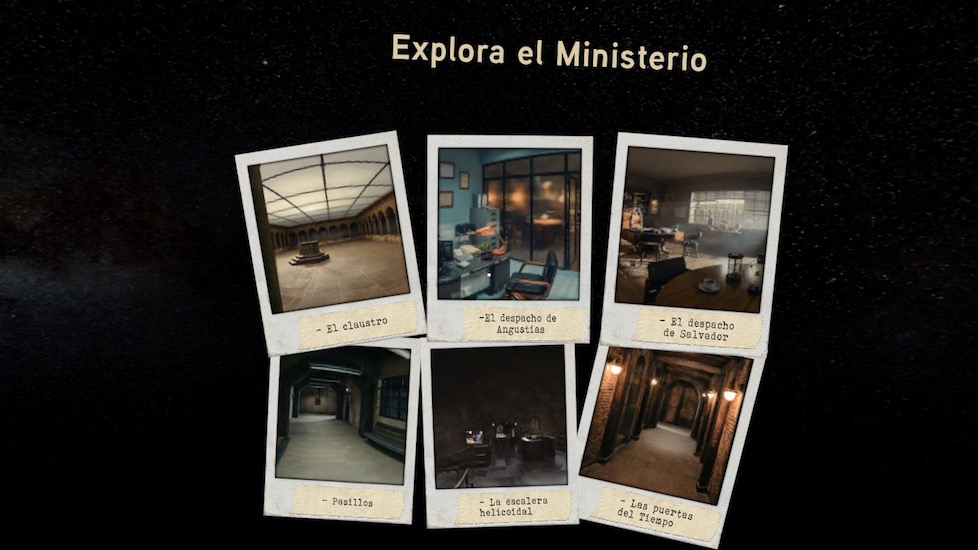 Before the actual VR episode starts, fans can explore the different areas of the ministry by themselves. 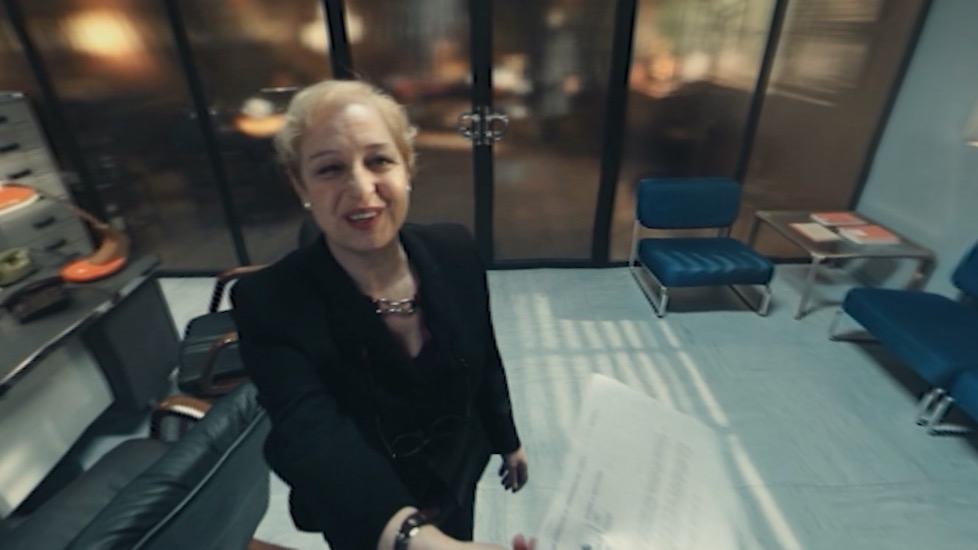 Then, after hitting the play button, viewers find themselves entering the headquarters of the ministry and being welcomed by Ernesto, one of the series’ characters. Throughout the episode, various characters from the series appear and interact directly with the viewer. Users are told that they need to undergo an entrance examination in order to work for the ministry. They then have to make their way through the ministry, collecting and handing over documents to and from the various characters and taking part in actual interactive tests. 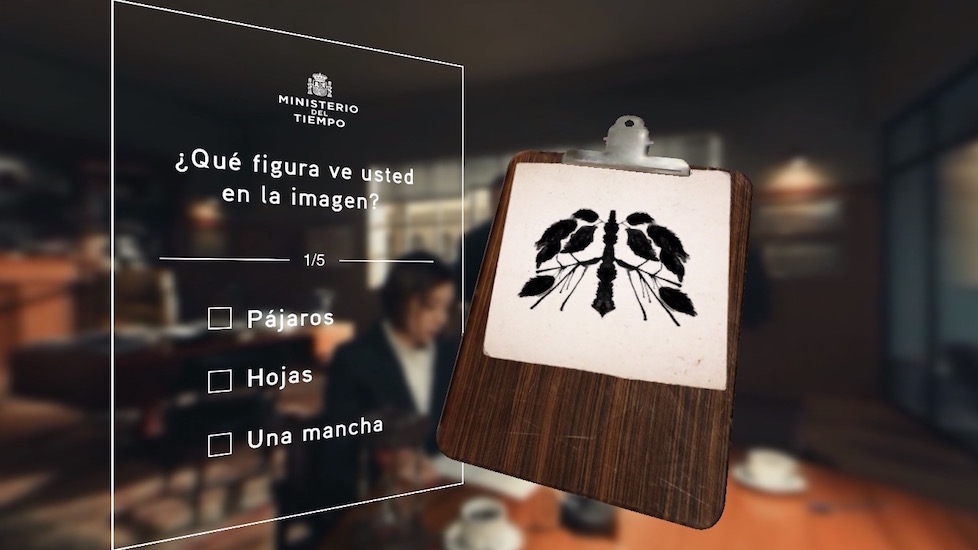 One of the tests challenges viewers to identify what kind of animals, plants or other objects are portayed in abstract paintings. 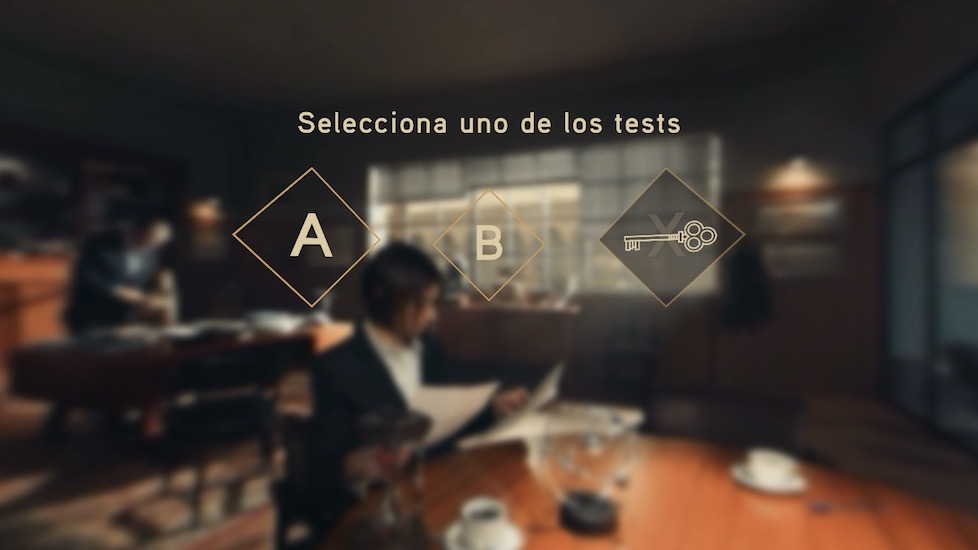 Each time a viewer watches the episode, they may choose to undergo different tests and challenges. Therefore, the experience is never the exactly same. 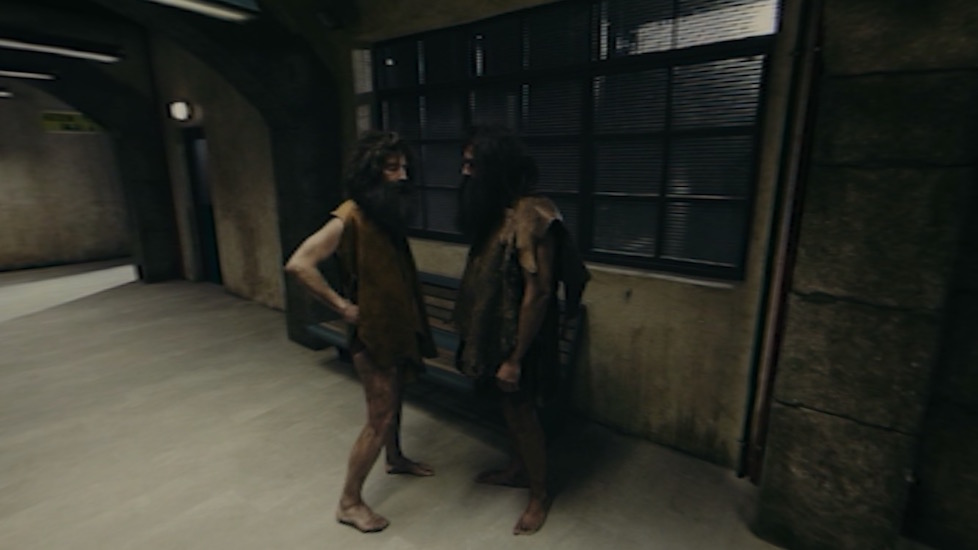 Listening to secret conversations, observing and interacting with characters and exploring different corners of the series’ settings is all part of the experience that the virtual reality episode offers. A behind-the-scenes video providing insight into the production process of the episode can also be found on the series’ official website.