Liveblog: TV disrupters go ‘into the stream’ at MIPCOM

PwC stats, and views from Roku, Spotify, Victorious and more
By Stuart Dredge on October 5, 2015 0 Comments

Expect plenty of talk about the world of over-the-top (OTT) video streaming at MIPCOM this year, with a barrage of platforms and content competing for viewers’ attention. This morning, three back-t0-back sessions explored the disruption going on in this space.

It started with PwC’s Christopher Vollmer delivering a brisk run-through of some of his company’s research and predictions for the OTT market.

He noted new flavours in OTT, from the subscription video-on-demand market dominated by Netflix, Hulu and Amazon; the similar services launched by pay-TV operators; the advertising video-on-demand space epitomised by YouTube; and also channels and networks going direct to users like the WWE Network, HBO Now and Starz Play.

OTT is the fastest-growing sector in video, although it’s still a comparatively small portion of the overall ecosystem – but very influential in terms of driving trends: 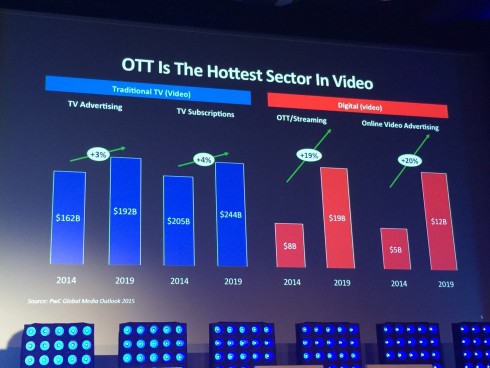 That includes consumer behaviour, including binge-viewing, and a change in the kind of content being watched by children: “a good indicator for where the market might be going in the coming years… their consumption is still weighted towards traditional viewing, but their preference is moving towards streaming,” said Vollmer. 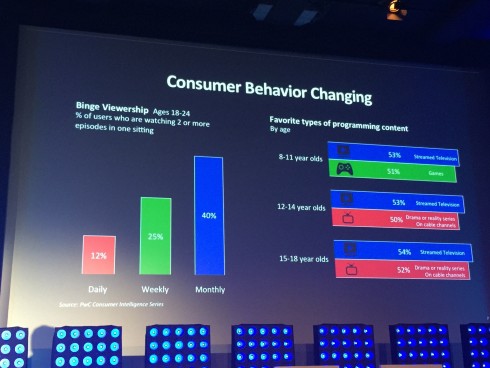 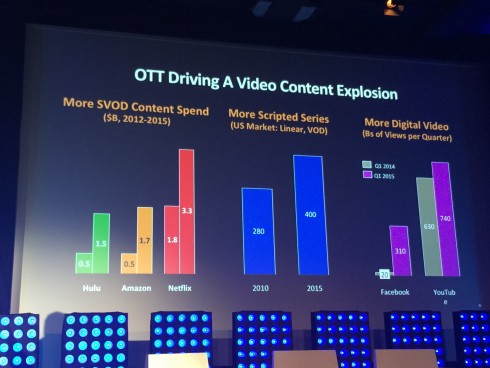 Vollmer also delivered a view of the future: “Perhaps we’re heading towards a future where TV is essentially a world of apps. It’s a big shift towards convenience and experience, but more strategically it’s also illustrative of being in a boundary-free environment.”

“Television is not just movies and TV series, but it’s right next to games, right next to shopping, right next to social media, photos, personal videos, a whole bunch of things competing for consumer time and attention… How as a television-focused brand or player, whether you’re a network or a player, how do you compete to be relevant in that kind of environment?” he continued. 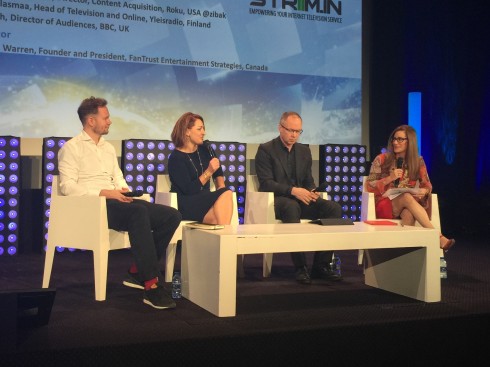 Next up was the ‘Broadcast: Simple as an App‘ session, exploring the way broadcasters are launching their own standalone, direct-to-consumer services – often delivered through apps – that sit alongside the bigger players in the OTT world like Netflix.

Kaboli-Gerbrands said that Roku doesn’t have its own channel store: “We don’t have an iTunes or Amazon Prime, so that helps us maintain a Switzerland-type [neutral]setting,” she said, noting that Roku sees a lot of broadcast channels going over-the-top with their own direct-to-consumer apps. Roku is trying to help those apps get discovered by viewers.

North talked about the way “the traditional model is alive and well” for TV, but that emerging behaviours among younger audiences are important to study, to understand their desire for “effortless discoverability of content… and look at what does that mean for our brand?”

The BBC is using this knowledge outside TV: for example, giving its Radio 1 radio station a presence on its iPlayer video service, as well as YouTube, based on its understanding that Radio 1’s youthful audience is moving to those platforms in great numbers.

Kuulasmaa talked about Yleisradio’s plans to move into podcasts, as well as user-generated content through a new platform that will “give the old media into the use of the new-generation creators” through vlogging and other UGC videos.

North warned that on-demand is still a “relatively small” part of audience’s engagement with the BBC’s content, stressing that a lot of viewing remains live. Meanwhile, Kaboli-Gerbrands said that Roku is getting lots of inbound interest from broadcasters about its platform. “People see, by and large, the benefits of going over the top direct-to-consumer. It’s a matter of ‘when’, but the ‘how’ is very important.”

Kuulasmaa said that the TV industry needs to bring in younger executives to make the most of this new OTT, direct-to-consumer world, with the new kinds of content that it requires. “There is this big shift. You see me as the head of TV and online, but I’m the youngest director there. I’ve been working with the youth content, so it’s all about giving the space for youth to create, and also hire a new generation into these institutions, and then see what happens. Until then it’s ‘we are doing this kids thing, this youth thing’ and it’s not real… You really need to push in a new breed.” 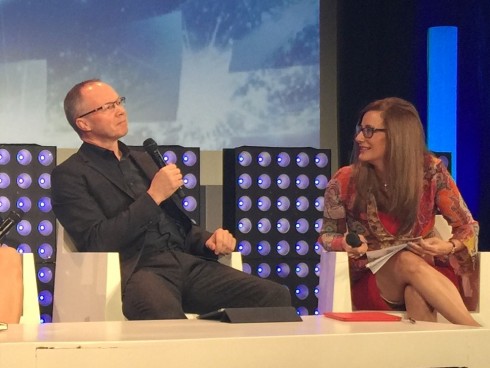 Warren asked North about how the BBC plans to take its shows beyond the UK to the rest of the world. “We have a big change program going on, myBBC, which is building the sign-in functionality, building customisation, personalisation, personalised recommendations, opening up a new way for a more interactive relationship with the audience,” he said. Initially this will focus on British licence-fee payers, who’ll be able to use their devices to access BBC content while abroad.

“But the role of BBC Worldwide is of growing importance, and we have big ambitions for that not only in the distribution of content and the channels that we run, but also in terms of new services. We have a new service planned, an OTT service, that will provide more access to British talent and creativity,” he said. “We did experiment with an international iPlayer for a while. We’re going back to the drawing board and thinking perhaps these new OTT services: once we have built the technology for support of sign-in in the UK, we are perhaps in a position to review that.”

Kuulasmaa talked about new content formats: Yleisradio already shows e-sports – people playing video games competitively for an audience – as it shifts “from the broadcaster to a deepcaster – personalising your experience”. And that includes a move towards a world where as a viewer “you are curating your own feed” rather than being tied to a schedule, or even just picking individual shows to watch on-demand.

Kaboli-Gerbrands talked about TV apps, saying that Roku sees “a big trend in linear and longform” as the two sectors increasing most in usage through the company’s devices. “There’s a lot more of the linear viewing. And it’s a matter of how you are developing that app. In the living room, it’s a lean-back experience,” she said. “While somebody may pull up the CBS News app on mobile and watch things on-demand, on Roku when you go to that channel you get a linear feed, and you see a huge audience for that.”

North finished off by talking about multi-screen behaviour. “It’s evident that there is a great deal of multi-screening happening today, and we expect that to grow. When we look at our iPlayer stats, we see the biggest growth being iPlayer through TVs – watched through the TV screen… that is where the growth lies for video, on the big screen,” said North.

“When we look forward and think about where are we going to be in five years time, for me it’s less about coming together on one screen, for me it’s more about the growth of social to change what we understand as entertainment today. What we’re thinking about is OTT: is this a threat to TV, is Netflix a threat to TV? No it isn’t. It represents a small part of what people want from TV. But social will grow and become the primary activity: the kid sitting there with the TV on, but they’re on their [mobile]screen. So it’s where the attention lies from screen to screen.” 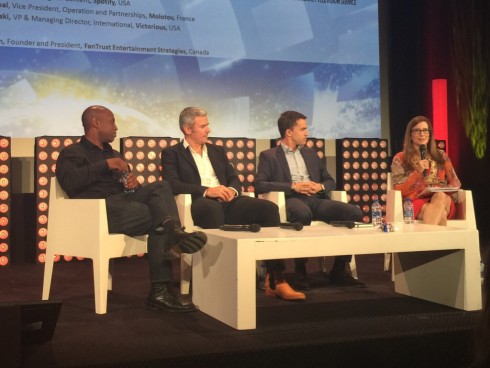 Spotify’s Baxter spoke first, about the 75m people who use Spotify, and the role it plays for them. “The past 20 years of the music industry have been all about disruption. Our mission at Spotify with the original content initiative is to look at the deep data we have on our audience base, and start to program that with deep diversity of content… We’re not just a utility, we’re part of the ritualised experience of their life,” he said.

Zameczkowski talked about Victorious, which aims to help creators, celebrities and media companies to build apps to foster their “superfan audiences”. He explained how the company differentiates itself for those clients. “YouTube is addressing a broad fanbase, but Victorious is embracing the superfan communities,” he said. Victorious’ apps include plenty of video: messages from YouTube creators to their fans, for example.

Denoual talked about Molotov, and how live-streaming video may be disrupting television. “TV is quite decreasing in audience, and young people are not willing to consume the TV on a TV set,” he said. “We do not want to disrupt the TV industry, we want to disrupt the way they are distributed.”

Baxter joined Spotify from BuzzFeed: has he brought models and lessons from that world to his new role? “The biggest thing that I learned is just that making sure you create content that’s applicable for the platform, and I think that’s what we’re doing now for Spotify. In the industry you have a lot of people coming from the traditional TV world and trying to create content with a traditional three-act structure and designed for a lean-back experience,” he said.

Baxter talked about the difference between platforms. “On YouTube it’s typically more about information and cute cats, whereas on Facebook it’s about content that identifies with your specific experience… so it’s taking the lessons of the specific touchpoint and creating content based on that touchpoint,” he said. 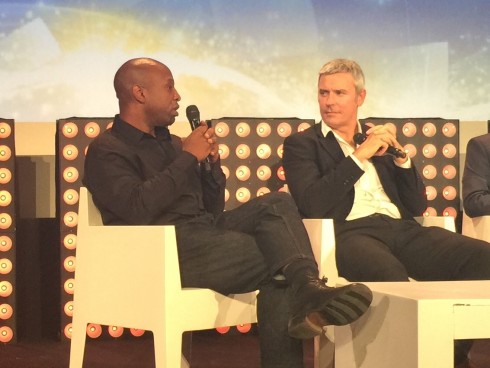 Zameczkowski talked about the difficulties creators have on social platforms, and how Victorious thinks it can help: “They basically rent their audiences, so we see strong frustration, because they want to own their experience,” he said. “Interaction is really difficult on a primary platform like YouTube or Facebook. On YouTube basically the only way to interact with the creator is the comments below the video… and it’s very hard to have your entire business model based on one platform like YouTube, because the CPMs are not high, the fill rates are not high. So you need to explore new opportunities to generate additional revenues.”

Denoual talked about Molotov’s work with live TV streams on its service. “YouTube is doing well for UGC, Dailymotion is doing well in France and Europe in general. So what we want to focus on is not to disrupt that, but to help TV networks address the new OTT world,” he said. “We want to give a new experience of TV consumption: we have implemented some live functions, some sharing functionalities… and we will open in the coming weeks in France.”

The panel were asked about windowing. Baxter: “We’ve got some relationships in place where we are licensing some content from publishers but we are also working on original stuff,” he said. “We are rapidly, as we experiment with different genres and formats… we’re actively working on different strategies for windowing, for IP ownership and for licensing.”

Meanwhile, Zameczkowski talked about the importance of data for the creators that Victorious works with. “There is no middleman any more. They can go straight to the audience, and get more data,” said Zameczkowski. “We are in the service of the creator, and the creator can own the data and interact directly with his fans.”

Denoual had one last zinger on what he sees as the downside of traditional linear TV. “Content is wasted on television… because it doesn’t reach the audience,” he said. But Baxter had the last word:

“Spotify is a rambunctious teenager who’s getting ready for college right now. Kinda set in his ways but also hoping for new experiences,” he said, describing the company’s “pivot” with its original content initiative.