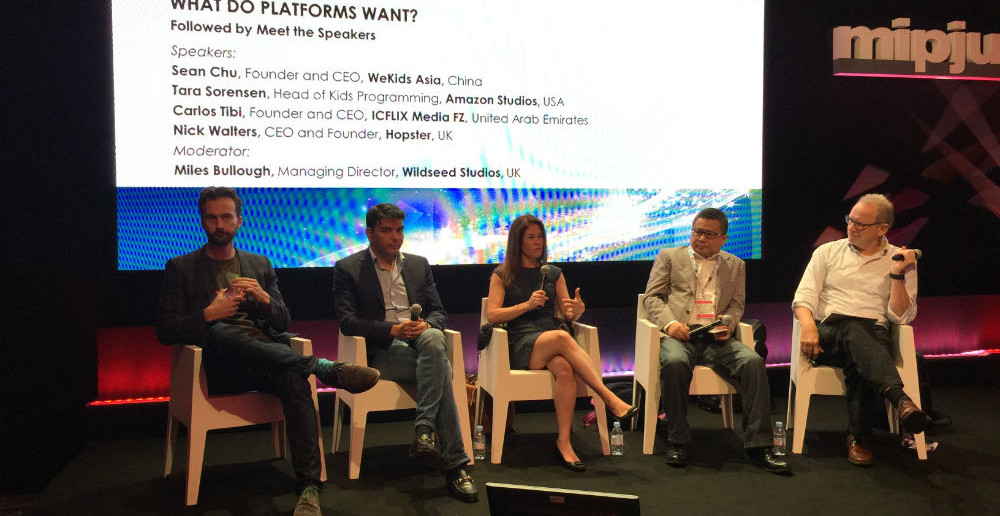 Liveblog: What do platforms and kids want from children’s TV?

Children’s TV is evolving rapidly, both in its content and distribution, not to mention the way it’s consumed by kids. A pair of sessions at MIPJunior this morning highlighted current trends in this area.

The first focused on what platforms want. The panel  (l-r in the photo above) comprised Nick Walters, CEO of Hopster; Carlos Tibi, CEO of ICFLIX Media FZ; Tara Sorensen, head of kids programming at Amazon Studios; and Sean Chu, CEO of WeKids Asia. The moderator was Miles Bullough of Wildseed Studios.

Sorensen talked about Amazon’s audience. “We’re not just going after kids, but we’re going after their parents, because they’re the Prime customer,” she said. “We do want to make sure that everything is kid-relevant, kid-focused. Everything that we do in pre-school has an educational objective, which focuses on creativity.”

In 6-11, Amazon isn’t looking for educational content, but it is looking for positive role models. “Anything that is scatalogical or violent in nature doesn’t really work for us, because of the parental piece,” she said. She wants stories with a heart, often grounded in live-action but with the potential for fantasy elements – she cited drama Annedroids as an example using the latter, with its CG robots.

Tibi talked about his service’s desire for educational shows, but also combining live-action and fantasy. “We look for very specific hero characters that appeal to both the parent and the child,” he said. ICFLIX is keen for formats that it can localise for its Middle East region.

Walters noted that Hopster focuses purely on pre-school children aged 2-6, and charges parents a monthly subscription. He said this isn’t a niche product. “We have a very mass-market subscriber base, very widely distributed… and a very wide range of incomes. We’ve demonstrated that there’s a real mass-market for very high-quality subscription products for kids,” he said.

The panelists talked about how they look for ideas. Tibi said he likes to see early-stage ideas from producers, including projects that ICFLIX produces as “original” shows. Walters said Hopster started by licensing in shows from producers and distributors, and while it’s not commissioning full 52-season runs, it is interested in projects with strong ideas around video and interactivity “whether it’s an app, or whether it sits in our app”.

Chu said that WeKids Asia acquires complete programming, but also has eyes on pre-school educational content and toy or game-based properties for older kids as its next step. Meanwhile Sorensen reiterated that Amazon tends to option shows at an early stage, and will commission a bible, pilot script and artwork, and sometimes fully produce a pilot for testing with its Prime Video users.

What makes a great creative partner for these platforms? “Our ideal partners are people who think entrepreneurially about the content that they have,” said Walters. Chu added that WeKids is working on film co-productions and introducing new characters to the Chinese market. “We are happy about what we have, and are looking forward to finding more in this market.”

Chu is also keen for exclusivity on the projects that it signs, although Walters said Hopster takes a different view. “We’re not going to take all your rights: we’re going to leave a content creator in a much stronger position than they would be working with a broadcaster.”

The panel talked about what kind of shows worked, with Sorensen praising those that “hold up a mirror to our audience” with relatable children on-screen, while Walters talked up the value of interactive elements for children to explore once they’ve watched a show.

What are the gaps in these platforms’ offerings? Each panelist talked about their wishlist. “Open play and creativity are really big themes for us,” said Walters. “We would like to find something that fits the Chinese market with unique design and a strong character and story,” said Chu. “I’m looking for 6-11 animation that I haven’t seen before that’s kid-relevant and parent-approved,” said Sorensen.

Shows with riper “scatalogical” humour – think fart and bottom jokes – are common on commercial children’s TV networks, but with platforms like Amazon and Hopster trying to get parents to subscribe, is there no place for those kinds of shows on these services?

Sorensen pointed out that Amazon does buy in other kinds of shows for its Prime Video service. “There is a broad spectrum within our service. But when we’re looking at an Amazon original, I want to make sure a parent isn’t horrified if they catch sight of a show that we’ve put in front of their child!” she said. 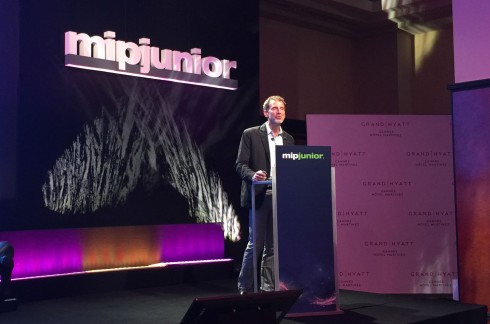 What about those children though? The next session was titled What Do Kids Want? and saw British research firm Dubit’s SVP of global trends David Kleeman presenting its latest data on children’s viewing trends, split into four themes and based on its surveys of 1,000 families in the US, UK and other countries.

First: top content themes among 2-15 year-olds. When children were asked to rank-order different content types, Comedy / Sitcom came top, ahead of Action / Adventure and Science / Nature / Wildlife. Kleeman added that Sci-Fi / Fantasy and Horror have both shown an increase in popularity over the last two quarters. The former driven by anticipation for Star Wars, and the latter by the buzz around mobile game Five Nights at Freddy’s “which has really gone viral among kids”.

Second, Kleeman looked at some of the top children’s brands in the US, UK, Turkey and Brazil “across the mediaverse” in an open-ended question, rather than giving them a list to choose from.

In the UK, it’s Candy Crush, Lego, Angry Birds and Minecraft too, while in Turkey Candy Crush dominates with Subway Surfers and Angry Birds also popular in a mobile-heavy market – with local brand Pepe also popular. Mobile games were also among the most popular children’s brands in Brazil.

Kleeman also noted that children can have a startling range of brands that they like: “We have kids who are listing Call of Duty and Peppa Pig as among their favourite brands,” he said.

The third theme was trends in children’s video consumption across devices. In the living room, kids are still watching live TV, while there’s also a rise in watching video-on-demand on televisions. On tablets: “Their two top sources of video are YouTube and Netflix. We’re seeing on tablets a big shift way from broadcast television and growing use of VOD and online video,” said Kleeman.

Meanwhile, on smartphones kids are most interested in using games and social apps, but Kleeman said that another important trend is the way children split their consumption of big brands across different platforms.

Fourth: challenges and recommendations. Kleeman talked about a “consolidation conundrum” where the way children are spending more time on tablets is fragmenting their world. “Right now, if you are being watched on a tablet you compete against everything: you are one home button away from the internet, social media, apps, games, e-books, everything,” he said.

That’s lots of content jostling for a still-limited amount of attention. “We find that kids only have three favourite brands at a time, so if you wanna be one of their top three, you’re going to have to knock something out,” said Kleeman.

Dubit’s recommendations to adapt to these trends include going “deep over broad: make sure you’ve got enough content to keep them happy”; breaking out of traditional TV scheduling but adapting to “emotional scheduling” based on what time of week or day it is, which affects children’s habits; and working hard to make early adopters of your brand loyal, as they will be the children who become your evangelists, sharing it with their friends.