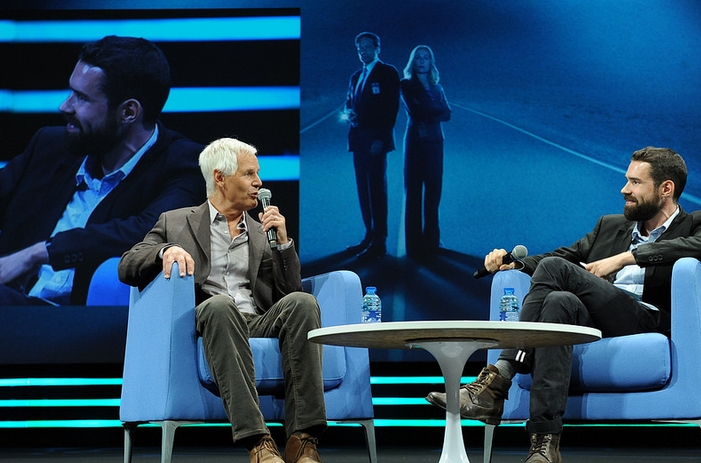 Liveblog: Chris Carter talks new X-Files: “Believe it or not, I’m a sceptic”

After premiering a new episode at MIPCOM, creator answers questions on its future
By Stuart Dredge on October 6, 2015 0 Comments

The X-Files creator Chris Carter appeared at MIPCOM today after a premiere of a new episode of the iconic show, to answer questions on how it came together, and what may lie in its future. Télérama’s Pierre Langlais (right) hosted the Q&A.

Did he always have in mind that one day the series would come back? “I never imagined that I‘d be sitting here in Cannes introducing more television episodes! It’s surreal. It’s really a dream come true for me to do something. I’ve been doing this now for roughly a little over a third of my life. I jumped at the chance to do it,” he said.

“Every day I look at the newspaper and I see a possible X-Files episode, so this is obviously something that – I did it for a long time and you never quite lose the eye for what would be good X-Files storytelling. It’s a perfect time to come back with the X-Files considering global politics.”

Carter said he always describes himself as “equal parts of Mulder and Scully”, and has always said that this is a long story about faith.

“It’s about my faith as well. My faith in science. Believe it or not, I’m a sceptic. I’ve never been visited by aliens believe it nor not. It’s a story about the modern pursuit of science by scientists,” he said. “If it weren’t for the science, this would be just another show about the paranormal.”

Carter said the new six-episode series isn’t pretending the characters are younger than they are – “even though they look fantastic – I think you’ll agree” – noting that there are several years of personal history to fill in between the last X-Files film (when Mulder and Scully were a couple) and the first episode of the new show.

“The reason I think the show is popular and has been successful these many years is really David and Gillian and the characters of Mulder and Scully. If not for them, the anchor wouldn’t be there,” he said. “We’ve told good stories along the way, but without those two characters and their involvement, I think you’d have had less of a show.”

He continued. “They both have been on a personal quest. Scully is still a scientist through and through. Her heart lies in reason and logic. And Mulder’s heart lies in the truth, and the answers lie beyond the pale, beyond the realm of what is accepted science.”

Carter said that this is not quite a full new season of the X Files, given its six episodes. “It’s a very brief season 10, even though it took us a long time to make this show. It took a long time to get going. There was a chance we were going to make seven episodes so there were lots of questions unanswered,” he said.

He also expressed confidence about the longevity of their partnership. “Mulder and Scully will be in wheelchairs before they are wheeled off-stage!” said Carter.

How has X-Files adapted to changes in technology since the last series? “Mulder and Scully used to walk around with giant cellphones. They now have the internet and they didn’t have that in the beginning, so much has changed. We’re trying to be honest with the changes dealing with digital technology, the capability of spying. Clearly we’re being spied on in the US, or at least spying on you. And there seems to be no shame in it.”

Each of the new six episodes will take place in the US, said Carter, before moving on to the changes in the television world since the last series of X Files. How has the new show adapted?

“I think the show is true to its time. It’s as modern as the time it’s being filmed in. It’s certainly being filmed with the modern technology. Our stories are contemporary stories happening now, some of them ripped from the headlines. I think this show has kept pace with time,” he said.

“For the future of X Files, if we are to come back, I think you’ll see us come back with these mini-series, if you will. Special events… We used to tell a story over a long saga, 22 to 25 episodes. Now the arc is much sharper, from one to six. So I think we pack a lot more in to these six episodes.”

Carter added that “modern television asks that you kill off a main character very quickly. I can tell you that… well, I’m not going to tell you!”

He talked about the actors returning for the new series. “The actors were very happy to come back. But the exciting thing for me was beyond David and Gillian, who wanted to do it – they came to me really, we had a breakfast one morning and talked about this – but the important thing in who came back is the original writers of the show,” he said.

“I love working with friends, and so I’ve developed many friends over the years, so it was wonderful for me. We had the first production meeting and it was very emotional: gathering people back together, some of which had worked on the original pilot.”

Why was everyone so eager to come back? “The writers probably did the same thing that I did: pick up the paper every day and see that there were stories to tell. And two fantastic actors to tell these stories with,” said Carter.

Will the show be giving up on the ‘monster-of-the-week’ episodes familiar from the original show in favour of a slower-burning six-episode arc? “The show was originally mythology episodes that were scattered alongside the standalone monster of the week episodes. We do in this six-episode arc a combination of those two things,” he said.

One new character with plenty of potential is Tad O’Malley, an internet conspiracy theorist broadcasting on a thinly-veiled YouTube equivalent called MindQuad. What was Carter’s interest in this character?

“Right now in the internet there are 500 conspiracy sites, and there are people like Tad O’Malley out here who have got the public’s attention. And I’m interested in these people,” he said. “Tad O’Malley for me is a combination of many of these personalities who are talking: they’re alternative media folk.”

Asked about the future potential for new episodes, Carter was optimistic. “I love telling X-Files stories. The truth is out there! If we satisfy audience expectations, certainly there’s an opportunity,” he said.

A member of the audience asked whether Carter will be bringing back the Courier font on-screen in the new series. “Actually we searched around for a font that we like and kinda modernised the show a little bit. I happen to like that Courier. I think it was American Typewriter actually. But thank you for noticing!” said Carter.

Finally, he was asked how much duty he felt as a writer to pay homage to the show’s existing mythology? “It’s hard. That mythology got very complex and very dense in some ways. And people went with it, which was the amazing thing,” he said.

“People followed the mythology, and some people said it was hard to follow or maybe too dense. We had to be honest to it coming back, and we’ve done that here with what we’ve done, and what we will be doing.”