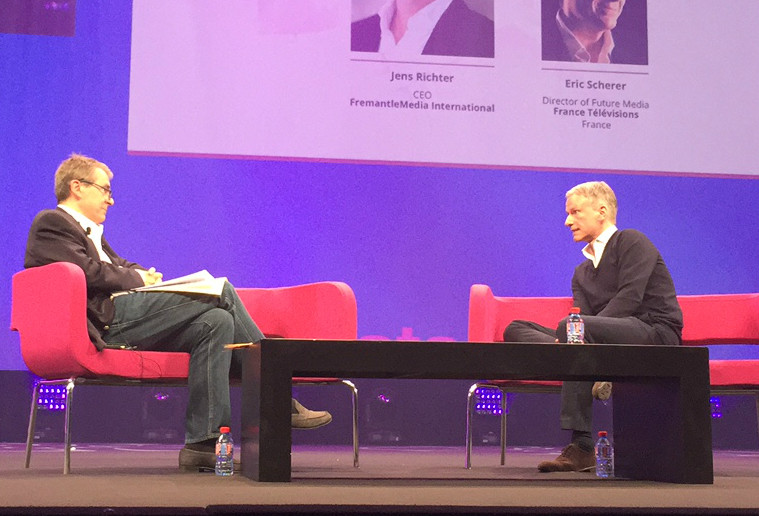 Jens Richter and Yang Weidong give MIPFormats their views on market trends in back-to-back keynotes.
By Stuart Dredge on April 11, 2015 0 Comments

The final pair of keynote sessions in the first day of MIPFormats 2015 presented a fascinating contrast. First, there was Jens Richter, chief executive of FremantleMedia International, providing his assessment of current TV market trends, as well as what might be coming next. He was followed by Yang Weidong, senior vice president and president of Tudou.com at Chinese internet TV company Youku Tudou, talking about his company’s work – including licensing international formats like Big Brother. Both were interviewed by Eric Scherer, director of future media at France Télévisions.

Richter spoke first, on the job he’s been in for three months now, and the wider market. “It’s all changing very dramatically and very quickly” he said. “We are starting to live in these two worlds that are developing.” Richter talked about his three children aged five, six and eight, and his experience putting on a “lovely movie… 15 minutes later I come back, and these three boys: that screen was off, they all had an iPad on their laps, watching three different shows and talking about their shows! I wasn’t sure what to think about that. It makes you think, definitely.”

Richter said his mission is twofold: to be the custodian of the existing FremantleMedia brands, but also to build new brands – whether for commercial, pay-TV or the Netflixes and Amazons of the industry. “At this stage, you start to put different ingredients in your recipe,” he said, admitting the need to develop new shows for viewers younger than 30, as well as those for the traditional audience.

What big trends is he seeing? “All the big companies, we work on the next big super-formats. It’s a question of how and where that will come, and when it will be,” he said. “Broadcasters are mostly risk-averse. When they are big talent shows, we need 40 or 50 hours of your programming space. Would you give that for a brand new programming idea that hasn’t been tested anywhere?” So he suggested that while there is growth in “mid-sized” entertainment shows being launched everywhere: “Is there still a time for the next big super-format, and how will it be… and what will be the role of social media in those?”

FremantleMedia’s latest scripted series is The Returned, airing on A+E in the US, and on Netflix elsewhere in the world. “In the drama space, formats play a very important role,” he said. “You had the first wave of drama formats coming from the UK, like Shameless, and a couple of Latin formats coming to America as remakes like Ugly Betty… and now you have a French format,” he said, noting that the first four episodes are pretty similar between the French and US shows, but then from episode five the new US remake goes in a “completely different direction” – not least to make it more sustainable for multiple series.

Netflix have the world rights, with new episodes debuting on its service “day and date” with their airing on A+E, at the rate of one a week. “There’s some very exciting differences. In the linear world you pretty well know what’s the right stuff for which broadcaster in English territories. Now with the arrival of Hulu and Netflix and Amazon, they do not broadcast, so they can test.” So FremantleMedia has been placing a lot of foreign shows with Hulu and Netflix in the US, and getting their feedback on whether there’s an audience for them. “Netflix never gives you the numbers but they give you an indication ‘well that sucked’ or ‘that was great’,” he said. “A certain kind of non-English [show]does very well on SVOD… The market is getting a little bit more open.”

He stressed that the company is striving to keep its flexibility, from choosing new countries to enter to picking new genres to explore. Scherer asked about acquisitions, and any plans. “Selective,” said Richter, citing the investment in a new UK drama company called Corona as one example. “And we are very active in the digital space.” Most recently with a digital production company within FremantleMedia UK. “Digital is a very strong focus with us.” 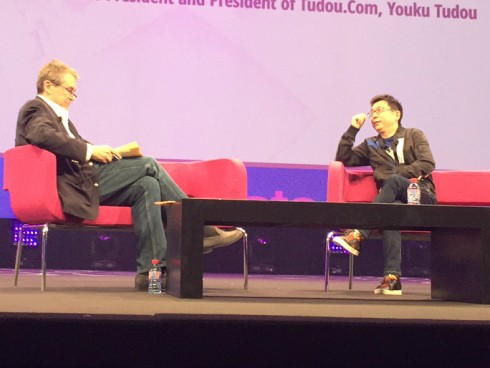 Over to Weidong from Youku Tudou, which is often described as ‘the Netflix of China‘, although Scherer suggested that may be selling it short. The company has two video platforms: Youku is more mass-market, while Tudou is more focused on a younger audience: 15-30, whereas Youku is more 30-55.

“We have reached 900 million users in China,” he said. The NASDAQ-listed company makes its money in multiple ways. “The main business model for us is advertisements. From the last quarter of last year, our paid members increased very quickly, now we have one million people to pay the yearly membership.”

He talked about the differences to YouTube, Netflix and Hulu. “It’s YouTube plus Netflix plus Hulu,” he said, of Youku Tudou. There is a large catalogue of user-generated content, but it also licenses lots of shows from producers and networks, from drama to documentaries. And then it also produces original content, with the latter growing rapidly.

What kind of shows is the company looking for, from foreign producers? “Not all programmes will work in China,” he warned, stressing that the US and Europe are particularly different. “Maybe we share a similar culture with Japan and Korea,” he said, while noting that The Voice has been a popular show in China. “The most important factor for us is can we adapt this format into local formats with strong local insights?” he added. “When we do some business with a global partner some of the partners will say ‘no, our format cannot be changed… you just do the localisation, you can’t do some adaptation’. But from our experience, if you can’t adapt the format, it doesn’t work.”

Is Youku Tudou planning to expand to other parts of the world? So far, not, mainly because China is such a big market to target – although it has some business operations in Japan and South Korea in terms of production. Scherer asked whether the company is interested in news shows. “In China, news is very sensitive!” said Weidong. “So we need approval from government. Then we can start a news business.”

Trends in China? “More and more young people leave TV in China, because the TV stations are run by the government. So all the contents will be controlled by government. And you know, the internet is much more better. But the government will do something with the internet now.” And 70% of Youku Tudou’s traffic now comes from mobile devices, he added.

The final question: what will the next big steps be for Youku Tudou in the next three to five years? “China is a very exciting market, and also the income of Chinese people becomes higher and higher. So more and more people, especially the younger people will pay more money into entertainment. We think this is a great opportunity for us. We are the number one media site in China,” he said. “We think this is a great opportunity and great potential for us to do big business in China.” And he finished by addressing western firms: “If you can listen to our inputs in terms of local insights and local behaviour, lots of global companies can share in the benefits of the China market.”