TV Trends Web Review — Can Snapchat and Vine become the networks of tomorrow?

As TV faces disruption from all sides, should networks be worried? Not so fast! Things are often more complex than what they seem...
By James Martin on February 18, 2015 0 Comments

“Is Hollywood broken?” The assertion is obviously strong and bold, and may even sound over-pessimistic – but when it comes to the entertainment industry, these are definitely rules-changing times. As The Atlantic notes, the app economy is now “bigger than Hollywood” – in other words, the web has officially become more important than “traditional” content in terms of revenues: “there’s a growing sense that the products of the sector we usually call “tech” are attaining cultural primacy—the web is the new TV.”

Where does this leave us? Variety recently interviewed 22 of today’ most influential media executives, pointing out that “industryites are grappling with profound concerns that cut to the heart of the traditional models to which Hollywood has adhered for decades.” All the masterminds share the same analysis though: as it faces disruption from all sides – falling ratings, new entrants, inadequate audience measurement, etc. – the whole TV industry needs to adapt.

But what kind of disruption is it facing exactly? We’ve seen new entrants like Netflix and Amazon compete with “traditional” players and become key content producers and distributors in recent years. But nowadays, the new competitors are called Snapchat, Vine and BitTorrent, to quote but three of them.

Just a few days ago, Snapchat became a media portal by introducing Discover, a new section that will feature “news articles and video clips from media partners such as ESPN, CNN, Vice & Cosmopolitan”, Mercator Labs reports, which will give publishers “more access to the millions of young Snapchatters.” But the platform is also interested in original content: VideoInk writes that the social startup is broadcasting its first web series, “Literally Can’t Even.” Each episode, of course, disappears after 24 hours… And there’s more: AT&T announced that it would use Snapchat to launch no less than a scripted superhero series, according to Variety.

Vine is on the rise as well: the video platform already has worldwide famous stars, like French creator Jerome Jarre, The New York Times points out. Last but not least, BitTorrent itself – the company known by many for enabling piracy via its sharing protocol – is partnering with content creators and owners, and notably with Rapid Eye Studios: “all projects commissioned and created under this partnership will be labeled as “BitTorrent Originals,” with BitTorrent retaining a 30 to 60 day first-run window,” VideoInk reports.

Once more, content is king: the ultimate goal for any of these competitors is to produce its own original content. In this context, it’s no surprise that Netflix aims to launch as many as 20 original series each year – as its chief content officer Ted Sarandos declared at NATPE a few weeks ago, according to Broadcasting & Cable. The SVOD platform is even raising $1 billion more debt to that aim, Variety writes.

What about the now 10-year-old YouTube? The Guardian reminds us that the Internet giant has changed since 2005, hosting content from its first ever video “Me at the Zoo” to an extended, exclusive interview with the US president, published on January 22 on the White House channel (watch it above). Now, what does the future hold for the platform? Not only does The Guardian predict that current YouTube stars are “more likely to continue focusing on YouTube” than to jump at the chance to become “proper” TV stars, it further writes that 10 years from now, YouTube’s rivals in the online video market will be “Facebook, Apple, Google and Amazon, but also Netflix, HBO, and perhaps even Snapchat if its youthful audience grows up keeping their habit.” Again, it’s no wonder that the platform focuses on original content: its head of originals Alex Carloss announced at NATPE conference that this new premium content from top creators will debut by the end of 2015, VideoInk reports. 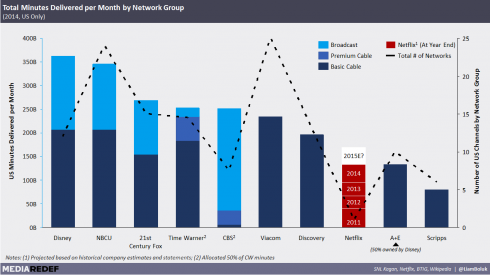 What’s left for “traditional” TV in this fast-changing online landscape, where today’s leaders can become tomorrow’s followers? In a must-read post, MediaREDEF sums up the challenges facing TV as we know it. Stressing the fact that networks still deliver more minutes per month than online channels and services (see chart above), it concludes on a positive note:

“Television” has finally been freed from the confines of the past. It can now be as rich, personal and multi-genre as any given viewer wants. Oddly enough, it’s the “established” TV giants, flush with cash, IP, and portfolio scale, that are best positioned to create this experience. It may still be early for this transformation, but it’s essential that they start planning today.

Today’s apps may well be tomorrow’s networks, but in the end, it’s still all about TV viewers’ experience!

Discover more TV industry knowledge on our TV Biz News page, where the hottest business developments are curated by the MIP Markets team, via scoop.it… And see you at the MIP Digital Fronts in April to witness the latest innovations in the digital content marketplace!