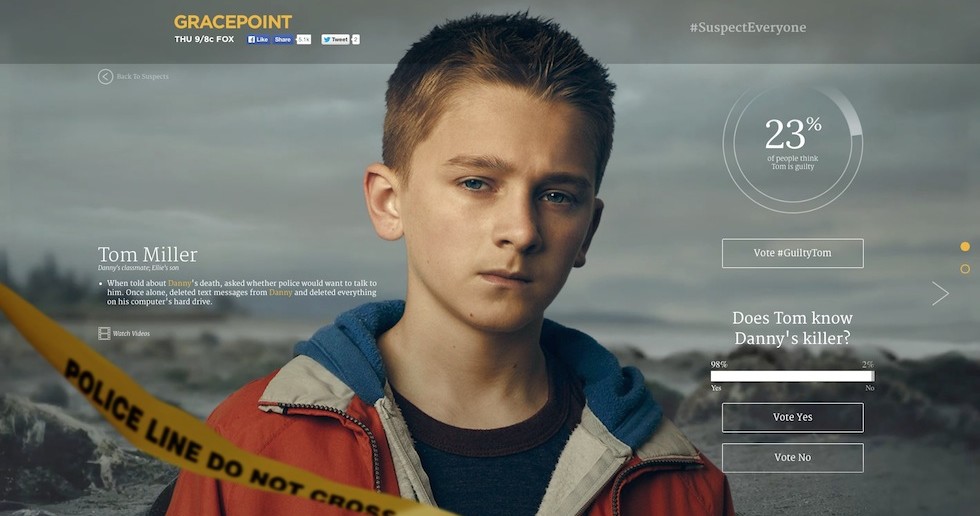 What shows are raising the social TV bar right now? Find out...
By Matthias Puschmann on November 6, 2014 0 Comments

For their new crime drama series Gracepoint, which premiered on October 2, 2014, FOX launched the accompanying website ‘Suspect Everyone‘. During and after the episodes, fans are called upon to vote on who they suspect to have killed twelve-year-old Danny Solano, the murder victim from the first episode. The website is powered by Spredfast. Before voting on the characters they suspect to have killed Danny Solano, users can review the available information and evidence concerning the murder including a video with footage from the respective episode and interviews with the cast of the series.

Fans can vote for as many series characters they want. Under each character portrait, the percentage of votes is displayed. Users can browse through the characters with the arrow buttons on the left and right. Users get more information on each character, including for example their whereabouts when the murder took place or statements they made, by clicking on a portrait. The character page also features a voting button allowing fans to vote for the character with the respective hashtag on Facebook or Twitter.

For each character, fans are also provided with ‘Gracepoint Profile’ videos in which the characters are introduced through scenes from the series and interviews with the actors. For some characters, there are additional voting questions. In addition, viewers were encouraged to tweet clues hinting to the identity of the murderer they spot during the episode with the hashtag #WatchingGracepoint. 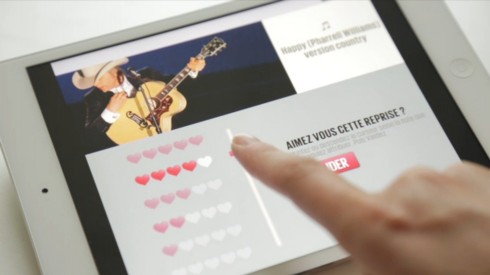 On October 15, 2014, the live talent show The Cover premiered on French channel D8. The show is presented by former Nouvelle Star TV host Cyril Hanouna and produced by his production company H20 Productions. The talent show has no traditional judges. Instead, viewers at home vote live on 12 different cover song performances for each episode by using a specially designed second-screen voting tool. The different artists come from all around the world, all carefully selected by D8 which went through hundreds of online videos of cover songs to look for talents.

To be able to vote on their favorite performance, viewers need to download the official D8 mobile app which is available free of charge for iOS and Android devices. The newest version of the application features a special “The Cover” voting section, available through the main menu. To access the voting section, users need to sign in with their Facebook account or create a profile by entering an email, password and username. If successfully connected, the voting screen is updated in near real-time throughout the live broadcast of an episode and allows users to rate a performance with up to five hearts. Alternatively, viewers can vote on the performances through a widget on the official D8 website.

The first round of the show consists of four matches, each consisting of three different artists competing against each other, with an elimination at the end of each match. During a performance, a countdown at the bottom of the TV screen indicates how much time is left before the voting closes. After every performance, five guest stars give their opinion, even though they have no real power over the outcome of a match. To find out who the winner of a match is, each artist stands behind a video wall that will only rise in full for the artist with the best voting result. The designated winner will then move on to the episode’s final round.

Only second-screen users are provided with the exact voting results on their second-screen device, making for an exclusive users experience. In the finale, the four remaining contestants perform their cover song a second time to determine the grand winner of an episode and the voting process repeats itself. The winner of the night is awarded with check over €10,000. Over 800,000 people (3.7% audience share) watched the first episode of “The Cover” and more than 150,000 votes were cast through the official D8 app. Moreover, the hashtag #TheCover became a worldwide trending topic. 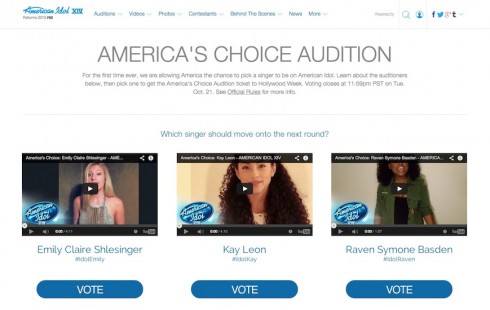 The 14th season of the singing competition American Idol will premiere on January 14, 2015. For the first time, fans have the opportunity to vote for their favorite of four auditioners in the ‘America’s Choice Audition‘ on the show’s official website. The singer getting most votes by the fans in the online voting will become a contestant on “American Idol” and directly advance to the so-called Hollywood Week.

On the show’s website, fans are provided with videos of the four singers performing. From October 16 to 21, they could vote for their favorite by clicking on the ‘Vote’ button or by using the hashtags found below each video on Facebook or Twitter.