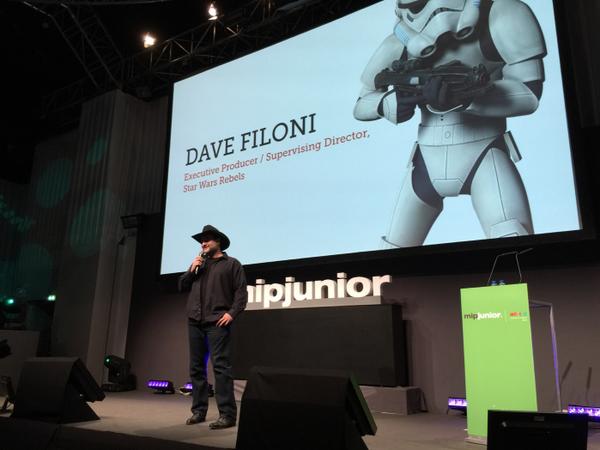 He was joined by Disney's Gary Marsh to talk about the latest in Star Wars storytelling for TV.
By Stuart Dredge on October 12, 2014 0 Comments

With new Star Wars films on the way, anticipation is building for Disney’s continuation of the galactic franchise that it acquired in 2012. But before those new movies hit the big screen, fans are enjoying Star Wars Rebels, a new animated series set in the Star Wars universe.

At MIPJunior today, two of the key figures in bringing Star Wars Rebels to life gave a keynote on how they did it. Dave Filoni (photo) is the showrunner for the series, which is airing on the Disney XD channel, while Gary Marsh is president and chief creative officer at Disney Channels Worldwide.

“It is less than two years since Disney bought Lucasfilm,” said Marsh. “When that happened, there were a lot of doubters out there, a lot of bloggers writing about ‘Mickey-Wan Kenobi’… And they were really daring us to mess it up!”  And he talked about the realisation that before the debut of the film, Episode 7, there would need to be something to stoke anticipation. “It was a nearly impossible task given what we expected creatively,” he said. “What we have come out with is quite extraordinary.”

He handed over to Filoni, who has worked closely with George Lucas on the previous Star Wars animated series, Clone Wars. “One thing he felt was important was that we would never treat any content like animation as any lesser than the films that he made,” he said. That has carried through to Star Wars Rebels: to not change what Star Wars is, but to maintain and be faithful to the world and its stories.

Filoni talked about Star Wars’ broad appeal across ages and countries. “It has to have a broad reach of characters: you can’t just rely on Luke and Leia… we have to give each new generation of kids a new generation of characters to follow.” And he added that humour – “the funny” is what binds a lot of Star Wars threads together, admitting that comedy was one of the things lacking from the Clone Wars series.

Filoni talked about some of the aspects of the new show: the music, for example, is more inspired by the soundtracks from the original films than it was in Clone Wars.

He also showed a scene involving the heroes stealing a TIE Fighter, which he related back to his own childhood games. “When I was a kid, I had a TIE Fighter that I’d put the good guys in, because it was so cool,” he said. “It goes to show why I think it’s so important that we distribute these stories and get them out there, that kids are inspired: they role-play Star Wars and play with figures… Maybe we’re grooming the next director of Star Wars. It’s possible!”

Filoni gave some fan facts: the team used lenses from the original Star Wars Episode IV: A New Hope film – the very first one – and developed its own film-grain technique that goes over the final render of Star Wars Rebels, to give it a 1970s sheen. And all the sounds – those TIE Fighters again for example – are authentically based on the original films too. “That’s something important for fans of Star Wars: having that authentic experience when they go back to this galaxy… and when they pass it on to their kids, who are coming to this for the first time”.

Filoni said authenticity of sound is a theme that carried through from Lucasfilm’s work on those original Star Wars movies, not just specific sound effects for individual weapons or spaceships, but the sound design of its environments. “They feel more like real places than most fantasy films tried to feel before,” said Filoni.

Star Wars Rebels features big action set-pieces, following in the footsteps of those original films. “A lot of our action is actually inspired by Indiana Jones… Indy will inform the audience right off the bat ‘here’s a problem, here’s how I’m gonna solve it’, but then other two or three problems emerge that he didn’t foresee… and that’s what drives the tension,” said Filoni, who hopes that tension will also drive repeat viewing for Star Wars Rebels. “I want kids watching Star Wars all the time. I spent so much time making this, I want them to be obsessed with Star Wars. Because I was!”

Filoni’s enthusiasm was infectious. “All of us, why we got into this industry: we want to inspire, we want to give something to future generations that get them excited, that lead them down a path that will hopefully be better than it is worse. And in an odd way, Star Wars did that for me, so I obviously felt very strongly about it when I got to Lucasfilm,” he said.

Might any of the characters from Star Wars Rebels pop up in the films? “I’d say there’s always a chance. Given that it’s all one big universe, you never know. I would say it has to make sense for the time period. Episode 7 is quite a long time after the time period I’m in… But the excitement of generating Star Wars content for people is it’s going to be more connected than it’s ever been, and that opens up exciting opportunities.”