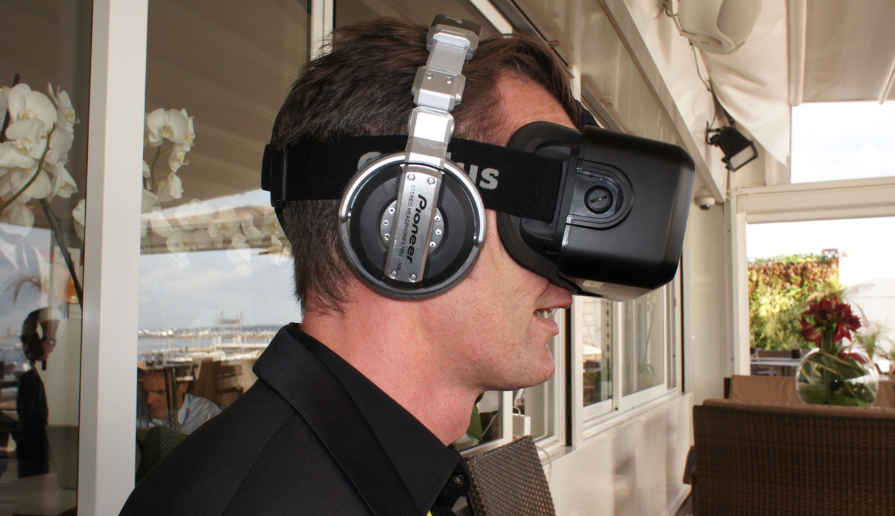 Triple IT is demoing the virtual reality tech here in Cannes. Naturally, we had to try it!
By James Martin on October 14, 2014 0 Comments

In his MIPCOM keynote yesterday, James Murdoch of 21st Century Fox cited virtual reality (VR) headset Oculus Rift as the most exciting technology to watch in entertainment in the next five years.

Rather conveniently, Netherlands-based Triple IT, a company specialised in “innovations for the TV industry,” (according to Matthijs Wolff, the company’s head of sales and marketing), has brought the Facebook-owned VR tech to MIPCOM.

Why? “When the headset comes out — most likely next year — there will be a lot of entertainment applications,” said Wolff, whose company notably worked on Talpa’s Utopia. “So we’re talking to producers here, to see where this could go. Education is needed on the creative side of the industry. People need to get the feel of VR — that’s what this demo is for — and then the ideas and business models will need to come from the (TV) industry.”

And so, to the demo: we put on the headset, as well as headphones for the sound, then it’s off we go! The demo in question is a ride on a mini rollercoaster, made by games developer Epic, with a toy train set around a virtual living room. The quality of the graphics, close to photo-realistic, is truly impressive, as is the feeling of total immersion. You can look up, down, behind you: you only ever see the virtual world you’re in. The only problem is a slight lag on the image whenever you move your head. But if you stay relatively still, the illusion is complete. Especially when the rollercoaster drops down a steep slope!

The implications for the TV industry could indeed be huge. The rest, as Wolff puts it, is up to you! Contact him via Twitter if you fancy a demo here at MIPCOM.