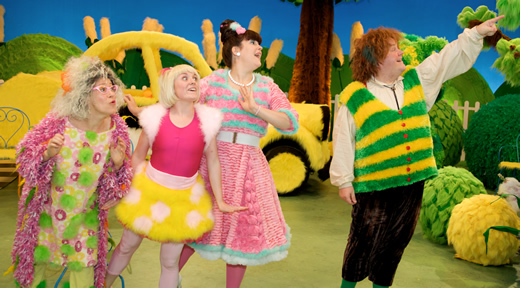 Interview with Mellie Buse, Adastra Creative: “Kids are masters of the multi-screen experience”

Why are TV shows now emerging out of digital offerings? Find out with Adastra Creative's co-founder Mellie Buse.
By Debbie Macdonald on August 21, 2014 0 Comments

Mellie Buse is a children’s and family content producer, writer, script editor and creative consultant. Together with her writing colleague, Jan Page, she set up Adastra Creative Ltd, a writer-led independent TV production company in 2006 which has produced five series of the top-rated CBeebies shows Grandpa in my Pocket, along with a successful stage version, and the pre-school live action show Ha! Ha! Hairies. Mellie is now heading up the development of new content across all platforms at Adastra Development Ltd, which she co-runs with Martin Franks.

MIPBlog: What’s the most innovative thing in kids entertainment right now in your opinion, and why?

It’s safe to say that current innovative trends are largely to be found in the digital space – games and apps. Since Moshi Monsters and Bin Weevils hit the big time on the web, every developer has been looking for next Holy Grail. And, until some smart geek invents something else, the platform of the moment is the tablet. Minecraft is riding high – a kind of digital lego that taps into the universal human fascination with building things out of bricks. In many instances what kids used to do on the carpet with toys, they’re now doing on screen. Minecraft is an entertainment phenomenon that has absolutely captured the imagination of kids. It’s innovative because it doesn’t bear the hallmarks of really glossy games. It’s pretty fundamental, by its own admission. It just struck a chord and bingo! The kids love it. The How To Train your Dragon brand, born out of story, is another one that’s really resonated with the audience on so many platforms. Mind Candy’s newly launched Popjam, a social media platform for kids, is one to watch. Its USP is that kids can explore, create and communicate in a monitored, safe, social networking environment.

> Why does kids TV have such potential for innovation? Do kids have a different relationship with technology than adults?

For traditional programme makers the technology now available enables us to push the boundaries of storytelling, budgets permitting. Mixed media shows are a huge plus for kids because they can deliver the magic and the fantasy that’s universally loved in children’s storytelling. And now the magic can be made truly interactive so kids can experience brands beyond traditional TV in all kinds of involving and stimulating ways. And we know that kids are masters of the multi-screen experience. The digital offerings are now not simply adjuncts to a TV show. In fact, TV shows are now, as we know, emerging out of digital offerings. And yes – technology is second nature to kids. They can find their way round the digital world with the kind of ease that makes my jaw drop to the floor.

> What’s your favourite IP now and why?

There’s a lot to like. I’m not a games person so the IPs launched on the digital platforms aren’t going to ring my personal bell. In TV, however, on the drama side CBBC‘s Wolfblood takes a lot of beating. The scripts are incredibly well crafted, the production value has “prime time” written all over it and the performances are terrific. It has a huge following and deservedly so. CBeebies Katie Morag has also pushed the boundaries and is just the kind of programming that had sadly disappeared from the schedules for a long time. For younger kids I would single out the utterly charming Lily’s Driftwood Bay. This is a beautifully produced animated series on Nick Jnr and PBS Sprout. You can tell it was made with a whole lot of love, a singular creative vision and not an ounce of cynicism. It has real heart. You don’t look at it and say “There are the toys!” Peppa Pig, which I have always loved, started out the same way. And look what happened to that!

> How do you see the (near) future of kids entertainment?

With all the innovation in the digital arena, we’re in danger of losing sight of what really resonates and matters – story. We define ourselves, from very early on, in terms of narrative. Children need good, well structured, aspirational story delivered to them in an inspiring and uninterrupted way. The “uninterrupted” is important, in my view. Being immersed in a wonderful narrative, transported to another world, either by watching a film, a TV show or reading or listening to a book, is the most enriching and educational experience we can give our kids. I’m optimistic that, in spite of all the exciting gizmos, the bells and whistles, the knobs to press, the screens to swipe and the user generated quick fix content that the technology makes available, the basic human need for good story, well told, will prevail. It might be that it will pop up on new platforms, but pop up it must.

> With the revival of many UK classic brands, do you think Broadcasters are becoming more risk averse?

Broadcasters are conservative by nature as they have to watch their ratings and please their boards, their audience – or the parents of their audience. If, as a content developer, you want to go experimenting in a big way then get thee to the theatre or on line. The real reason for the current risk averse trend is a fiscal one. Shows are incredibly hard to finance. Is it any wonder that tried and tested classic brands and shows that have originated as popular books, are the ones that tend to get commissioned over and above original content? The trend towards old brands isn’t because of a lack of imagination on the part of commissioners or an appetite for nostalgia among the audience. It’s an appetite for “playing safe” among financiers and licensees. As a producer, if you go cap in hand to an investor with a sparkling original idea, they’re less likely to take a fly on you than if you go with something that’s already proved itself in the market, however long ago – something that makes them feel warm and cosy and secure. And you can’t really blame them for that. Networks don’t put sufficient funds into their children’s coffers to commission enough to fill their schedules without relying on producers securing investment. So TV content is increasingly dictated by the finance models currently in place. But finance models change and new platforms emerge so cautious optimism prevails.  Always.

Mellie Buse is one of our pre-MIPJunior 2014 kids entertainment ambassadors. These posts are coordinated by Debbie Macdonald, a children’s media consultant. She was formerly VP, programming director at Nickelodeon UK, having worked in acquisitions at the BBC. You can find her on LinkedIn here.