Sandra Lehner: Why the World Cup will be the ultimate multi-screen event

50% of viewers will watch the tournament via second screens when it kicks off today, says The Project Factory's commercial manager.
By Sandra Lehner on June 12, 2014 0 Comments
Sandra Lehner

The 2014 World Cup 2014 is here! The tournament kicks off today, with a match between Brazil and Croatia. With over 50% of viewers intending to watch, cheer and obsess over the biggest global sporting event via second screens, this World Cup will be the most social, and the most multi-screen to date.

During the 2010 FIFA World Cup, football fans spent over 26 million hours viewing content online, resulting in the largest online sporting event in the US to date. Four years later, smartphone usage is through the roof and a new audience survey from YuMe, a leading provider of digital brand advertising solutions, found that live streaming will be popular across all devices, with computers acting as distribution points for 33%, tablets 22%, smartphones 11% and smart TVs 13%. The survey also found that 16% of those asked intended to call in sick to work during the World Cup specifically to watch the matches. Naughty, naughty!

At AdWeek Europe, ESPN also shared some interesting facts around multiscreen use in sports. According to their research, sports fans are 33% more likely than others to be ‘multi-screeners’. In addition, 21% of sport fans regularly use a second screen during live games. Apart from live streaming, football fans mainly use second screens to check world cup scores, follow news and headlines, and engage with social media. As a result, ESPN’s app for the World Cup features in-depth analysis and commentary from their team of experts. Fans can customise their experience by choosing their favourite teams to follow and set detailed alerts for everything from in-game substitutions to team stats. Furthermore, users in the US can see exclusive video highlights from the matches. 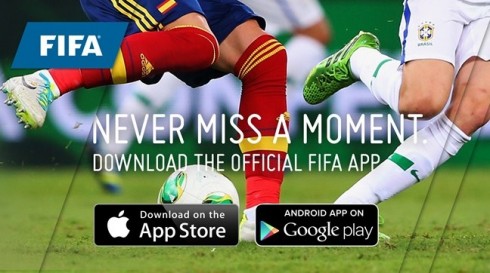 FIFA has also launched its official mobile app (photo), and is already predicting it will be the most-downloaded sports app of all time, with more than 70 million downloads predicted in the first few months from launch. The app notably includes real-time social media conversation features for matches; a feature which is bound to boost multi-screen viewing during the tournament.

Video will be a key platform for the UK’s FA (Football Association) moving forward. It expects to post around 40 million videos on YouTube and Facebook from June to July. Already 64.7 million hours of football videos have been watched on YouTube from mid-April to mid-May. The Real Madrid YouTube channel has 1.3 million subscribers, the channel of the Bundesliga has 270,000 subscribers, and the biggest independent football channel, Copa90 (watch their MIP Digital Fronts session here), has almost 700,000 subscribers. Copa90 plans to deliver a whole new perspective on this year’s World Cup as they become one of the very few partners to arrive on the Xbox platform as part of their ‘Destination Brazil’ interactive programming. Copa90’s Hyundai series World Cup Cities, World Cup Taxi alongside Eli’s Fan Stories are available to all Xbox customers around the world, allowing millions of new fans to get stuck into the next generation of football. 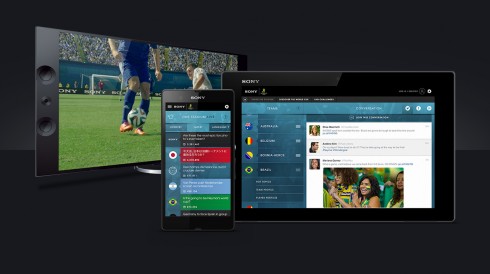 Given the explosion in second screen devices and the size of the potential global audience, the World Cup 2014 could be the single greatest mobile advertising opportunity. Coca-Cola has begun its Brazil 2014 World Cup marketing campaign, with the aim of placing pictures of one million football fans on a flag, which will be unveiled before the opening game. According to Coca-Cola’s global group director of digital strategy and content Neil Bedwell, Coke’s World Cup Tumblr campaign aims to tell the story of fans from all around the world as they prepare to watch the tournament, and to highlight the power that football has to unite. Sony has also created a single online platform, called One Stadium Live (photo), bringing together conversations and content across Twitter, Facebook and Google+ before and during the World Cup. It should also be a great platform for dual-screen football fans.

Twitter recently released some interesting facts around its UK users and football, finding 43% of UK users check results via Twitter. Furthermore, they expect 60% of all tweets during matches to be World Cup-related. Sony’s mobile-first website will highlight those hot social topics to give fans a snapshot of how the whole world is feeling about games, players, tactics and gossip.

So, how will you be watching? 🙂