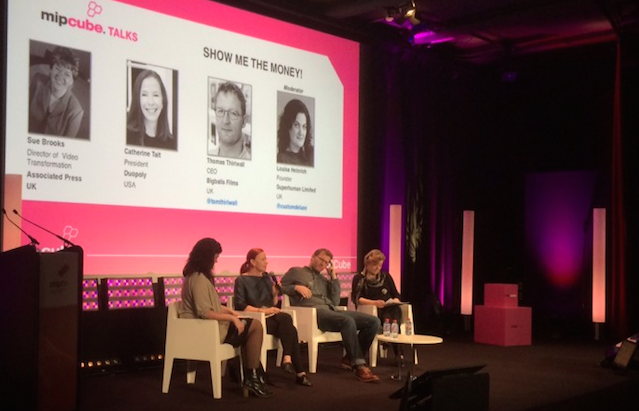 Liveblog: Show Me The Money from digital content at MIPTV

How do you make money from the constraints and opportunities of digital production, and how does it change the funding of content? That was the topic for a session this morning at MIPTV.

Tait kicked off, showing two digital projects – S.O.S and Space Riders – and a thriller called Guidestones. “The one thing that all three of those shows has in common is a budget of under $400,000, and in two of the cases we are producing a web version – shorter episodes of seven minutes long – and in one case we have created a TV half-hour… but with reasonable production values. At the end of the day, we are finding audiences, we are able to put these projects together, but nobody is getting rich fast.”

Over to Thirlwall from Bigballs, a film production business that has “grown up in this space… the whole world of digital distribution was the most natural place for us to start”. He said this meant from the start, the company couldn’t rely on commissioners to fund the kind of content it wanted to create.

He showed a trailer summarising 520 films it made in 2012 for a football channel called Copa90, which launched off the back of funding from YouTube. “You’ll hear a lot of naysayers sand doom-mongering about how you make money on YouTube and digital platforms. I’m here to tell you you can do it. You will have to lower your cost of production, and you will have to become a content entrepreneur. It’s not just about producing it and writing it and getting it out there. It’s everything else in between.”

Thirlwall talked about the “merged media model” of a company like Bigballs, operating somewhere between a publisher, an agency, a producer, a distributor and a retailer. “It’s all of those models that you’ve got to get your head around if you want to succeed in this new media age. We didn’t want to sit around until commissioners give us money and tell us what to do with our content.”

Next, AP’s Sue Brooks talked about how the world’s largest news-gathering operation operates digitally, including partnering with newspapers, whose websites are increasingly keen to add video. “It’s essential because it engages with a new audience,” she said. “Specifically engaging with a younger one. It brings a story to life, and we’ve done lots of research in the last 18 months that shows that. And it enhances a brand.”

Brooks added that she’s having similar conversations with brands, who are wanting to use video for exactly the same reasons. “But also for one other crucial thing: that’s that traditional advertising isn’t working any more,” she said. “When the first banner ad appeared in 1994, there was a 44% click through. Now it’s 0.001%. Somebody said not long ago that you have more chance of climbing Everest than you have of clicking on a banner ad!”