David Dufresne tells MIPDoc about his innovative documentary game, which focuses on a hot environmental issue.
By Stuart Dredge on April 6, 2014 0 Comments

One of the most intriguing documentary projects in recent times is Fort McMoney, which combines film and gaming aspects in order to explore environmental issues around our energy usage.

Director David Dufresne (second from right) appeared at MIPDoc this morning to talk about the project and its innovative transmedia structure. He was accompanied by Gilles Freissinier (left), head of web department at ARTE France, and Monique Simard, president and CEO of Canadian arts body SODEC. Jason Daponte of The Swarm (right) moderated the session.

Simard explained how the project got off the ground, harking back 5-6 years when the National Film Board of Canada started working in interactive productions, as well as traditional films. Then, four years ago, a new fund opened called The Experimental Fund to finance projects that were for platforms other than television.

“What attracted me was not only the form and the proposal, but the subject: the issue,” she said, referring to the controversial process of extracting petroleum from tar sands – which are particularly found in Canada. “It’s an issue that’s important to everybody on this planet… There was no way we could avoid talking about this. We’d done traditional films talking about the subject… but with this project not only would we target that format again, but in a format that was such a different and original perspective.”

Simard also said that the project was unusual because newspapers in Canada, France and Germany got involved as partners, before handing over to Dufresne, who explained the project itself. “The idea was to merge video game mechanisms, imperatives from journalism, and a documentary point of view,” he said. “I said ‘let’s do a SimCity for real! And they said yes, then I went home to my wife and said ‘I don’t know how to do it!’.”

Players of the game are tasked with getting “into the heart of the oil mines” while earning influence points, and thinking about the issues raised – all the while, playing alongside other people. It switches between video footage and interactive scenes, where players explore for clues and talk to characters. “The town is all yours. Explore it, control it,” as the voiceover put it, as Dufresne showed the game off. 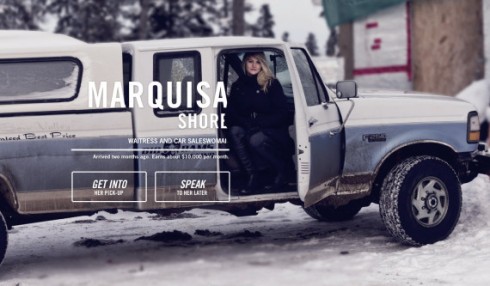 “The more you explore, the more you get points,” explained Dufresne. Those points then give players the ability to vote within a dashboard on a weekly referendum – for example: ‘Should oil be nationalised?’. “You can vote with your points, and you can change the city,” he said.

Daponte asked why he felt the SimCity strategy game genre fitted well with this issue. “The NFB told me it’s a great subject, but there is a problem in Canada: it’s called green fatigue. It means that people are not very interested by environmental subjects, films and documentaries,” he said. “And I said let’s do a game. The game is a tool to learn. The game is a tool to debate… A lot of people came for the game, and they stayed for the subject… Maybe if we did a classical movie it doesn’t work like this. And it’s very important to use the web tools to change storytelling. We can do that now: it’s so interesting.”

Freissinier talked about ARTE’s involvement in the project, and its desire to promote topics that can help people to understand the world they are living in. He also said it fitted with the web unit of ARTE’s mission to promote interactive productions. “The way to produce this project as a game-documentary was also a way for us to foster the creativity in the interactive production,” he said. “It wasn’t a web documentary as usual, but it as a new way to tell people how to understand a topic and how to participate in a debate. So it was very important for us to do that.”

Dufresne noted that the production process was quite different too. “You film and you change the story all the time,” he said. “A producer’s nightmare!” quipped Simard in response. “To launch it was a challenge in itself… Also, technology-wise there were things we didn’t know in advance. It was much more challenging than we thought at first. So we had to put in a lot more time and effort… We were testing and testing until ultimately the last second before launch, without being sure that it wouldn’t crash down! Everything in this project is innovative and new, and it’s been very, very exciting.”

As a surprise, Dufresne unrolled a giant poster outlining the structure of Fort McMoney, as its players make their way through the different branches of its plot – a poster so long, it needed five people holding it onstage: 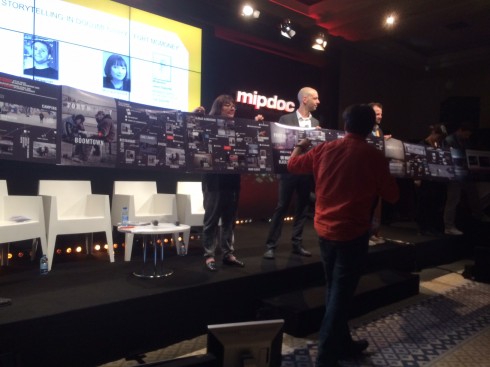 Freissinier noted that a more traditional documentary is now being made from Fort McMoney – it’s currently in the editing stages and will air on ARTE in the autumn – after attracting half a million visits to its official website in a few months.

One key question to finish off the session: how can these kinds of projects be made financially sustainable, if they’re not backed by public funding as in Fort McMoney’s case? There wasn’t an answer this time round. “We don’t make money from it. Let’s be frank: there’s no business model yet to generate money from this game. It’s all public money,” admitted Simard.