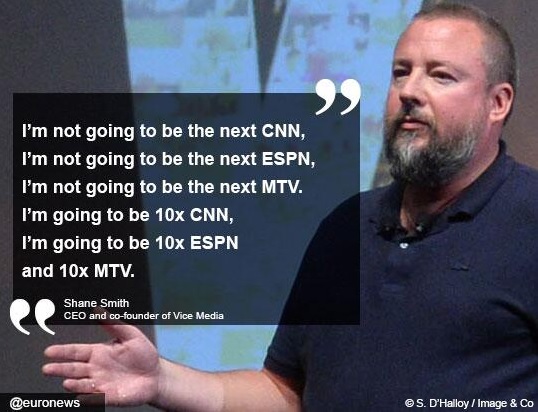 Liveblog: MIP Digital Fronts: Vice, the next generation of media?

“We’ve been developing online channels and brands for young people for the past few years,” began Moretti. “They cross all their passion points: Food, technology, sports, and increasingly news. Contrary to the myth, news is interesting to young people.”

Vice has 36 offices around the world, equipped with production facilities. These include New York, London, Berlin, Sao Paulo, — very soon — China (they just received their Chinese license). An office in LA is coming.

Below, a glimpse of what’s to come, and, when possible, content from each.

Fresh Off the Boat with Eddie Huang

“It’s a look at how food intersects with culture around the world. It’s not recipes; it’s beyond a formulaic look at food content,” said Moretti.

Noisey is a magazine format based on the online channel. “MTV doesn’t do music anymore. It hasn’t cared about music for a long time, but music is still a no. 1 passion point for young people around the world. There is no music brand that’s global that they can identify with; Noisey is that brand,” said Moretti.

In this show, underground graffiti artist David Cho travels to cities around the world, then in 24 hours finds each city’s dark underbelly — where they’re selling drugs, people, dangerous animals and more…

As Moretti explained, this is “a studio format — the first for us — hosted by a panel of young nerds who are funny. They go into the field and create documentaries on interesting innovations, come back together with young people in Brooklyn, and have a table discussion.”

“Sports content is maybe the most formulaic,” said Moretti. “It’s driven the most by big events on one side, then pundits on the other. We take a different look; to us, sports is an entry point into a conversation between cultures and communities around the world.”

“As a company we’re agnostic to political issues and parties. But we are committed to, and care about, the changing planet,” said Moretti. “Toxic investigates climate change and degradation, ecosystem degradation around the world.”

He added, “People say young people aren’t interested in the news around them; it’s bullshit. They are, and this show captures that enthusiasm for, frankly, saving the planet.

To conclude, Moretti said, “The offices around the world are filled with young people. They are making the content they want to see.” He also presented the HBO series Vice, a half-hour series where Vice takes a closer look at the topics they care about. It’s just completed its first season and was recently nominated for an Emmy. Below, its first episode, Killer Kids.

At this time, CEO Shane Smith hit the stage to give a few inspiration words. “What you’re gonna be seeing from Vice, coming forward, is — we’re coming. We are officially IT. And we’re gonna be on all platforms. When it’s holograms, we’ll be f***ing holograms.

“We can’t just have stick-your-head-in-the-sand shit anymore,” the firey Smith went on. “We have to say something. We have to say ‘if we don’t do something about the environment, we’re f**ked’. And if we don’t say that in media, then shame on us.

Follow the MIP Digital Fronts live from MIPTV, today and tomorrow, only on MIPBlog!