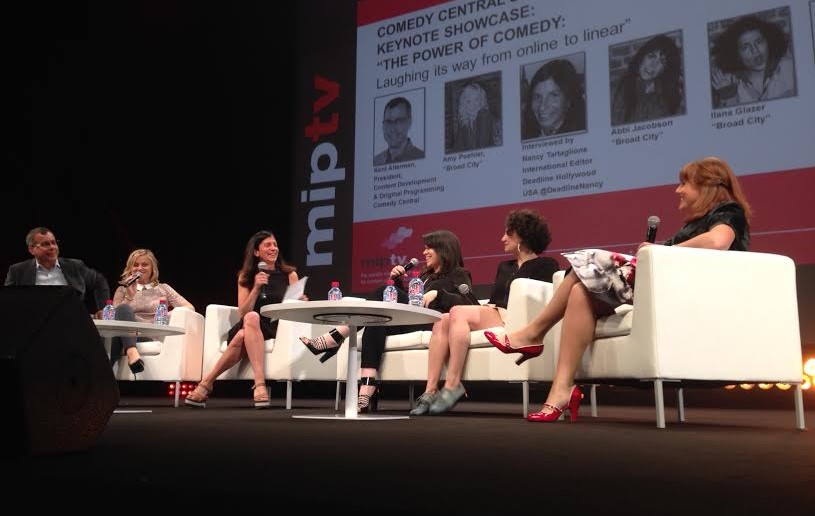 The actress and producer spoke at MIPTV about new web-to-TV series Broad City today, with cast and crew.
By Angela Natividad on April 7, 2014 0 Comments

It started over pizza, “as all good things do,” said Abbi Jacobson. Along with Ilana Glazer, she started writing sketches. Over time they found their stories were deeply New York-centric, situational and touchingly hilarious.

“We had these really quality viewers,” said Glazer. “If they watched one, they watched it all, and they shared it all. This was echoed on Facebook.”

Asked by Tartaglione whether they ever had ambitions for TV, Jacobson admitted that midway through their first web “season”, they decided to start treating show production more like TV. “We planned it out and started to really take it seriously. We started to pay everybody—”

“—first in bagels, then paper dollars,” Glazer quipped. “But there was momentum on the train, and people got on with us.”

Poehler got involved when she was asked, at random, to participate in one of the videos. “I’d heard about Broad City and seen their stuff online. They were shooting very close to my apartment, and it was an exciting afternoon. I immediately was attracted to their comedy, their chemistry and voice. I saw they’d been working very hard with very little and were ready for the next step.

Poehler went on, “It felt very organic ,as most good things tend to. It felt we were speaking a similar language, and that my experience could be of use.” She also wanted to produce and direct more so things came together. She notably involved Comedy Central’s Kent Alterman in the conversation.

In a way, it seemed like an intuitive fit for Broad City. “There is a myriad of fresh, interesting and really funny shows on Comedy Central right now” — of which Broad City is now one, Poehler said. “These big, new American comedies. It was a nice time to join that path.”

Tartaglione observed that Comedy Central also has a long history of pulling web series from the web, such as Drunk History.

Alterman expanded on the merits of pulling content from the web: “You can see [the talent], not just as talent but also their work ethic. What matters most is talent and creative vision, and that was clear [with Broad City]from the beginning.” When the girls started talking about how they’d start expanding to series, it also appealed to him. But “funny is funny. The thing that matters most is they’re hilarious, so appealing and so genuine.”

“They’re also getting a lot of male viewership,” Tartaglione said.

“As we expected,” Alterman replied. “I don’t think in terms of whether it’s male/female, black/white, whatever. Is it funny? Does it have a strong point of view?” If the show is about two women, he conceded that women will be more likely to watch. But that doesn’t make male viewership unusual.

Alterman also pointed to the web’s power as an incubator. “Technology’s gotten so cheap that anyone can have a camera and editing equipment. If people have a strong POV and vision, will, and an incredible work ethic that goes with it — if they express all those things, nothing holds them back, and the cream rises to the top. It gives people access to exposure.”

Which doesn’t mean that all things that work well online will work well on TV. “People confuse how many hits something gets with how well it would do. That’s irrelevant,” Alterman said. “It’s easy to share a cat playing with a piece of string, but that doesn’t necessarily translate to storytelling. What matters is the vision of the creators and their ability to expand it so they have full stories being told. And whether it will resonate as a show, and that’s independent of how many views it gets.”

It’s also been a reliable business model for Comedy Central, and for parent company Viacom. “For our buyers and viewers it’s a natural process to emerge from something that has a heritage from the social media and web world, then translates to a broadcast world,” said Caroline Beaton. “We have a pretty well-oiled machine” for integrating this type of transition.

“Broad City is manna from heaven,” Beaton added. “It rated well, we got [the humour]instantly, and also — what makes it easy to market and good for me to stand behind it — is that the girls aren’t working against each other, it’s a sisterhood. We like that … and our buyers like it too.”

Beaton also pointed out that comedy took the longest to make the transition from web to TV, but it’s also the most-shared. “Soon we’ll have a shared global comedy sensibility,” she said.

“This genre is absolutely universal, but it seems to be more shared in an online environment than in a broadcast environment. It’s my department’s job to change that.”

Tartaglione steered conversation back to the show, asking Jacobson and Glazer how close the characters on Broad City are to themselves.

The girls started to laugh. “We changed our names for this show,” said Glazer. “We amplify our differences because that’s funny to us, but it’s scary to us.”

“Ilana’s not as crazy as on the show,” said Jacobson.

“I do the neck moves or whatever, but… I like to go to sleep early. Know what I mean?” Ilana laughed.

That many of their storylines involve situations from their friends, or people they know, is also a “thrilling” feeling. For the finale, Jacobson’s mom called to talk about a certain situation — in the episode, the girls are at a restaurant, and Jacobson goes to the bathroom… where a condom falls out of her. “Who did that happen to?” her mother wanted to know.

“My mom thinks most things that happened to Abbi happened to another lady in the writer’s room,” said Jacobson in a stage whisper. “So… you guys keep that to yourself.”

Jacobson and Glazer also marveled over how their creative process evolved with the “legitimacy” of finding themselves on TV. “We used to write scripts on Gchat… now we have a room full of people that have their life experiences to add,” said Jacobson.

“It is crazy and amazing. Cramazing,” Glazer added. She also expounded on how creative restraints associated with TV helped improve their creativity. For example, when choosing music for the show, “we have to find these underground artists, and in a way it keeps us truer to our senses.”

Working with Comedy Central and Viacom has been a positive experience. “Our voice is pushed. It’s not a separate agenda,” Glazer stressed. “It’s such a progressive idea, to make Broad City the most Broad City it can be, not some version of another show.”

Poehler pointed to the show’s capacity to frontier for its demographic: “What makes it interesting, and what’s demanded now of shows, is diversity — in cast, in voice. It’s almost impossible to have a show about NYC with six white people in the same building. And you guys talk about it all the time — race and class. It’s a diverse room, a diverse cast. That’s what your lives are now, and what most 20-year-olds’ lives are: this mix of ethnicities, races, points of view. That’s what makes Broad City broad.”

Moving onto season two, Tartaglione asked whether the girls have people they’d like to ask onto the show, now that it’s in the big leagues.

“My dream is to have Frank Ocean,” Glazer sighed, changing tack and peering hopefully into the audience. “I think he’s the future of everything.”

Watch video clips from this and other MIPTV conferences here; full videos on our YouTube channel 2-3 hours after each session ends.

And be sure to read our exclusive white paper “Building the new digital content market”! Download here (email required)