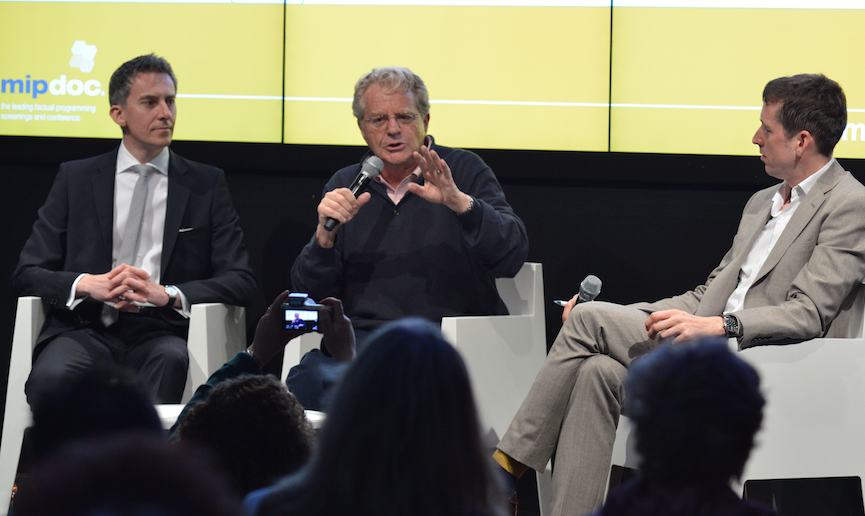 The crowd for his MIPDoc session today didn’t quite chant “Jerry!” like the host’s audiences used to… but they did pack the room to hear what Springer is up to in 2014.

Namely new “guilty pleasure” series called Tabloid, which will debut in April on Discovery Networks’ new international channel, ID Xtra. Springer was joined onstage by Paul Welling, SVP and head of channels for Discovery in Central and Eastern Europe, Middle East and Africa (CEEMEA), to talk about the new channel and trends across Discovery’s business.

Welling kicked off the session, interviewed by Stewart Clarke, editor of TBI Magazine, who noted that it’s a very interesting time for Discovery, having acquired Eurosport and starting to move into scripted formats. Plus ID Xtra – a more female-focused spin-off from the existing Investigation Discovery channel. It is currently in six countries across the CEEMEA region, with plans to be in 13 over the coming months.

“What we’ve found in a lot of our territories is that the audience demand is quite similar. We’re in a process of segmenting our audiences and delivering channels that work for the male audience… but also increasingly with the female audience,” he said. “ID Xtra is the newest brand that we are rolling out… There’s certain things we know our female fans really love about that genre: it’s the mystery, it’s the drama, it’s the suspense… ”

Welling added that as the channel grows, Discovery will consider commissioning original content, although for now, its successful launch in Poland has been more about “repackaging” existing shows with local stars. “We have a lot of content that comes out of the US at the moment. I don’t think that’s a problem – it’s not an issue for our audience,” he said. “From the US: slightly distant, is good, because it’s not in their backyard!” Shows will come to ID Xtra as quickly as possible after they air in the US, from a couple of days to 3-4 weeks.

On to Tabloid, the new Jerry Springer show that focuses on “the stories that made the tabloids famous… more than news, better than fiction!” according to its sizzle reel. “There are more lines on my face than I actually have in the show!” he quipped, telling the tale behind the commissioning of the show. “I don’t know why they called me. Maybe they were drinking…”

“We talk about the impact that the media has on our culture: ‘Look at these sensational shows’. Yet it’s one of these things that when you really think about it, it’s obvious why something like this would work. We as humans have always been storytellers. We are social beings. It’s what distinguishes us from animals. 5,000 years ago we would be talking about the same stuff. People would gather int he marketplace, in the town square or at the forum, and would talk about what’s happening,” he said.

“People are always talking about what is going on in their neighbourhood. The only thing that has changed is that with modern technology, our neighbourhood has now become global. people are obviously fascinated by human behaviour, and what we are doing here is just recognising that and giving back a story that is outrageous in term s of how most of us behave.”

Springer was asked whether he’d watch Tabloid himself, and was honest in his response. “The truth is that I don’t watch television. I work at it every day! You don’t wanna come home… If you’re a journalist, you don’t go home at the weekend and write a story. What I watch are sports and political news because I’m a political junkie. That stuff I love. I don’t watch my show: I’ve got some taste! I don’t even tell my family I’m Jerry Springer. They think I’m an insurance salesman! It’s horrible…”

He added that “none of us are above it… You could be an English professor at Oxford and if you came home one day and found, for example, your wife in bed with the next-door neighbour. You would not say ‘forsooth my dear, what is this I have found?’ You would act in the same way you see people behaving in these shows, cursing… This idea that we are better than the people we see on television. We should get over it. We may dress better, have got luckier in the gene pool of parents, but life is primarily luck.” 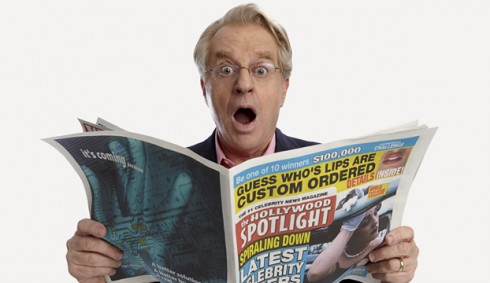 Does Springer feel responsible for how the talk-show format has developed, and now the popularity of documentary formats influenced by some of its more combative moments? “The Jerry Springer Show is now in its 23rd season. I would like to formally apologise! I’m sorry, I’ve ruined the culture,” he joked.  “But this concept that television has influenced human behaviour and the destruction of society is garbage. We had a holocaust before anyone had a television set… read Shakespeare, read the Bible, there is nothing on television that you see today that hasn’t been in the history of human civilisation.”

Clarke wondered whether Springer will ever top the moment a man married a horse on his show? “That was a wonderful show! But we did a follow-up show because the horse left him. And we always run that show about a week before the Kentucky Derby. It’s called marketing…”

But he returned to the theme of people not being better than the people they see on TV. “If I could take 20 people between the ages of 16 and 24, 20 people from every country, and put ’em in a room together, and let’s say you had interpreters so language wouldn’t be the barrier… We are identical,” he said. “Within 30 seconds the kids would be talking about who they’re dating, sports, what’s going on with school, did you watch this movie, did you listen to that song?”

Springer also had lots to say about social media, and the explosion in online chatter around all television shows – including his – that has emerged in recent years thanks to Facebook, Twitter and other platforms. “What is happening in the social media was inevitable. The coming of my show 23 years ago was inevitable. What we are observing, witnessing is the democratisation of culture. For thousands of years it was people sitting in an audience watching something happen on a stage, on a screen, on a ball-field. It was the audience and then the performers, whether it be sports, theatre, music, whatever,” he said.

Springer cited US broadcaster Phil Donahue’s show as a key point in this democratisation process, with the audience as important to the entertainment as the star and the people onstage. “And that moved on, and then came the internet, and all of a sudden the kids would go on the chatrooms, and they would start entertaining each other, and all of a sudden the programming picked up on that,” he said.

“So you have shows: America’s Got Talent, American Idol, Britain’s Got Talent… literally the audience are the ones that are entertaining, and the audience decides who wins, who our next stars will be. it used to be a couple of people sitting in New York or Hollywood deciding who the next singing stars would be. Now the public decides: we entertain ourselves. Whether you’re going on your cellphone or tweeting or whatever, that is the democratisation of society, aided by technology.”

Springer was asked what single thing persuade him to take the hosting job of Tabloid, and admitted that he’s lucky at this stage of his life and career that he doesn’t have to make a living any more. “Either I do things now because they’re important, which is the political stuff that I do, or because they’re interesting and entertaining, which is the show business stuff that I do,” he said. “It it sounds like a fun thing to do, and my wife thinks it’s okay… And the good thing is that she doesn’t want me home so much!”

Clarke wondered whether Springer would like to make serious documentary shows, and he agreed that he would, but that the show that made him famous on TV won’t be changing to include more politics. “The contract with the stations is very clear: the show is about outrageous dysfunctional behaviour. If you call us with a warm uplifting story, we are not allowed to run it! We have to send you to another show,” he said. “Would I like to do a political show, but sure, I can’t make the Jerry Springer Show that. Somebody would have to hire me to do a political show!”

The final question: what chance Tabloid: The Opera – as a follow-up to the popular Jerry Springer: The Opera theatrical production from the mid-2000s, which Springer wasn’t personally involved in, but enjoyed. “It could work, but I’d like to play myself!” he joked about a notional Tabloid version, before explaining why he enjoyed the original opera.

“My mother would have been proud: ‘Gerald! You’re in opera, you’ve got culture!’. I always thought that country music was my show put to music. But after seeing that, it dawned on me that really opera is my show put to music,” he said. “Because I’m a fan of opera, and our show has all the traditional themes of classical opera – the chanting chorus, the mock tragedy, the gender misidentification, the farce. It is opera! If our guests could sing, we’re there!”