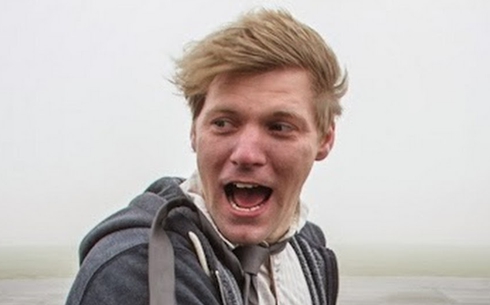 Colin Furze is a 32 year-old ex-plumber, ex-BMX hero, and now inventor and YouTube celebrity. He started on YouTube in 2006, uploading videos of himself and his BMX’ing friends from old VHS tapes. He built the world’s biggest bonfire and with the leftover wood made a Wall of Death, making films that have taken him from 300 fans to over 200,000 subscribers, who lap up his films about making, and using, his quirky inventions like the Cake-o-matic and Gadget Crutches.

Colin Furze: When I made my first few films and uploaded them, it was a bit easier than today. There were not many makers (inventors) on YouTube, and if you made a film like the one we did with a flame-thrower attached to my scooter, or the wall of death films, you immediately got on the home page. Back then, YouTube would editorialise the home page, picking out films they liked, and that guaranteed views.

Now, their software finds you films that relate to what Google knows about your taste, so if you’re into Rihanna videos you get more of them. So it’s harder to make a debut these days, and there is so much more content out there.

> How are your stats?

I’ve got over 205,000 subscribers, so a decent amount. I get about 50-70,000 views per day, across all my videos.  Views vary depending on how ‘niche’ the films are. At the moment, I’m uploading a series about building a 70mph mobility scooter, with a lot of engineering content that appeals to other builders, but won’t ever get the same number of views as the Cake-o-Matic film (above), which is always popular with a wider audience of 100-200 thousand views a week.

> Are you able to make a living exclusively from Youtube these days?

I don’t have to do the plumbing any more, I earn what I call a background wage from YouTube, from the advertising, but the films and their popularity have led to other work for brands and for TV.

I produce, direct, film and edit most of my own films, so my costs are pretty low, which allows me to keep making stuff – both inventions and films – without the restrictions a job would cause.

Yes, I get work making jet-powered mobility scooters for brands, and doing stunts with them for commercials, as well as bits of TV work. The main differences for me are time and health and safety. When I film myself, I can have a good idea and have it on YouTube in a couple of hours. For example, I often film myself driving a vehicle with a GoPro camera on a stick. You wouldn’t get that past the health and safety people on TV, and you’d have to plan it for days, or weeks and involve a whole crew.

I get asked to contribute to a lot of TV ideas, but often they come to nothing – there is a lot of pitching of ideas in TV and advertising – whereas on my own, I pitch my films directly to my audience.

> TV companies and brands are increasingly producing for YouTube these days. Is there anything you’d advise them to do or not to do?

It’s funny, as time has gone by I have learnt to become better at making video, my shooting and editing have got slicker and I’ve learnt a lot from working with TV companies, but sometimes I have to step back and de-professionalise my work. Last year I worked with a production company on a YouTube channel, Furious and Funny. I’d had a success with a film about the world’s fastest Pram, so we decided to make a similar piece about the world’s fastest toilet. It didn’t do as well, and I figured it was down to the slickness of the film: we followed the same format as the pram video, but because the TV guys are pros, the toilet film looked slick, almost like an advertising version of my original – and my audience didn’t like that.

I’m often asked by TV people, “given an unlimited budget – what could you make?” and now I reply, that’s not the point. The restricted budget, spur-of-the-moment, slightly rough round the edges stuff is what the audience wants on YouTube.

I really see TV and online merging, as people increasingly use devices that can access both. If you look at the 15-25 age range now, once they are the 40-50 year olds, things like YouTube will be their first port of call. It won’t be alien to them to consider the internet as a viewing platform, it’ll be the norm.

This is the latest in a series of posts about online producers, ahead of the inugural MIP Digital Fronts (April 9-10, at MIPTV), which will showcase all manner of next-gen creativity across platforms and MCNs such as YouTube, Dailymotion, VICE and Maker Stuidos. More info here…