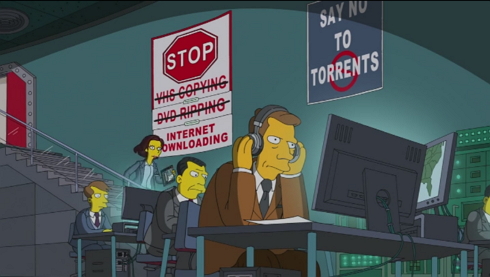 TV Trends Web Review: From Netflix to piracy, disruption is here to stay

Our latest digest of the past weeks' hottest news stories, as curated by the MIP Markets team.
By James Martin on January 15, 2014 0 Comments

Photo: The Simpsons’ recent take on piracy outlined the level of disruption the TV business has to deal with today…

The way we consume TV is changing forever, as new forms of production and distribution keep emerging in the digital economy. As the environment becomes more disruptive than ever, broadcasters and traditional networks keen to stay in the race should follow a few resolutions, according to Quartz: “cultivate more event programming” for instance; “break from the traditional 22 episode broadcast model in favor of smaller, cable-sized season”; and, of course “step up and compete” with the threat of the Netflix model.

The Silicon Valley-based company is indeed seen more than ever as a “Red Menace”, as Fast Company explains. Netflix possesses an “unprecedented stockpile of data about Hollywood entertainment” nurturing an impressive database of 76,897 unique ways to describe types of films, The Atlantic reports. Moreover, its acclaimed shows have started beating Hollywood at its own game: Robin Wright just won the Best Actress Golden Globe award for House of Cards, a “significant triumph” for Netflix as the series-producer, according to The Next Web. That is all the more infuriating to some as the internet firm doesn’t disclose any audience numbers in an entertainment industry driven by figures, as underlined by Fast Company.

Last but not least, Quora points out that “streaming now partly determines what even gets produced in the first place”: more and more studios make their decisions based on whether or not the streaming rights will be valuable, and for how long. This is the sort of negotiation where Netflix is king:

“If the content is non-exclusive, Netflix has now set the price for everyone else. If it’s exclusive, Netflix’s subscriber base means they can justify paying the most but really only need to outbid the next-highest bid by enough to get it to be exclusive. Otherwise, it goes non-exclusive and a studio can make more selling it to everyone, even if it gets less from each. That caveat is the check to Netflix’s power. It’s why there is still give and take”.

What is left for other broadcasters in the midst of this red tsunami? Let’s not forget that cable TV still contributes to more than 60 percent of Hollywood profits, as The Hollywood Reporter writes. But online platforms like YouTube are only starting to join the competition, and partnerships like the recent deal between the video platform and Dreamworks Animation – as reported by Variety – should be more frequent in the coming years.

AwesomenessTV CEO Brian Robbins emphasises the importance of these new players in a compilation of interviews with nine industry experts issued by The Wrap: “YouTube is not just a video platform. It’s a social platform as well, and traditional media companies are starting to understand the value of a two-way conversation.” At the same time, he warns TV executives: “Because younger audiences are watching video in so many different places, you need to build a business beyond YouTube as well. YouTube is a primary outlet and an audience funnel, but you want to package your shows and characters to be seen on every device and in every country.”

Other current trends for online video platforms include partnering with local search engines: global video service Viki just struck a deal with Chinese giant Baidu to reach its 237 million users and stream subtitle content in a country where Netflix and YouTube are still not represented, AllThingsD reports.

On the tech side, The Verge writes that 4K was heavily discussed at CES, where some companies – like Netflix! – positioned themselves to meet the needs of manufacturers and the consumer market by announcing ultra-HD streaming. Set-top box manufacturers such as Roku also made the news with announcements of branded TV sets to hit stores shortly, Fast Company notes.

But innovation hasn’t stopped piracy yet, and content is still key to success in the TV industry. Game of Thrones’ makers may not be bothered by the fact that their series is the most downloaded TV-show for the second year in a row, TorrentFreak points out, but the topic is still very sensitive among executives. In that regard, one of the latest episodes of The Simpsons (photo) is “an absolute goldmine for anyone interested in the file-sharing phenomenon”, according to the same source: after downloading from “The Bootleg Bay”, tracked by the FBI, Homer learns that “when Hollywood is the victim, no stone is left unturned”!