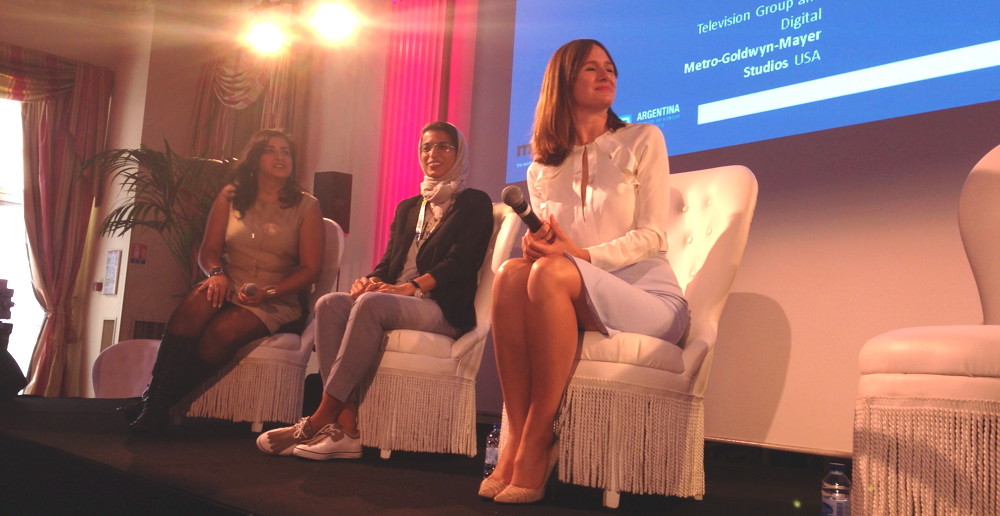 The second edition of this annual lunch united TV's most powerful women at the Majestic today.
By Angela Natividad on October 7, 2013 0 Comments

The lunch opened with an introduction by Nancy Dubuc, President & CEO of A&E Networks, and the panel itself moderated by Marisa Guthrie, television editor (East Coast) of The Hollywood Reporter.

“I like to think of this room as the women who get their panties in a bunch over P&Ls,” joked Dubuc, who — on a roll! — continued, “Our mission at Lifetime is to tell universal stories about today’s modern woman. Who knew she was a schizophrenic alcoholic potty-mouthed newswoman and mothers with a penchant for serial killing?”

More seriously, she pointed to Lifetime’s 30-year effort to dedicate itself to women’s issues, including teen education and breast cancer research.

Dubuc then passed the podium to Guthrie, who kicked off with a general question: are we truly in a golden age of television?

“The quality of storytelling we’re seeing right now is unlike anything we’ve seen in television since the inception of television,” said Khanna. “Stories have the opportunity to find their way to the audience one way or the other, and we are lucky to be part of that.”

“We watch TV more than film currently,” Al Kaabi said. “That’s because there’s good content at the end of the day.” But while she watches TV more, where she watches it has change “I’m watching online, or via my mobile device… or sometimes on TV.”

Mortimer jumped on the bandwagon, calling “TV at the moment… an incredible environment for artists”.

“It’s just been an amazing environment,” she said, going on to describe the creative and financial freedom she experienced in creating her latest show, Doll & Em. Ultimately, today’s television environment is “fostering artists and creative people in a way that’s very encouraging and exciting.”

Guthrie then asked Mortimer whether her creative process has changed now that she’s a producer.

“I’ve learnt so much, becoming a producer, but really it’s the same thing I learned as an actor: you ultimately have to take responsibility for yourself,” said Mortimer. “When you’re making a show… it won’t magically be good, you have to make it good. But I found it easier to collaborate with a lot of people as a producer because you don’t want to let everybody down.”

Khanna then responded to a question on how streaming services have changed expectations from a content perspective. “At the end of the day, it’s created another life, voice and platform for content,” she said, plus it’s created means of expression for old content — such as archives for classic films — and new content, such as Netflix’s highly-acclaimed House of Cards and Orange is the New Black.

“It’s another outlet for storytelling and creators. How the models work over time, how sustainable those models are, we’re all gonna be part of that process figuring it out,” she said. But it’s also deeply rewarding from a consumer perspective; while they likely feel confused sometimes, or inundated by options, this is also a period of experimentation and taste-testing for them.

Khanna also elaborated on the unique advertising pressures that cable companies experience: “In cable, a lot of this stuff is really about building your brand. Brand is everything. It’s about building your relationship with the brand and the brand’s relationship with your audience. And when History does something like Vikings, they’re wrapping a flag around this thing and saying ‘this is what we’re about’ — but the dollars are coming in every minute of the day, and it’s not just about that particular show.”

A “brand” like Netflix, on the other hand, can play by different rules. “Would House of Cards or Orange is the New Black have seen the same success on Lifetime on Bravo? Who’s to say?”

Al Kaabi elaborated on when she referred to the work the United Arab Emirates has done to bring production to the country, balancing enormous cultural and religious differences with the need to make serious infrastructure investments.

“One thing TV allows us to do today is be bold, honest, frank and scary,” said Khanna. We can “go to the places that only Walter White can go to, and get into these places in our hearts and minds.”

But the most satisfying thing about such a diversified space is that “it’s not about pleasing everyone anymore. It’s about finding the group that loves what you do and how you tell a story. And that’s why every story has a place.”

Guthrie wrapped by asking Mortimer whether she’s seen roles for women changed as she herself went from actress to creator. But Mortimer swung the conversation back to the vastness of opportunity for all actors in television — which is fertile space for all kinds of creative development.

“I just think there are great roles on TV. That’s why all of our actors want to be on TV these days; even the most successful ones, the ones that can do any movie they’d like. They’re all dying to be on television because that’s where all the great material is, the great writers are, the great parts.”

Mortimer said that on TV, you can  investigate a character through a series in a way that’s more satisfying and more profound than in a film. She also pointed to the “limited series” trend (series that last just one season): “That’s just heaven for an actor, to really be able to explore a character in depth, for ten hours, without having to sign her life away!”

“But are roles really getting better for women?” Guthrie emphasised.

“Everything’s getting better for women, partly because we’ve been able to monitor viewing figures in more detail now,” said Mortimer. “It’s become apparent that the female audience is so important. The money people are mindful of that in the shows they develop. Also, men are starting to realise they’re interested in the things women are interested in. There’s starting to be less shame in admitting to that!”