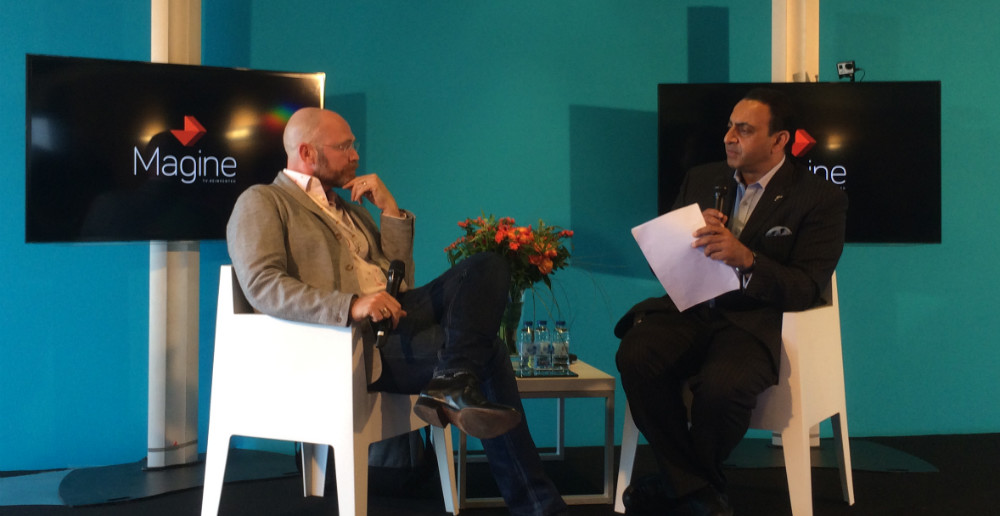 Liveblog: Who will be designing the TV experience of the future?

Will it be viewers or will it be professionals? Magine's seminar explored the possibilities.
By Stuart Dredge on October 10, 2013 0 Comments

One of the trends bubbling away at MIPCOM this year surrounds the growing desire of people to control how, when and where they watch their television, and increasingly to watch videos made by people like themselves – user-generated content and a fresh-faced generation of YouTubers.

TV platform Magine hosted a session this afternoon to explore the trend, and what it means for TV professionals. The session was moderated by journalist Riz Khan, of Al Jazeera English, and formerly CNN and BBC World, and featured Magine CEO Mattias Hjelmstedt and EVP of content Michael Turner, as well as guest speakers from Zig Zag Productions, Shine, Facebook, Sparks Network and Ennovva.

The first speaker was Danny Fenton, CEO of Zig Zag Productions, who talked about the biggest change he’s seen. “The main issue has been consolidation within the production sector, and with consolidation you’ve had bigger competition to compete with. It makes life more difficult for independent producers when you’re up against multinational corporations.”

And he said that his company is now a content provider, rather than a TV producer. “Online there are so many more players who are trying to acquire content,” he said. “Wherever there’s a screen, we want to have our content shown.”

Fenton also pointed to suggestions in the past that the internet would be the death of television. “Most of the content that people are watching online originally derives from television… If anything, the internet has drawn people towards television… I feel that television is still the driving force.”

What will be the next 10 years of changes? “Television and people being loyal to channels… people are not so loyal to channels any more. They’re loyal to programmes. Programes are the things that become appointment to view,” he said.

“I actually think going forwards, viewers will be more loyal to the brand of the producer than they will be of the channel. So what’s liberating is there’s potential for companies like Zig Zag in the future to create channels on YouTube where people will come to our programes, rather than having to sell via a broadcaster.”

Fenton also criticised suggestions that online platforms are going to be all about shortform content, predicting a change over the coming months and years.

“If you look at the latest data, people are now watching more longform online, and I think there will be a movement way from shortform,” he said. “As the likes of Hulu and Yahoo and YouTube are investing in content, then the quality of the content and the duration of the content will increase.”

Zig Zag has just announced two new YouTube channels, where the emphasis will be on longer-form content rather than short clips.

“We see those channels competing with traditional channels,” said Fenton, who is looking forward to a multichannel universe where Zig Zag’s channels sit alongside those of big broadcasters on an array of devices, including smart TVs. “It’s more about marketing your channel and making people aware of it, and I don’t think it’s about the duration of the content,” he said.

Next up was Gary Carter (pictured above), chairman of Shine Northern Europe, who was asked about what he sees as the biggest change in production. “Content is beginning to float free of all traditional delivery platforms,” he said.

Carter talked about the different ways people are watching television, and said it doesn’t impact the way his company is making the content. “The speed of storytelling and the speed of editing is connected to the shortform consumption of content,” he said, pointing to Susan Boyle’s discovery on Britain’s Got Talent as an example: the clip of her audition blew up on YouTube, and that may have influenced the way the show is made since. “The number of cuts got faster by about 10% every series,” said Carter.

What does he think will be the technological drivers that change Shine’s business in the coming decade? “It’s going to be personalised delivery: on-demand delivery of content,” he said. “That subscription video-on-demand is going to change a huge part of my business.”

Carter was also asked about binge-viewing: people watching lots of episodes in a row rather than waiting a week between them.

“If you’re a longform storyteller, when you’re conceiving that series for television, it’s in an arc that will hold their attention across weeks. But if I don’t have to do that, how is that going to change the way you construct the narrative, let alone how you film it in a physical sense,” he said.

“I sense that we’ll see in time some interesting, quite obscure experiments – you’ll have longform narrative over 10 hours of one story, almost like a novel as opposed to a serial in a magazine.”

The next speaker was Nicola Söderlund, CEO of global formats alliance Sparks Network, who talked about how he sees future television viewing changing.

“The nonlinear watching of TV will affect the genres that will be popular. Look at yourself, if you come home from work and you have all the greats, you an choose whatever you want. What would you watch: a gameshow or a good drama series? I would watch a good drama series. So I think these traditional entertainment genres will struggle.”

How about the second-screen and how it affects the way TV shows are shaped? “Second-screen is the buzz, but if we really look into it, has there been something that has really been super-interesting in that field? Not yet I think. Still I think what is a really good story is important.”

However, he admitted second-screen is very strong for live television: sport, debates and talent shows. “There the second-screen experience is very important,” he said, while challenging startups in that space to come up with inventive solutions for other kinds of television genres to prove him wrong. 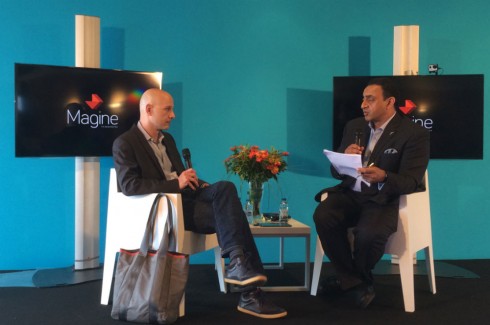 Next up was Andy Mitchell, director of partnerships for Facebook, to give the social network’s view of the changing TV market.

He disagreed with Söderlund about second-screen’s importance, unsurprisingly. “People really are connecting over content, and the second screen is the place people like to come and share their thoughts about what they’re watching,” he said. He added that Breaking Bad’s ratings went up over its five seasons, with social chatter about the quality of the show very important in that.

Might Facebook start to generate content itself and take over? “Not today,” he said. “Where we’re really focused on today is to find ways for Facebook to be an important complement to traditional content… and we want to leverage out platform to help people discover more and different kinds of content.”

Mitchell was asked about Facebook’s biggest challenge, and said it’s “finding broadcasters who want to integrate Facebook into their programmes for us to build products”, citing its recent launch of hashtags as an example. It’s rolling out a trending topics feature to help people discover content too.

What’s coming up that may alter the way people consume content? “Definitely the continued penetration of smartphones,” he said, noting that the high number of smartphones in the pockets of people in developed countries isn’t the whole story. “It’s not that way in the rest of the world. Most of the world is still on feature phones, so as smartphones continue to roll out and gain ubiquity worldwide, the world will continue to evolve.”

The next speaker was Magine CEO Mattias Hjelmstedt, who started with some happy memories of his first gadget (“the ZX Spectrum”) before looking forward to the acceleration of new technologies. “Just looking at the last five years or so, it has been an explosion,” he said. “If we are to look at the world, it’s going faster and faster.”

Hjelmstedt talked about the high expectations that TV viewers have from their devices and apps. Is technology keeping up with those expectations? “Yes and no. In some terms, technology leapfrogs expectations: for example when the first iPhone came out, and when the iPad came out it was the same,”he said.

“But sometimes expectations are far superior to what you can do. It’s technology together with what you’re willing to do with that content, and how far you’re willing to reach with it… I think the consumer expects to be free. I want to see content at the convenience of my time. The thing we have least of today is time… It’s freedom to consume the thing you want at the specific time you want.”

Magine is hoping to reinvent the distribution of television, said Hjelmstedt. “Try to disregard the history: if you created television today, what would it look like?” And he said this comes back to freedom of choice for viewers, whether they’ve switched on the TV and missed the beginning of a show, so want to wind back, or have forgotten to record a show the previous day but still want to watch it.

What will he have in his lap in 10 years time? “I think we’re going to continue going down the path we’re at. I don’t think the big screens are going to go away. We’re going to think more of screens as screens and nothing else, where you’re going to push your content. Things are growing bigger and they’re growing smaller.”

The final two panelists were Michael Turner, EVP of content for Magine, and Carolina Angarita, global CEO of digital agency Ennovva. “We’re probably in the finest era of my lifetime in terms of storytelling in television. It is now trendy to talk about television series,” said Turner. “My children went to see Gravity in a cinema in Barcelona, and there were about nine people there! If you showed the final episode of Breaking Bad in cinemas across Barcelona, they would all be full.”

Turner talked about Magine as “viewer-designed television… that basic human activity of switch on, what’s on? What’s been on that I want to watch? And tell me something I might want to watch. With those three things, you can’t lose.” And he stressed that it’s vital for the industry to be able to count all these viewers, to ensure the business is sustainable.

Angarita also talked about social media in Latin America where Facebook and Twitter are very strong, and may have a role to play in helping to measure ratings. “Social media is driving a very strong force towards television,” she said, before asking Turner when Magine will launch in Latin America (the answer: there’ll be a beta launch this year).

Turner ended with some stats: Magine currently has around 55,000 users in Sweden, where it launched in April, and Turner estimated that it now has rights to show 95% of TV programmes there, compared to very little at launch. The company is hoping to build on this growth into 2014 and beyond.