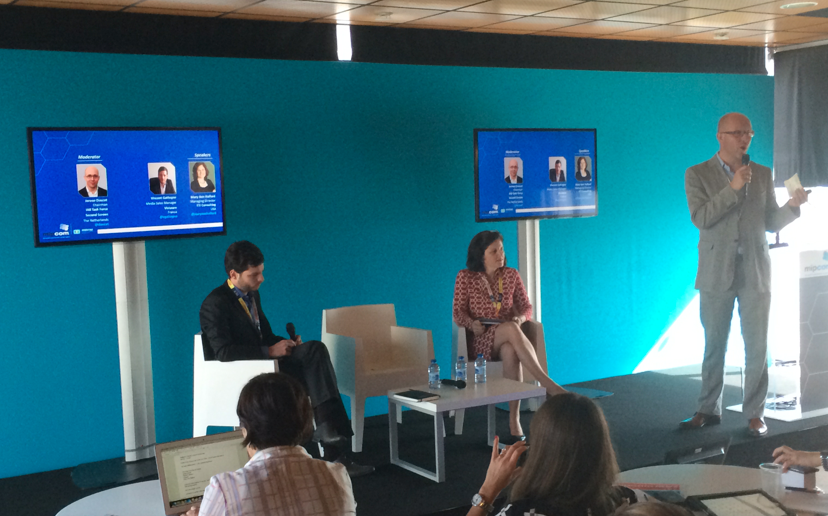 "A tease of interactivity" on social or with automatic-content recognition apps "can help extend the brand experience".
By Angela Natividad on October 10, 2013 0 Comments

How do producers use the second-screen to reinforce and add to their storytelling? Vast Media‘s founder and managing director, Matthias Puschmann, introduced this multi-part workshop with a few second screen best practices.

The MTV Video Music Awards, our first example, are “always very active in providing second-screen engagement opportunities”, Puschmann said. One thing they do (among the many) is curate fan tweets, then post them on TV and on VMA-related digital media alongside star tweets, providing an interactive live experience that also makes viewers feel involved in the festivities.

On Celebrity Big Brother, viewers at home could make choices that influenced events in the house, like which candidates participated in challenges, or what rewards and punishments they received.

X Factor‘s app had play-along features as well as “brand integration of a pizza chain, so there are also sponsored messages, branded games and special promotional codes that people can exchange for cheaper pizza,” said Puschmann.

For ITV2 show #CrazyBeachesTV, viewers can tweet what they think will happen while ad breaks take place. The funniest comments are read live during the show, a “nice second-screen tie with a direct on-air effect,” Puschmann observed.

Finally, our personal favourite, The Weather Channel organised the first-ever tweet-powered tornado to draw more attention to its newsdesk broadcasts. Users could tweet to TWC using a special hashtag; the total volume of tweets received affected wind level inside the studio. The goal: create an on-air tornado to disrupt the broadcast entirely.

WHAT’S NEXT IN SECOND SCREEN?

“Second screen is all about making TV better,” said Ex Machina co-founder Jeroen Elfferich, who introduced the next portion of the session, titled “What’s next in second screen?”

“People aren’t watching TV the same way. They’re watching TV more than ever, but a gigantic 80% — in some markets, even more — are online while watching TV.”

This development is both a threat and an opportunity, Elfferich said. For example, people tend to wander off during TV ad breaks, but now they’re using second screen apps, which means they’re actually more exposed to ads than ever. Seize that opportunity to keep their attention; once a TV ad starts, they’ll start roving around for other forms of entertainment (or just go to the bathroom.)

“When you sit down to look at how you’re actually going to start programming (second-screen interactions), how do you incorporate it into your existing workflows?” began Watchwith’s senior director-customer solutions Doug Clark. “A lot of times it’s very daunting.”

Clark explains Watchwith as “a group of experienced interactive TV people with the back-end system, tools and API” to make second-screen integration smoother. The service lets you create, schedule and measure audience engagement around your TV shows and ads.

Partners include NBC Universal and Broadcasting. Watchwith also hopes to generate enough adoption that it will be able to help standardise data models: “Across the industry we’d like to see standard data models and workflows so (second-screen) can be scalable”, and clear portable  and systems established, Clark said.

Examples of Watchwith ads include Syfy Sync, which has been in the market for over a year and will soon penetrate the UK and France. Syfy Sync “actually listens to audio and brings forward a very rich content experience” — in other words, it uses ACR (automatic content recognition) functionality to recognise what part of the show a user is watching to deliver an interaction directly tied to that moment.

“This has gotten tremendous uptake for the fan base at Syfy; it’s become almost essential,” Clark said. ACR in particular is a big draw: you can easily “take a call to action and (ACR) brings it to the second-screen… it becomes a multi-screen universe of interactive content.”

In sum, “It’s really looking holistically. You have these assets… and you can drive all these experiences.” The key is to standardise an ecosystem where “all of this is easily created and extended,” coupled with a means for easily gathering analytics.

Alex Terpstra of Civolution presented his company next. Civolution is also, and perhaps primarily, ACR-focused: “We make devices that listen to the sounds of television,” he said.

Recent examples include “Predict Kills,” a Walking Dead second-screen app for the UK market, made by Red Bee. The app lets you predict the number of zombie kills in each episode, as well as judge which character was most deadly, among other things. The app syncs to TV live and on demand, tracking whether how your predictions unfold while you’re watching. There’s also a Twitter stream within the app so users can follow what other viewers are saying.

Another feature of this app is the Thrill Meter, which “warns” you before kills occur on-screen, adding an additional ambient layer of experience to live television.

The second example is App the Movie, “the first second-screen experience in cinema in the world,” Terpstra proclaimed. The app provides supplementary information, additional scenes and extra camera angles while you watch the movie. It vibrates whenever there’s something new to watch.

“Once the movie comes out on broadcast TV or DVD, the whole experience will still work” because its functionality is directly triggered by sounds in the film, said Terpstra. “Synchronisation is part of the content itself.”

It is also possible to produce synchronised advertising with the same kinds of “real-time triggers” that will work whenever an ad is being watched.

After Civolution’s presentation, Terpstra rejoined Clark and Elfferich to discuss industry trends, particularly Facebook’s decision to finally “show their love for the TV industry” this week, according to Elfferich.

“From what I see, in our dealings with them, they’re really into it,” said Terpstra. “They’re really making an effort. But they’ll have to launch at scale” — a challenge that’s difficult for any company to take on.

Piling onto that, Clark said, the US is especially complex because of its various time zones, making planning for real-time integration on Facebook and Twitter a logistical nightmare. These logistics take up the most time spent trying to prepare second-screen experiences, he lamented.

But he does credit Facebook and Twitter for their newly-aggressive attitude about facilitating social TV interaction. “What they’ve done well recently is they’ve realised they should be participating more with broadcasters and brands.” He said broadcasters are increasingly seeing them as viable promotional channels.

“Being able to offer a tease of interactivity”, for example with Twitter cards, “can help extend the brand experience,” Clark added.

This half focused mainly on best practices with demonstrable business results.

Since adding a second-screen app in 2012, for example, the show “Wie is Tim?” enjoyed a ratings increase of 17% over 2011. And Volkswagen’s second screen app for the show “Divorce” drove 15,000 visits to its product page, resulting in 150 car sales, according to Doucet.

Watchdog-style show Kassa saw viewers’ average age drop to around 55 from 58 after second-screen integration, which brings up another fact: it isn’t just young people using this technology, although the needs and expectations of older users are much different (as PwC’s Rose pointed out yesterday).

Gattegno pointed to M6’s big investment in second-screen promotions. It’s the first French network to have put in place a channel-wide second-screen strategy: across 30 programmes, 600 shows and 200 million displays.

And of course, the Breaking Bad finale drew in 1.2m tweets and 3m Facebook posts, points out Halford, who also drew conversation back to Twitter and Facebook’s competition to own the social TV space: there’s money to be made, whatever screen you’re on.