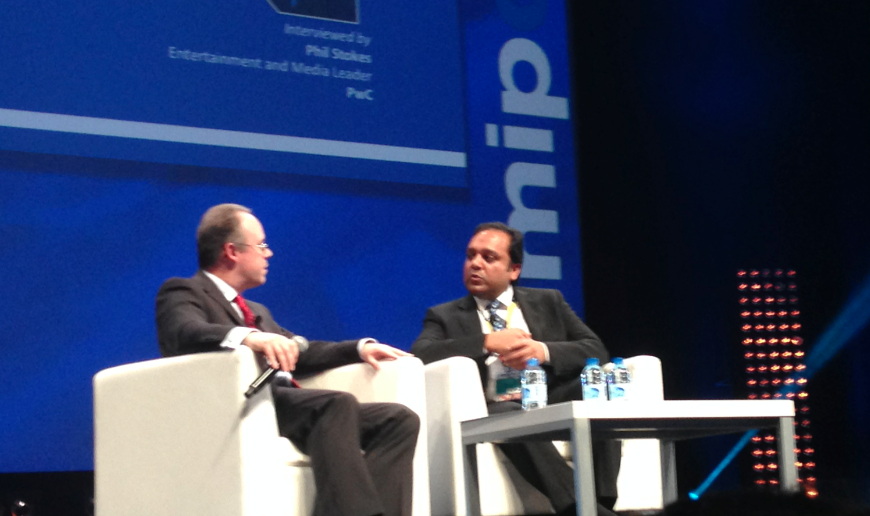 How are CEOs in major media firms responding to shifts in consumer and advertising spend re-shaping the TV industry? This morning, PwC’s entertainment & media leader Phil Stokes (left) shared a panoply of key stats with us, then interviewed Punit Goenka, CEO of Zee Entertainment and Roma Khanna of MGM (report coming soon) to find out how they addressed the issue.

“Consumers are increasingly in control,” Stokes began, who emphasised the importance of “placing the consumer at the heart of the strategy”: finding a way to justify your existence, and producing a relevant customer experience.

For this quick statistical review, PwC divided the entertainment world into four buckets: Mature Markets, Next Waves, Up-and-Comers, and Slow-Growers: 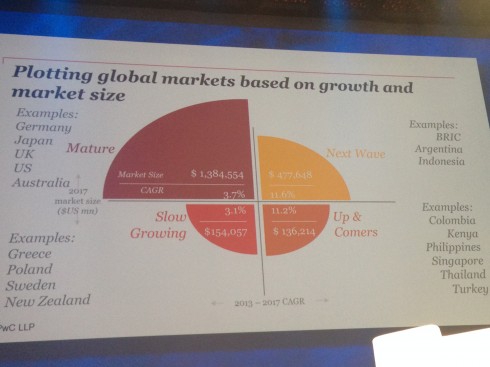 Above you’ll see what they made in revenue per annum. A lot of focus was placed on the important growth of Next Wave and Up-and-Coming countries.

Advertising and consumer spend are the primary drivers changing the industry, so what drives them? The short answer is, easy internet access and mobile devices. Broadband penetration in Mature markets enjoyed 80% growth in 2013 and will likely expand to 85% in 2017. Meanwhile, mobile internet subscriber penetration is at 60%, expected to rise to 83% by 2017.

The Next Wave and Up-and-Coming countries will likely increase mobile internet subscriber penetration to a bit over 50% by 2017.

Internet and video game spending will drive future growth. They’ll also attract more advertising dollars. TV, which has traditionally enjoyed the lion’s share of ad spend, will remain stable in 2017 (34%, unmoving from today’s share); internet advertising will grow from 21% today to 31% in 2017.

“If you put the internet and television together, it will grow from 51% to 58% — which tells me a lot about the potential for growth in second-screen”, Stokes said. By and large though, online TV advertising will remain modest, growing from 2% in 2012 to 4% in 2017.

Stokes wrapped the stats update with a few handy tips:

– Big data is seen as the panacea. But really it’s the little data at the heart of the big data: small insights about individuals.

– To stay relevant, content creators must innovate both in products and ways they deliver them.

“There’s a lot of talk about fragmentation,” Stokes said. But he encouraged us to remember that “consumers are saying ‘I don’t feel fragmented, I just want ubiquity'”.

Some of the fog of digital has lifted, he reassured, which is why PwC has chosen to call this period “The end of the digital beginning”.

Which leads us to our interview portion. The first guest was Goenka of Zee Entertainment, who refers to the Indian market as “the tipping point”.

Zee is also working on standardising a new advertising measurement system across the country. It’s organised partnerships with TV firms and ad agencies to adopt it across the next five years. The new measurement system is “about giving granularity of reach of consumer, giving far more focus to find the right consumer,” said Goenka, referring back to the importance of “little data”.

He talked a little more about digitalisation in India. Zee has a “diversified portfolio” philosophy, in which each product is focused clearly on a consumer segment. “I believe, going forward through digitisation, and the needs of advertisers, further segmentation will happen,” said Goenka. “Fragmentation is the order of the day: you either lead it, or you get fragmented.”

Still, it takes time to build a number of “little data” insights into an actionable mass — even for a company like Zee Entertainment. Over time, said Goenka, “we’ll have far more insight on what the consumer likes and consumes. Going forward it’s only going to be better for us.”

While waiting for big (or “little”?) insights to roll in, Zee continues to innovate. “We have a strong internal team that works on ideation and development of formats and shows. India is known for only imported formats; Zee is the first that developed local formats in India, and now we’re bringing them to the world outside,” Goenka said. To illustrate in live-action, he encouraged attendees to visit Zee’s MIPCOM booth, where it’s created a dance hall… right in the middle of the exhibition floor.

As for growth in overseas markets? Goenka points to the importance of planning for profitability, even while experimenting. “Revenue growth is first, then profitability will come later. At Zee, we’ve always had a simple mantra of ‘growth without profitability is not really growth’. From our perspective, any investment that on a sustained basis doesn’t yield 20-25% return is a bad investment,” he explained.

“Investing in formats isn’t cheap, it costs a lot of money. Returns come in three, four years’ time. So we have to constantly innovate. One has to adapt.”

And competitors are increasingly important to driving innovation. The industry is moving towards more “coop-etition than competition,” Goenka revealed. “We are actually partnering with our key competitors” on various experimental projects.

The biggest challenge for him is talent in India. “That’s the only thing that gives me sleepless nights: it’s not revenue, it’s people,” said Goenka, who explained that India suffers from a dearth of talent it lacks specialised schools that train for this business.

“So we have to recruit fresh talent yearly, put them through rigorous training on the job and on-site. People must be given freedom and the right to decide what they want to do,” cultivating a culture of entrepreneurship that encourages individuals to take ownership over their work, Goenka concluded.