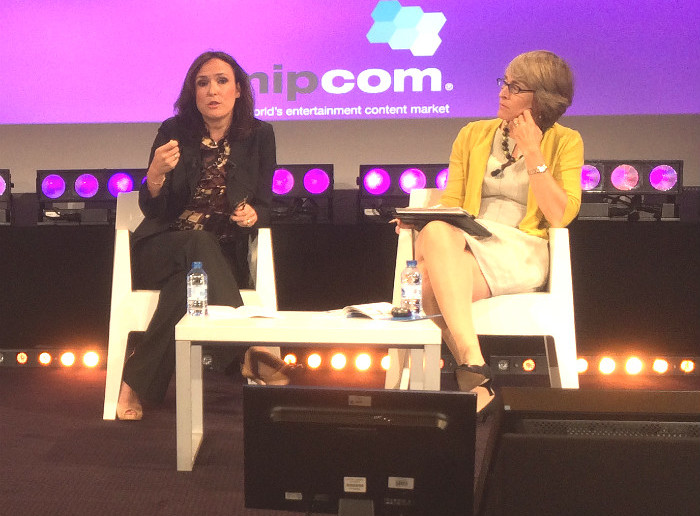 Liveblog: Nielsen on how TV can get ahead of the windows game

Dounia Turrill brings the data on how broadcasters are faring against competition from Netflix and Amazon.
By Stuart Dredge on October 8, 2013 0 Comments

These are interesting times for broadcasters, as they grapple with the competition posed by SVOD services like Netflix and Amazon, and roll out their own TV Everywhere initiatives to serve changing consumer habits.

How well are they doing? Nielsen’s SVP of client insights Dounia Turrill brought her insight into that to MIPCOM this morning, with a talk on “Getting ahead of the windows game“.

“I do tend to think it’s about following the consumer, following the viewer, and making sure this deep understanding of that viewer follows,” she said, noting that over the past decade there’s been a big shift in the ability to control the diffusion of content and information across different devices, from tablets and smartphones to smart TVs.

“Today’s consumer isn’t confined by this linear landscape where they have to watch at the time the programme airs,” she said. “There’s really an increased opportunity to move across devices and across time.”

But this brings issues such as piracy, which she said was a double-edged sword. “On one hand it cannibalises audiences, on the other hand, it gives the opportunity to gain that exposure,” she said. “It might have triggered that social conversation that will bring them to the screen, to the content.”

Turrill provided some stats on changing habits of viewers in the US. Viewers there still spend the majority of their time watching TV. “This idea that TV is a dying phenomenon is really misleading,” she said.

And the average American consumes almost 42 hours of content each week across TV, online and mobile. “These devices, I like to say, expand the day, expand the opportunities, and don’t really contract people’s ability to embrace the content.”

Digital video recorders (DVRs) are now available in 50% of US homes, and video-on-demand is available in 60%. Interestingly, the number of people watching video on the internet decreased slightly in the last year, as their viewing grew on other devices.

Turrill also talked about the changing pattern of viewing, breaking down the viewing of The Following between live, Friday repeat, seven-day DVR and three-day VOD, Hulu and then VOD 4-14 categories to show how the overall audience is bigger than it would have been for an episode of a comparable drama in 2001: 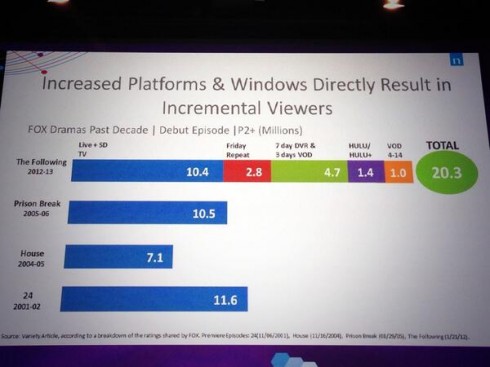 “Audiences are additive, so creating a vast opportunity for content providers and for distributors,” she said. “People do catch up on shows and have these multiple entry points for exposure… Consumers love to be entertained by content wherever you put it.”

Turrill was also asked about Nielsen’s new Twitter TV ratings, which she said will help people understand how viewers connect in to shows. It’s not a problem if they don’t mirror the existing audience ratings, in that sense.

She was asked if Nielsen plans to follow suit with Facebook, now it’s launching hashtags and opening up its data to the TV world. “Certainly as measurement opportunities come up, that’s a space that we really live in, and so certainly if opportunities arise that’s something we will do,” she said, while also saying that Nielsen is open to the idea of bringing its Twitter TV ratings to other countries around the world, if opportunities arise.