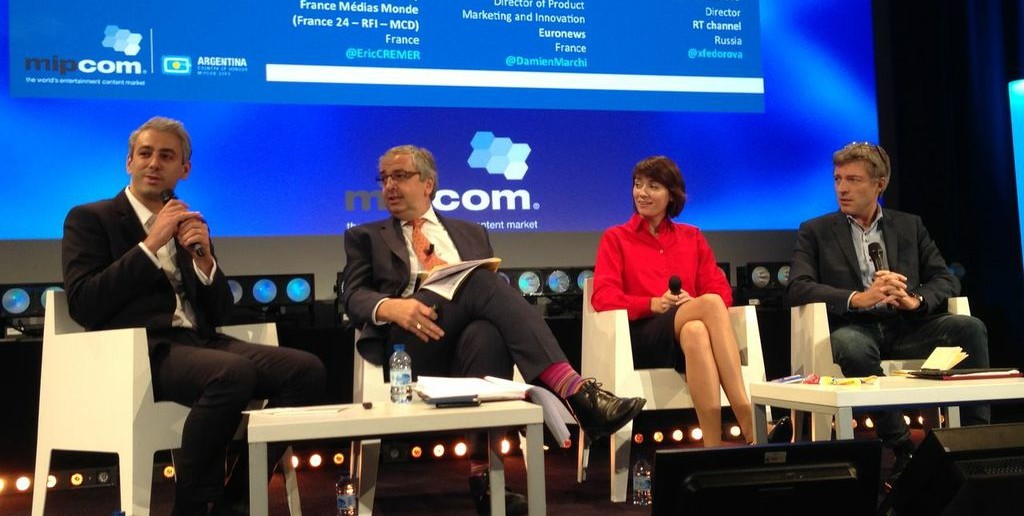 Is it best to be brand-new, an established voice, or the anti-mainstream's bullhorn? RT, Euronews and France24 debate.
By Angela Natividad on October 9, 2013 0 Comments

All three are global news channels: France 24, Cremer joked, is still the “baby” of the family, as it was France Médias Monde’s most recent news network launch. (However, it’s already available in 22 million households worldwide, with Europe representing a good 2/3 of that population.)

Euronews has been established for many years as a distinctly European voice, dominant on broadcast (though journalists now publish simultaneously for digital). Finally, RT positions itself as a global “anti-mainstream” news channel.

“News channels are mandatory,” said Cremer. “All operators have to have a news offer in their lineup. But they’re considered complementary, so it’s still hard work to convince them to take France24 if they have something else.”

Perhaps because their brands have been around a bit longer, Marchi and Federova had a more bullish view. “There’s a huge appetite for the particularity of European news,” said Marchi, which means there remain “a lot of opportunities in traditional broadcast” for their particular brand.

Federova pulled no punches. “Unlike my colleague from Euronews, we supply different content to different audiences.” For example, RT Television’s English language channel is global, but LatAm receives Spanish-only content. Online, “RT is No. 1 as a news channel… we position ourselves as an alternative sources of news.”

This position, which she called “anti-mainstream, “helps us to distribute on cable and other platforms as well.”

Stanswick then asked Marchi whether it’s difficult, as a European news offering, to compete with Anglo giants like CNN and BBC.

“They’re definitely a bigger brand, but in terms of regional audiences we’re 4 times bigger,” he said, pointing out that Euronews is watched by 8m people in Europe, while a paltry 2m watch CNN.

“The crucial thing is how to differentiate,” he said, as any given news channel is now competing with 250 others in the world. “We have a European point of view of international news, but we’re not the Voice of the State. That makes a difference.”

He also emphasised an enormous network of correspondents: “Our 400 journalists represent from 30 nationalities, they have contacts, we can be (on the ground where news is happening).”

Finally, Euronews’s content models are relentlessly improved-upon. Just yesterday they launched new on-air graphics for news, and he added, with a knowing nod toward Federova, that “we look up to RT on YouTube and are trying to compete.” Other recent efforts include an experiment with Google Glass, co-creation of mobile apps with clients, and a partnership with BlackBerry.

“It’s thinking about how people interact with news content. Everything is under review,” he said.

Stanswick asked whether Euronews is satisfied with BlackBerry in general, given that recent company news hasn’t been stellar.

“We place news content at the heart, and that interface is fantastic,” said Marchi. “We’re very happy to have it. The rest … well, we’ll see what they make of their business.”

Next, Stanswick asked Federova how RT’s recently-launched Free Video service is faring. Free Video is a portal where media professionals can download footage created by RT.  “The idea is to share our footage with the rest of the world” while promoting RT’s brand (all content features the logo), explained Federova.

“Later it became very popular so we decided to launch a news agency —Ruptly, based in Berlin.” Ruptly is positioned as a “revolutionary video news agency” that provides “stories not covered before”.

“Footage will be supplied online so you don’t have to pay satellite fees,” said Federova, adding that different sizes for different formats are also easily accessible.

Stanswick asked whether she feels RT is encroaching on a space already occupied by AP and Reuters.

“I think we’re not competing, we’re taking a niche” they aren’t filling, she said. “It’s time to supply people with real stories. I’m not saying they’re doing a bad job, but they’re not doing a good job. And they’re so old and huge. We’re young and fast.”

On Ruptly, “you’ll get traditional pictures that you’d get for AP and Reuters, but you also get other stories from elsewhere in the world.”

She took the opportunity to re-emphasise RT’s alternative positioning: “There is a huge demand for anti-mainstream content. Look at Occupy Wall Street: We were the first to cover that… people turned to RT in America to see what was happening in the US that wasn’t being broadcast on their channels.”

After that Cremer discussed France 24’s ambitions to expand the types of investigative content it produces. “It’s not just about breaking news,” he emphasised.

Revisited, for example, is a news programme where journalists discuss their experiences in war-torn cities. They return two years later to see how the lives of the citizens they met have changed.

France 24’s also organised a “bus tour report” where three journalists travel around a given country to provide an in-depth review of it. It’s also producing a daily show about Africa, and AsiaLive, which hosts reports from journalists based in strategic Asian capitals. Finally, The Observer of the World covers news from citizen journalists.

“Innovation is key,” said Cremer, who added that France 24’s approach is about “being on the right network at the right time, in depth.”

Stanswick asked then what the entertainment industry can teach news broadcasters.

Marchi’s insight on this point was unique, since he is from entertainment and has been working in news, specifically, for just the last nine months.

“The big difference is the lifecycle of what you have to deal with,” he said. “News expires after a few hours — 72 if you’re lucky, or a week if the content has been very viral.” On the other hand, “X Factor has been around for 10 years, and The Price is Right for 60 years. The lifecycle, the engagement that you’re driving around the content, is completely different.”

Naturally, the way you build and monetise around those lifecycles must also be different.