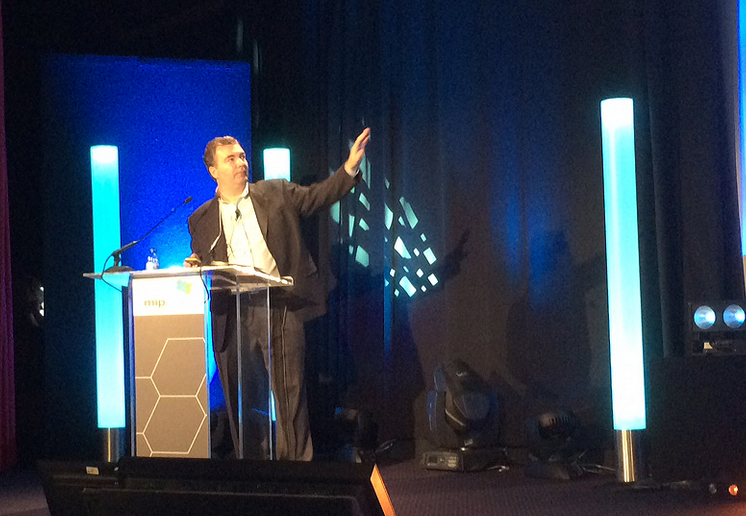 Author on the disruptive forces changing the way TV is distributed and consumed in 2013 and beyond.
By Stuart Dredge on October 7, 2013 0 Comments

Author Jeff Ulin knows a thing or two about the challenges and opportunities of the digital world for television. He’s the author of an influential book called “The Business of Media Distribution – Monetising Film, TV and Video Content in an Online World”.

Today, he appeared at MIPCOM to explore the themes in his book, and how the television world can respond to digital disruption. Ulin’s career includes 10 years at Lucasfilm heading worldwide distribution, as well as work with Paramount and Universal, and animation studio Wild Brain. He was introduced by Gary Marenzi, president of Marenzi & Associates.

Ulin started with a discussion about the changing window patterns in the TV business, which he said were in flux, with pressure to accelerate all windows, and complications provided by the change in access points: tablets, mobile phones, laptops and computers. “Now you have an explosion of places you can get content,” said Ulin.

He added that the key challenge today is that there’s a culture clash between the “post-Napster generation, when people want their content whenever they want it, wherever they want it”, which is antithetical to the notion of windows. “It’s almost a populist notion saying ‘I should have it now, and I should have it for free‘,” he said.

So there may be the best content in this golden age, but it’s “harder than ever to monetise it” according to Ulin, who suggested we’re moving towards a trend of “persistent VOD“: infinite shelf life AND infinite shelf space. “If you combine the long tail and the wide tail, you have all content available all the time,” he said. “That collapses windows, and it destroys the monetisation of the ecosystem.”

Ulin’s theory: pay TV and free TV are both in danger. Pay TV is in danger because “In the generation of people who are cord-cutting and using apps, and that consumer creed of I’m not going to wait, there’s a bit of window blackmail: ‘If you’re not going to give it to me, I’m going to find a way to get it anyway’,” he said, citing Game of Thrones as the prime example: one of the most heavily pirated TV shows in 2013.

Ulin added that if pay TV’s appeal is as an aggregator of content, if VOD has the same content, the value of a pay TV service comes into question. So original programming may be the key, with Netflix, Amazon, Hulu and others all commissioning and producing shows. “I’m not surprised: I predicted years ago that it would happen. I’m surprised it didn’t happen sooner.”

Pay TV services face three great challenges: direct competitors from digital and online aggregators; and because they’re trying to buy up programming, there’s competition for those rights; and thirdly, this drives up the price of content. “So it’s harder for everybody in this new system than ever before, and that is not going to go away,” he said.

Ulin talked about a “current irrational moment”, where there’s a big landgrab that’s driving up the prices of content. “It’s reported that Netflix has over $5bn of streaming liabilities,” he said. “That won’t be able to go on forever, ultimately prices will have to come down, and a new equilibrium will be reached.”

He also talked about the impact of binge viewing on Netflix, when people can watch entire series of TV shows at once, for example House of Cards. Ulin cited one side-effect: “There are no ratings. No one really knows how it did,” he said, pointing to social media buzz around House of Cards, which spiked in the first week, then declined.

How about free TV? “If something debuts online, is that television? If it debuts on Hulu, is that television? In the future, I think TV is going to be synonymous with premium content,” said Ulin. “But the biggest problem that free TV faces is that we’re now in a video-on-demand world. Television is schedule-based: you’ll historically have daytime, and news, and primetime and late night. All goes away in a video-on-demand world.” And that’s a problem for free TV providers: how do they promote new shows, and ensure people are discovering content that they’d like.

“Discovery is another word or euphemism for risk. It’s riskier because you can’t control the ecosystem. You can’t push people to shows,” he said, before warning that these changes challenge traditional advertising metrics as viewing gets fragmented, and also syndication, with players embedded everywhere.

Ulin also talked about some of the legal issues around new technology, like Dish’s AutoHop feature that lets people automatically skip ads in recorded shows – something it’s being sued for by CBS, Fox and NBC. Yet YouTube has actively rolled out skippable ads as part of its service, reasoning that if people can skip ads, when they don’t, their eyeballs are much more valuable.

He also talked about Aereo and FilmOn X, the services that retransmit broadcast TV signals, and are being sued by Fox, which even threatened to take its network off the air and switch to a subscription model if these startups were allowed to continue. Also set-top boxes from companies like Roku and Boxee, or Google with its Chromecast gadget, which turns smartphones into the remote controls to stream content to a TV.

And in summary: “Content will remain king, and it is a golden age of television in terms of the quality bar that’s there and the great range of content,” he said. “But the kingdom, because of these influences, is not going to be as rich.”

Ulin was asked about the potential future role of Apple, which has hundreds of millions of devices in people’s hands (and tens of millions of Apple TV set-top boxes connected to TVs), an efficient app store distribution system for content, and growing TV ambitions through partnerships on those platforms.

“There’s a lot of people talking about Apple and Google and those companies are either looking to be the next or help someone be the next virtual MSO: a cable system that’s not delivered through cable,” he said. “I think Apple because of iTunes is obviously in a position to help do that, but I also read stories saying they’re going to work with some of the studios in order to knock off some of the rivals like Google.”