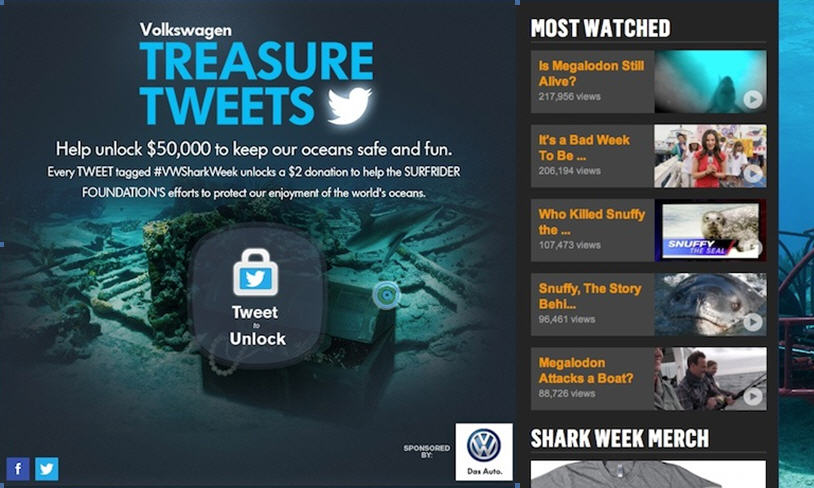 Volkswagen and Discovery Channel teamed up again for the themed Shark Week last month. The partnership consisted of VW building a unique shark cage, called the Volkswagen Beetle Convertible Shark Cruiser, to glide around underwater and take pictures of sharks. To create awareness of marine life, Volkswagen also committed to donate $2 to the Surfrider foundation each time the hashtag #VWSharkWeek was tweeted. The campaign is called “Treasure Tweets”. Surfrider is a charity devoted to marine life.

Users were pointed to the campaign when looking at the 360-degree panorama photos of the “Subaquatic Roadt Trip” Volkswagen created. Here, users needed to find a treasure chest hidden in one of the pictures. It redirected the users to the dedicated website where the campaign was explained. 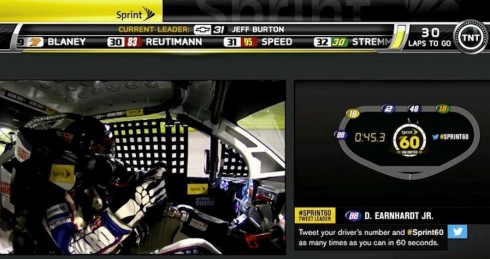 Sprint launched a social race during the Coke Zero 400 NASCAR race in early July. Fans were asked to tweet their favorite driver’s number in combination with the hashtag #Sprint60 as often as possible in the last 30 laps of the original race.

The more tweets a driver received, the faster his virtual car drove in the social race. The driver with the most mentions received $10,000 which were donated to a charity selected by the winner.

The social race ‘Sprint 60 Unlimited’ was set up in cooperation with never.no. It was aired during a 60-second advertisement segment in the final moments of the original race in a split-screen mode. The race was promoted on-air in short commercials to drive more attention.

For the second season of The Newsroom, HBO launched a Vine-based social initiative titled ‘Vine the Line’. Fans were asked to use the video app to create short clips with a reenactment of their favorite quotes from the series.

Afterwards, the clips needed be shared with the hashtag #VineTheLine. HBO released a social video wall (powered by Mass Relevance) on its social TV platform HBO Connect featuring these fan videos. Selected fans could win a signed script from Aaron Sorkin, the creator of “The Newsroom”.