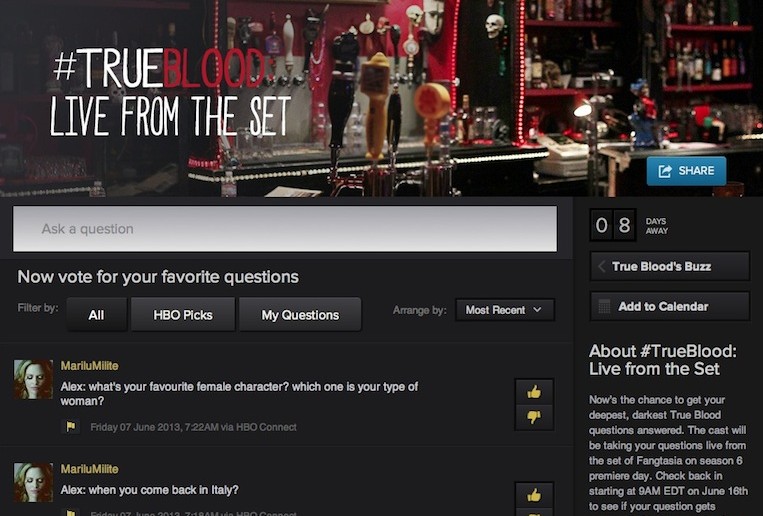 To get fans excited about the new season of True Blood, which premiered on June 16, HBO launched a #SecretsFromTheSet promotion campaign. This two-part social media event included an interactive pre-show right before the premiere and the release of details of the upcoming season via Facebook, Twitter, Instagram and Vine on the morning of the premiere. Additionally, fans had the chance to submit questions live to 13 of the True Blood actors on the Social TV platform HBO Connect. Fans could either submit their own question or ‘like’ questions of other True Blood fans.

Some of these questions were answered during a 15-minute interactive pre-show called #TrueBlood: Live from Set. The pre-show took off right before the broadcast of the first episode of season 6 on HBO. The event was hosted by comedian Retta (who plays the character Donna Meagle in the NBC series Parks and Recreations). Fans who engaged the most through social media were featured in the show’s broadcast – executed by Twitter and powered by Mass Relevance. Fans watching the pre-show were also given an inside look at the True Blood sets.

Archived Q&A with #TrueBlood: Live from the Set here 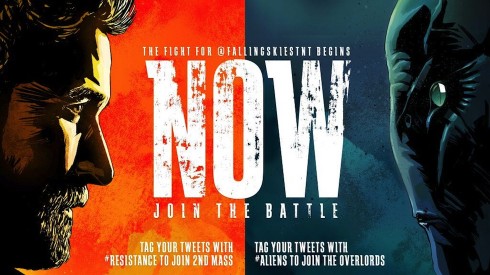 TNT’s sci-fi drama Falling Skies returned in early June. For the season premiere, the broadcaster launched a Twitter-based Battle for the Handle viral campaign on various social networks. Fans were asked to choose a side by tweeting one of the two hashtags #Resistance or #Aliens to join the humans’ fight or the aliens’ team.

In real-time, selected fans who were engaging with the #FallingSkies show during the premiere received graphic novel style digital artwork containing their username and sometimes even a visual representation of their profile picture. After the broadcast, the Falling Skies Twitter page was re-skinned, featuring the side with the most tweets. Additionally, a video depicting the battle showing the same graphic novel visuals featuring the most active fans was posted. The campaign was promoted on-air during the season premiere and on various public places. 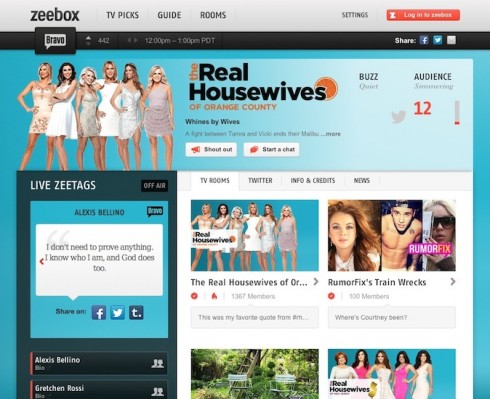 The stars of the reality series The Real Housewives of Orange County interacted with fans through the Bravo Media TV Room on Zeebox during the airing of the 100th episode on June 24. Zeebox introduced the new ‘TV room’ feature to its second-screen app earlier that month. Bravo is one of the first broadcasters to actively promote this new social feature.

TV Rooms are created for fans to discuss certain shows, specific characters or other TV-related topics. TV enthusiasts can create their own virtual rooms to exchange views on TV shows. During the two-hour special of The Real Housewives of Orange County, fans could communicate with the protagonists Jo de la Rosa, Gretchen Rossi and Tamra Barney as well as Bravo executive and host Andy Cohen, through the Bravo Media TV Room.