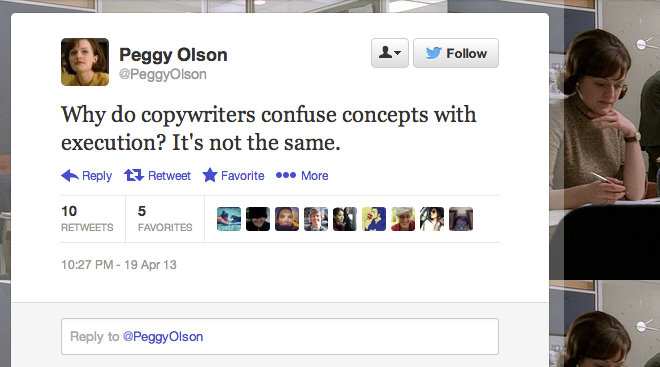 The ”Age of Social” that most of us are experiencing right now, through Facebooks and Twitters and LinkedIns and Quoras, brings a lot of new possibilities to the world of television. But also a bunch of hitherto not-so-often-faced challenges.

For content creators and producers, one of these challenges is one that was addressed during a session I moderated at the Nordic Game conference a week ago. The session was named ”Fan Fiction: Free marketing or IP anarchy?” and addressed the increasingly common issue of fans electing to create content of their own, linked to whatever you have created.

One of the members of my discussion panel was Carri Bugbee, a social media marketing exec from Portland, Oregon. Her trackrecord includes being one of the very first to explore the power of Twitter by creating the — unofficial — @peggyolson persona to intersync with the narratives of the hit series Mad Men. She’s experienced the good sides – an overwhelming positive response from show fans and other co-creators – and the bad side – getting shut down by Twitter within a couple of days (yet later reinstated). I asked her how important will co-creating fans be for television in the future. Her reply merits a massive quote!

I feel like collaboration with fans is the ultimate form of social TV. Web 2.0 brought about social media, which allows web users to interact with other people and content. Merging social media with TV (and film) means fans will (or should) be able to interact with and sometimes even influence outcomes for TV and movie content. That could be as basic as sharing favorite movie lines with friends on their social networks or as complicated as influencing the direction of a character or story arc online.

In many cases it won’t be fan fiction because the majority of people on the web don’t have the impetus to create something elaborate. Most just want to pop in, make a comment and be done. But there are still plenty of people who will want to create something bigger and I think those numbers will only continue to rise. After all, we have an entire generation of teens and young adults who grew up with the power to create videos, sophisticated graphics and games at their fingertips — in many cases, in their pockets. Naturally, they will use their favorite characters, scenes and story locations as jumping off points for stories.

Plus, creating fan fiction is becoming easier and more fun with new, specialized tools and platforms. SocialSamba has a great storytelling platform that not only provides simple ways to incorporate digital assets into a story, but also makes it possible to find people who like the same types of stories or genres such as Harry Potter or vampire narratives. There’s a new tool launching late this summer called Plotagon that fan fiction creators will also love. Fans will be able to make characters move and talk on screen just by typing a script.

All that said, most people who work in the burgeoning social TV industry right now aren’t thinking that much about fan fiction. The industry focus is primarily on building second-screen experiences for mobile devices.

One example comes from Welcome to Sanditon, a continuation of the Lizzie Bennet Diaries, which in turn was an adaptation of Pride and Prejudice that was released earlier this year. In Welcome to Sanditon, the users make up a large portion of the content. But there is a clear 90%-10% relation, according to the creators – 90% of the viewers, be they however young and tech-savvy, still want a good linear narrative more than anything else, while 10% want to jump in an co-create. But with this number set to rise as interaction and co-creation finds new forms to better integrate with the linear narrative, how then do we as creators and producers act to foster positive co-creation and avoid detracting and negative fan interactions? Bugbee sees simplicity as the core:

The best way to foster co-creation is to make it easy. Give your fans cool tools and digital assets they can mash up, promote those opportunities so fans know about them, and reward fans for their efforts. That could include a contest for the best content or character ideas or creating a community where people can meet like-minded fans, share ideas and work together.

There is an understandable reluctancy amongst IP owners and content creators to hand over part of the control over IPs to the eager hands of engaged fans. On the other hand, providing reasons to share, mash-up and co-create and giving the audience the adequate tools to do so, can only help IP owners to steer possible fan fiction in the desired direction. Also, an active audience tends to behave better if they know they are being observed by the original creators. So an acknowledgment of the audience’s interaction is a given. One final question – are there any definite no-nos when it comes to audience interaction and fan fiction? Says Bugbee:

The biggest mistake is to approach this stuff from an old-school marketing or production mentality where you would budget time and resources to support it for a finite amount of time and then just shut it down when that time is up. You can’t approach social media—whether that’s fan-fiction or any other activity—the way we did business before.

Time-shifted and binge viewing has dramatically changed when people consume content. Streaming and VOD (video on demand) have changed how people consume content. That means, if you want to build an avid fan base, you need to support fans with engagement opportunities over shorter and longer product cycles than we’ve been used to. If someone wants to do everything you’ve laid out in one day, they should be able to. If they want to do it two years after your programme’s initially aired, they should be able to do that too.

If you want to build a community, that’s a 24/7 endeavour. For example, you can’t assign community managers or customer support personnel to work nine-to-five, Monday through Fridays if people are most active at 10pm on Saturday nights and might need help at that time.

Of course, the ideal approach is to build something self-sustaining so members of the community can help each other, but that takes time and requires critical mass. The point is, you can’t just drop the ball and leave people hanging when fans expect to interact with your content. The world has changed. Fans and customers expect to interact with and discuss content on their own schedules.

So, there you have it. Now, only thing that remains to do is to boldly go forth and create!