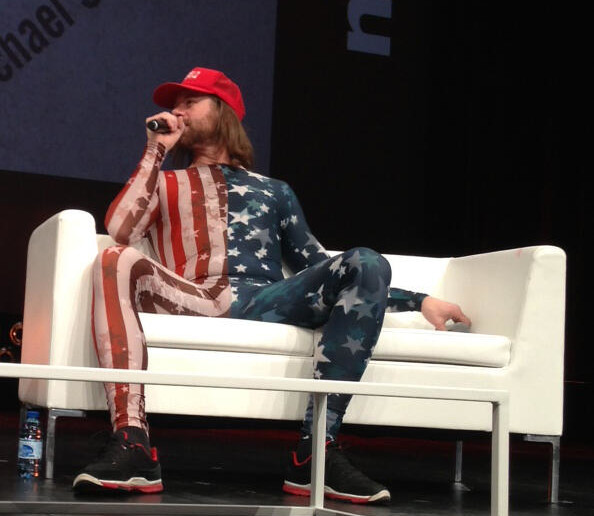 Some of YouTube's biggest content partners showed their work in the Palais today. Check it out!
By Angela Natividad on April 8, 2013 0 Comments

Vsauce founder Michael Stevens hosted this super-fast session, featuring a handful of YouTube’s top content partners. Here’s an equally-fast walkthrough of a few of them, coupled with a cool video from each channel:

Vsauce, by the way, is an American channel that celebrates “mind-blowing facts and the best of the internet”.

First up was the inimitable DJ BBQ, Jamie Oliver’s right-hand man on Food Tube, presented the megastar chef’s channel (which you have to head over here and subscribe to watch)…

Next was the turn of Studio Bagel, a French channel à la Funny or Die.

Then came Flow, the “number one destination for urban sports video content.” Founder Tim Schieff hit the stage doing backflips, finishing with a handstand on the arm of his speaker chair. If that fills you with bitter envy, here’s his handstand tutorial.

Next up was Ponk, a German channel that founder Philip Laude calls “a dream that came true.” Three years ago, at McDonalds in Cannes, he discovered Ponk had become a YouTube content partner. “Now we’re producing some of the best videos in Germany,” he boasted, adding, “All we learned about content creation we learned from community feedback.”

Then came Golden Mustache, a wacky French channel that takes video games, media and other pop culture goodies, then gives them a twist. They launched just four months ago, and they’re starting a show with French network W9 next week, said general manager Adrien Labastire. They hope to build a 360° comedy network that spans all their interests, including articles, photos, apps, a video game, startup comedy, publishing, and branded content. Ambition knows no bounds.

Stevens wrapped by calling YouTube an “immediate two-way exchange,” with “room for stories that traditional media isn’t currently covering.” He – and we – hope to see you there!