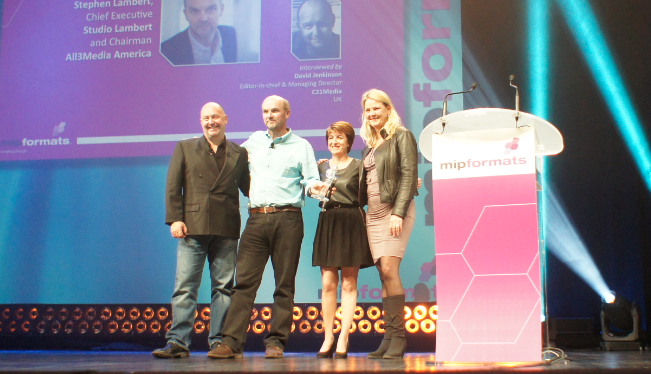 Liveblog: Stephen Lambert: “my next project will launch on social media long before TV”

Lambert wanted to do TV after university, but didn’t know how to break in. So he got a PhD grant for politics and decided to write about the politics of TV. The choice was wise: someone running the British Film Institution commissioned him to write a book about Channel 4. As the result of it, he got a job working for the BBC secretariat, moving on to the Documentaries department in three months, where he stayed for 16 years.

From there Lambert became an executive. “People could pitch an idea to me and I could commission it in the room. I don’t think that exists anymore in the BBC.” In 1998, he became the first Director of Programs for RDF.

One of his most popular formats was “Faking It“, a great opportunity to explore many different worlds… until “we eventually ran out of the worlds,” he said with a laugh. The show was good, but his first real hit-maker was “Wife Swap”. Channel 4 picked it up, and an American broadcast network followed. He’s also responsible for “Secret Millionnaire” and “Undercover Boss”.

Today he runs his own production studio and chairs All3Media, helping usher British formats into the United States. It’s not a simple job. The biggest buyers for formats in the US are broadcast networks, Lambert said; the issue is, British formats tend to be character-driven. “It’s hard to find equivalent American talent to British talent.”

On the other hand, he pointed to Americans producing more original content than ever before, both scripted and unscripted, and often blended.

“It’s good news for producers and bad news too,” he said. “It’s bad news because you have to work harder to get noticed.”

The trick is thinking about an idea’s beginning, middle and end. Will people be in a different place at the end?

“And how do you show consistency?” Lambert went on. Formats are powerful because they’re simple to plug in and replicate, but every episode can’t be identical. “Finding something that isn’t always identical but that sticks in the constraints of the format is really hard.”

He’s come up with a general model that’s simple enough but tough to follow. “We put people in a situation that challenges their values. They learn from it and react to it. That can be comedic or dramatic.”

He also concedes to being lucky with his partnerships and team. “It’s often hard to know when an idea is right. But I’ve been lucky in that for many of my shows, I found a buyer who’d let me take a risk in making a first episode without spending enormous amounts of time going into too much detail.

“One of the things that kills ideas is they get overdeveloped on paper before they can be made,” Lambert said, dubbing overbaked ideas “camels”.

“I think there’s lots of camels on TV.”

Overscripting isn’t the key; good people are. Without an experienced team that already knows how to make good television, “you won’t execute well the first time. Or the hundredth time.”

Winding down, Lambert expressed his excitement about “Gogglebox”, his latest offering for Channel 4. “I said ‘What a stupid idea’,” he divulged. “A lot of people on Twitter thought it was going to be the end of Western civilisation. It turned out to be brilliant.”

“Gogglebox” is a reality series where ordinary people watch shows from the past week and review them from their own couches, like at-home Eberts. It “hangs entirely on finding a cast of characters that’s a cross-section of Britain,” explained Lambert. “It’s very funny.”

Lambert was radiant: “How wonderful that we can feel in touch with our audience!” he exclaimed. “In the old days we’d get a few cranky letters … now we have this direct relationship, second-by-second feedback!”

Jenkinson raised the belief that people who Tweet tend to be negative. “If people don’t like a show and they tell you on Twitter, that’s important,” said Lambert flatly. “But we’ve also had shows where people are very positive. The Twitter audience doesn’t represent [everyone], but British broadcasters are more interested in younger audiences anyway.”

He also observed how marketing’s changed as the result of social media. Using tools like YouTube to promote shows are more important than ever. His next project, he revealed, will “be launched on social media long before it appears on TV.”

Marketers must also be more mindful of timing. There’s no longer this attitude that “the big marketing push should be new shows in their first series. Now they push them out, and if the audience finds them, they’ll market hard in the second series.”

Jenkinson wrapped audience Q&A with a last question: what format do you wish you’d made? “American Idol,” Lambert quipped.