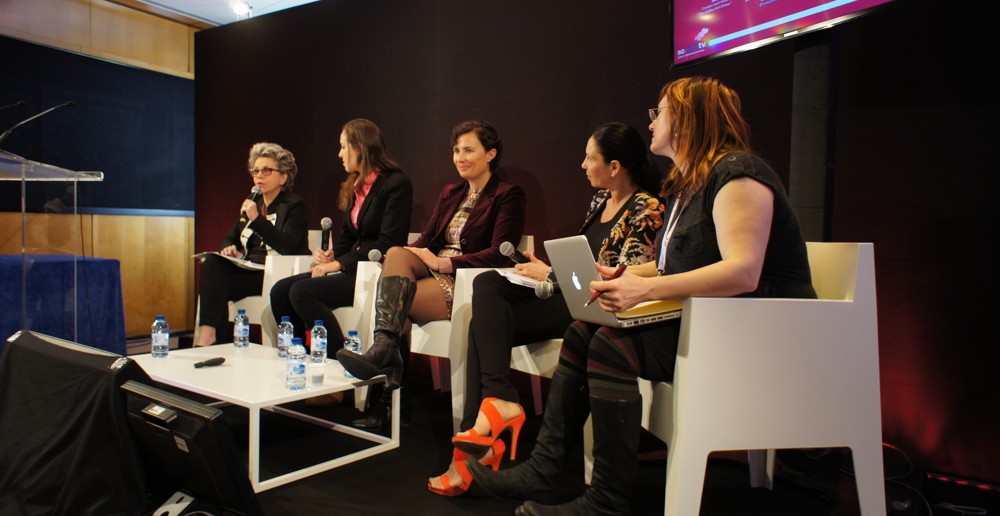 Liveblog: Improving the lot of women in tech & media

Powerful women from different industries join forces to discuss issues we face in a man-operated world.
By Angela Natividad on April 10, 2013 0 Comments

Few things are more conducive to change than a diversity of viewpoints with the same focus. That’s what we got in this morning’s “Women in Tech & Media” breakfast.

Françoise Laborde shared some figures with us, gleaned by the CSA in France:

– 50% of young French girls are post-graduates, versus 37% of young boys

– Women represent 50% of the French population, but only 35% of people represented on TV are women; it’s hard for women to get lead roles.

Where does sexism begin? Early on with the sexualising of little girls, Laborde says. Degrading depictions of women in music videos, reality TV and in advertising are not helpful either.

According to Kim Moses, 80% of what’s happening in digital is still driven by men. “This is a problem because women are the consumers of the content and the ones who spend all the money,” she said. “If we’re gonna be the amplifiers and the routers, we should also be the producers.”

Jesse Draper also weighed in: “I speak for Generation Y. We’re trying to look up to all of you guys and figure out, how do we have it all? How do you do this?”

Stéphanie Hospital strongly believes that CEOs must sponsor and champion women to get them to step up. “We must also encourage young women to be daring,” she said.

Laborde remarked, “I think in France it’s getting worse. Maybe it’s because we’re a country of chauvinistic males. I can’t stand to live in a country where 50% of the French are women, and we don’t have our part in ruling the country.” Equal representation of women in leadership and government roles are integral to ruling a democracy composed of 50% women, she argued.

She also pointed to how insidious sexism could be. “It’s obvious that there are less guys and more girls” in the field of journalism, she said. “But at the same time, the job of being a reporter is getting less prestigious and the guys are becoming part of the hierarchy of publishing. There are not enough women in the hierarchy, and it’s getting worse.” She said that this trend — of women dominating a field and the field being downgraded socially — happens all too often.

Asta Wellejus joked, “I’m from a company of chauvinistic women.” Women are plentiful in production… until you see who receives the financing. “From a production point of view, I need mixed teams,” she said.

The women then discussed what could be done to improve our lot. Hospital pointed out that 14% of employment created this year was in digital, meaning that women need to focus on taking and creating more jobs there. “It’s an economic issue,” she said.

“At Orange we have a CEO who’s decided that 35% of executives should be women. If you want this to work, top management needs to be convinced that there’s room,” Hospital added.

Wellejus said, “I have so many young female followers and they don’t know how to take the next step. They think you have to know how to do it to do it, but you need to learn by doing. It’s about courage!” She went on to say that women by nature are more courageous and, among female digital producers, she sees stronger team protection and high loyalty.

Talent development is also important, she added, and Hospital agreed. “The McKinsey Report finds that when you have over 3 women on a committee, efficiency improves.”

Alongside the CSA, Laborde hopes to block degrading music videos before 10pm, and to expand the CSA’s governmental power to manage the image of women in the media.

For her part, Moses believes woman-focused networking is powerful. “Start your own networking group of women that you admire and that could be helpful to you and other women,” she urged.

Draper brought up Sheryl Sandberg, whose latest book, Lean In, has generated valuable discussion and damning critique about what it means to be a working woman with ambitions. Draper believes that the press can be one of the most powerful forces for changing perspective.

“In the UK, I heard Sandberg’s book reviews were just terrible,” she said. “I’m reading the book and I love it.” One example that comes from the book is of Marissa Mayer, who took over Yahoo right before she gave birth. “She’s judged for every decision she makes… everyone is attacking her,” Draper went on.

“I think the press needs to be a little more encouraging … instead of tearing them to pieces. I don’t know why they tear the smart girls down.

In July, Moses hopes to launch Click, a group that encourages young girls to pursue careers in STEM fields. (These fields typically lose the interest of girls when they hit the ages of 9-14.)

“Women are able to hit a certain level and they hit this glass ceiling,” Moses reflected. Turning to Draper, she said, “I think by the time your generation gets to the point where you hit that glass ceiling, I hope that ceiling will be shattered, because you probably don’t feel it yet.”

Wellejus finished the session by talking about a 22-year-old robotics designer. The young woman created a programmable 3D-printable doll that you can programme yourself. “The two female inventors only did this to teach young girls to code,” she marveled, suggesting there’s hope ahead.

Wellejus then faced the crowd and told the women to keep their spirits up. “For the guys out there: behind every great women is a supporting man. We take more shit, so we need you.”