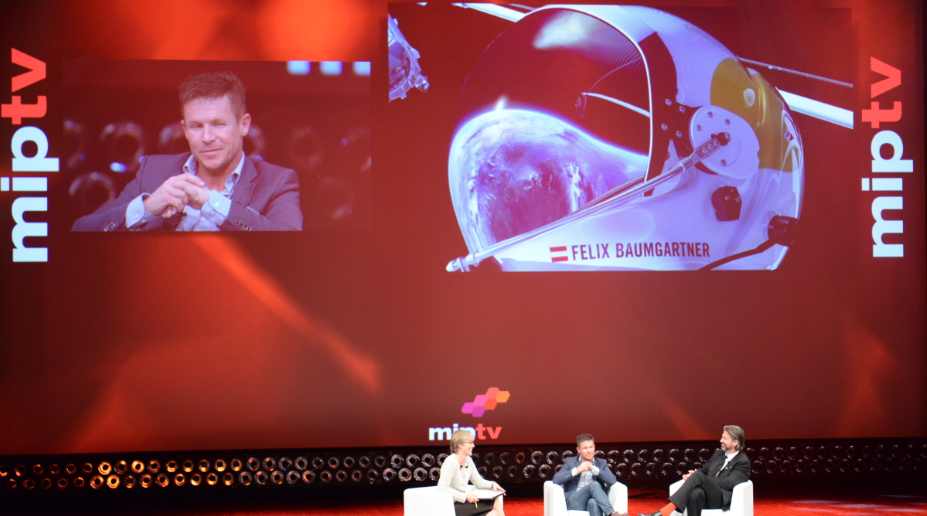 The aerial expert joins Red Bull Media House's Alexander Koppel for keynote on his "mission to the edge of space".
By Stuart Dredge on April 9, 2013 0 Comments

More than eight million people watched live on YouTube last October as Felix Baumgartner skydived from a 24 mile-high platform – a record-breaking feat that made headlines around the world, and brought plenty of publicity for Red Bull thanks to the brand’s involvement.

Baumgartner appeared on the thankfully-lower Grand Auditorium stage at MIPTV today alongside Alexander Koppel, CCO of Red Bull Media House, to talk about the experience, and its implications for the television industry. They were interviewed by industry commentator Kate Bulkley, but Koppel kicked things off.

“Our goal is still the same as it was for anybody in the media industry: it is to win the true and full attention of the audience,” he said.

“But how can you reach the audience? You can buy attention from advertising, of course you can hope to get attention through PR. You can even risk to annoy people if you’re selling too hard. What we at the Red Bull Media House do is try to fascinate and inspire the audience by creating valuable and emotionally engaging content.”

Red Bull produces more than 1,000 events a year, which Koppel says are “designed with great footage” in mind. And he said Red Bull Media House “have been storytellers from the very first moment” – implying that this is a world away from the content produced by other brands. Instead it’s an “editorial content provider”.

Its strategy is based on four principles. First: creating quality content. Second: that’s used to produce “relevant and credible media products”. Third, it establishes media channels. And fourth: it devises “innovative business models” for all this content.

The content is 600 hours a year, split into sports and lifestyle; nature and science; and tradition and inspiration categories. Content takes the form of feature films such as The Art of Flight and When The Trail Ends; TV documentaries including Red Bull Stratos, which focuses on the Baumgartner jump; and sports championships and series, like the FIA World Rally Championship and Red Bull X-Fighters contest.

On the media channels side, Red Bull runs the Red Bulletin lifestyle magazine, which has a circulation of more than 3m copies. RedBull.com is “the hub of our digital experience”, but the brand is also a mobile operator in many countries through its Red Bull Mobile arm. And on social media, Red Bull has 37m Facebook fans and 1.7m subscribers on YouTube.

Red Bull Media House had been working for more than five years on the Red Bull Stratos jump, including signing distribution partnerships (77 broadcasters screened the jump live) and preparing the way on YouTube and with partner websites for that famous live stream.

Baumgartner himself took the stage. “The jump itself is not the hardest part. It’s the tense moments before you open the door,” he said. “As soon as you open the door you lose the protection of the capsule… If the suit fails at that moment, it takes 15 seconds before your blood starts to boil, and you die.”

Baumgartner had been a skydiver for years before this particular jump, but how did he begin? As soon as he turned 16 he joined a skydiving club, then joined the Austrian army as a military skydiver.

Baumgartner stressed that safety was of the utmost concern throughout the project – “I did not want to die!” – although he declined to put a figure on how much the project cost over the five years.

Bulkley asked about the toughest times in the project, and Baumgartner said the problem wasn’t the jump, but rather the suit he had to train himself to wear for it.

“I had a really tough moment where I really thought I’d lost the project,” he said. “It’s really difficult inside the pressure suit… The primary goal was to spend five hours inside that suit… all the time, 50, 60 minutes after  went into the suit I was getting anxious.”

The point being that in the real event, there was absolutely no chance that Baumgartner could even open the suit’s visor. He worked with a psychiatrist to get over these issues, though.

“Everybody was thinking about the skydive… nobody thought about the suit itself creating the problems. The suit should be my friend, but in those first few years, it was my enemy… Then it became my friend!”

The obvious question: is he tempted to do another, higher skydive? “Hell no! I’m the first human person breaking the speed of sound. The reason it worked once doesn’t mean it will work again,” he said.

Will Red Bull follow up with its own similarly large-scale event with another athlete? “Absolutely, I’m sure there will be something to announce soon,” grinned Koppel. While, sadly, giving no further details.