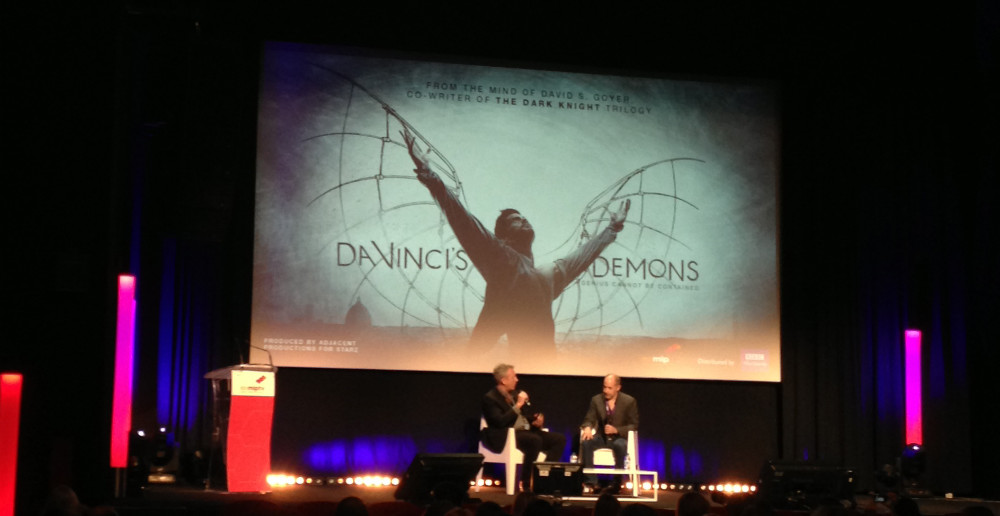 David S. Goyer is a man of many hats when it comes to Da Vinci’s Demons. Creator, writer, director and executive producer.

It follows a career that has taken in writing Blade, writing and exec-producing its sequel Blade II, and directing, writing and co-producing Blade: Trinity. He also worked with Christopher Nolan on The Dark Knight trilogy.

Goyer was interviewed at MIPTV today about his caree and latest project by Julian Newby, editor in chief of MIPTV News.

About two years ago, Goyer was approached by Adjacent Productions to work on a historical project for TV, kicking around ideas for likely figures to focus on. “Cleopatra, Genghis Khan, and I had a lifelong interest in Leonardo Da Vinci. I said ‘what about him?’ And they said ‘That sounds good!” he said.

Goyer talked about his youthful interest in superheroes, which filtered into the plans for Da Vinci’s Demons. “He’s a larger than life character… He’s a mythic figure.” Not an old bearded “Merlin-like” figure, as he’s become in the public imagination.

“This is a show about Da Vinci before he became Da Vinci,” said Goyer. “He was arrogant, he was self-destructive, and that usually goes hand-in-hand with people who are geniuses as well.”

Goyer was asked about what aspects of genius he focused on for the project, and how he showed them on-screen. “It forces myself and the other writers to make sure the scripts are really good! he said. “One of the things we really struggled with is how do you depict the world from Da Vinci’s eyes?”

The answer: something Goyer calls “Da Vinci Vision”, where time slows down and what Da Vinci is seeing in the real world merges with his notepad drawings. “Although he was tortured, there was also something very celebratory about him. And I think he saw a beauty in the natural world. In a way it was kind of evangelical.”

Goyer talked about Da Vinci’s famous inventions (or at least designs) from the helicopter to the machine gun, noting that “If Leonardo were alive today, he would have preferred to be known as a scientist and an inventor rather than a painter, even though he was a wonderful painter”.

How involved was Goyer in the casting? “Wasn’t involved at all,” he deadpanned. “Yeah, I cast everyone. The main issue at least in America, there was this discussion over whether to get people who were very well known or not. I argued that Da Vinci was the star… we just wanted to get the best actors.”

That included seeing more than 500 actors for the lead role. “I was worried that we weren’t going to find the right guy, then Tom [Riley] walked in the door and absolutely smashed it, as he might say.”

The series was shot in Swansea in Wales, with a second unit in Italy. Why Wales? “They have so many good castles, and the local government was very gracious in allowing us to film in them and blow things up, set fire to things and whatnot.”

How closely is Goyer sticking to the history of Da Vinci? Strictly or more liberally? “Historians would say liberal! I’m calling it a historical fantasy,” he said. “I think we’ve been true to the spirit of the characters and the relationships… and then there’s a little bit of invention.”

Goyer talked about the “big-canvas story events” that he tends to work on creatively, from The Dark Knight and Da Vinci’s Demons through to his consultancy work on the Call of Duty: Black Ops games.

“I think that increasingly television is becoming more event-like and more cinematic,” he said. “The one thing that’s a big difference between televisiona and film, particularly serial television… is you can take a novelistic approach.” So telling one story over eight episodes, and “one giant story” over the planned 60 hours.

An audience member asked whether Goyer deals with Da Vinci’s homosexuality in the series, or avoids it? “Yes, we do,” said Goyer. “I would argue bisexuality, but there’s no controversy we shy away from. He was famously arrested and tried for sodomy twice, and we will be dealing with that… I expect it to be a very controversial episode.”

He noted that it’s a completely different process, not least because in the latest game there are 32 different possible endings. “Non-linear storytelling,” he said. “I’ve gotten into non-linear storytelling. It’s something that Chris Nolan likes as well. The first episode of our series [Da Vinci’s Demons] starts with a scene that we jump back to later.”

In fact, there will be more flashbacks in future episodes, including what Goyer described as an “Easter egg” for viewers in the second season of the show, along similar lines.