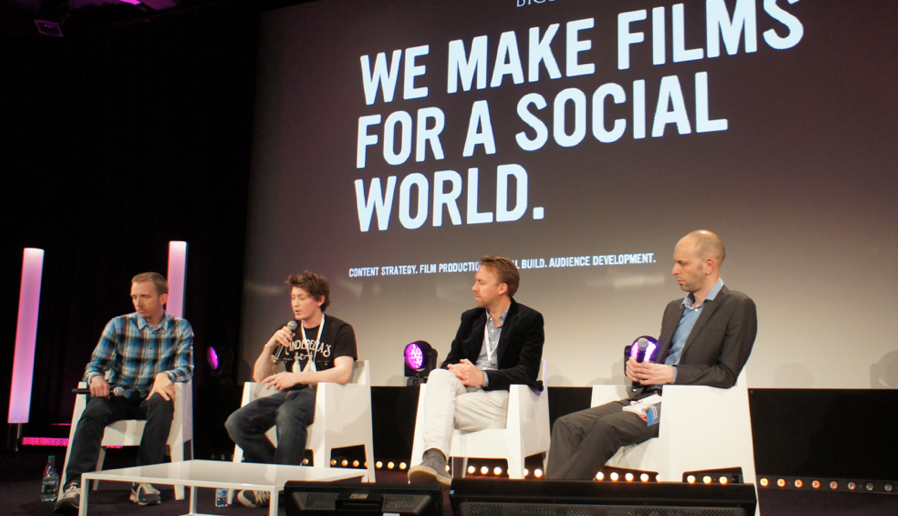 Bigballs, Smokebomb and B-Reel share pet projects and dual-screen insights at this MIPCube Talk.
By Angela Natividad on April 8, 2013 0 Comments

This session covered the latest work of three agencies that’ve produced exceptional dual-screen experiences in the past year. Here they are.

Creative director Jay Bennett of Smokebomb talked about “The Path“, a ‘hosted” social experience. Its centerpiece was The Creative Room. Using a platform integrating G+ Hangouts, Twitter and Facebook, they held live chats with writers and fans. They pulled out parts of the bible, characters and plots, and let fans help develop creative.

The idea, said Bennett, was to create an experience and universe that has a built-in fanbase before a series could even be shot.

“We’re not a machine,” Bennett warned. “This isn’t some Star Trek device for making a choice; writers still write this. But we’re definitely letting fans poke in.”

The best aspect of this footballing series is Comments Below, which links all Copa90 channels on the platform. Comments left for previous shows are incorporated into shows to come.

The series generated 230,000 YouTube subscribers, 600,000 Facebook Likes, 13 million views, and over 2500+ comments per show. This last figure is considered the most important; it demonstrates the living passion ignited in fans.

For some users today, said Welsh, “if it doesn’t happen on YouTube, it didn’t happen. It’s culturally irrelevant.”

B-Reel’s Peter Westlund presented last. One of their latest and most visible projects was The Beauty Inside for Intel & Toshiba. This web series follows a man who falls in love with a woman, but has trouble wooing her because he has a serious condition: every morning, he wakes up a different person.

“Our main platforms were Facebook and YouTube. We had weekly episodes for 6 weeks, plus smaller updates happening daily,” said Westlund, who added, “We had a good framework for allowing people to be part of the story.” People could be the protagonist, uploading their videos and images, which were curated by the B-Reel team.

“By allowing people to cocreate and be part of the story… you get this connection with the world of the story; you’re weaved into it,” Westlund said.

He also pointed to the importance of making social an integral an non-negotiable part of the story’s DNA.

“There has to be space for the audience. They have to fit into this world as well. It doesn’t take away the need of a great story, production or talent,” he emphasised.

However, respecting the audience comes first and foremost.

“People invest time and effort into your story, so I think it’s your responsibility to make sure they’re happy about where they end up at the end,” Westlund finished.