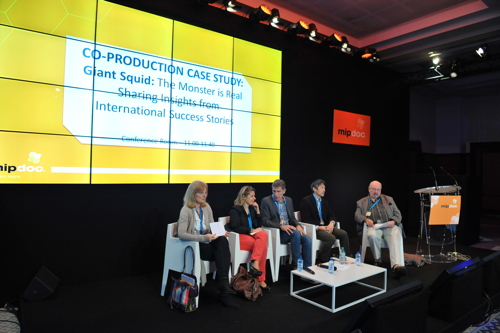 The first-ever footage of a living giant squid united production companies from US, EU and Japan at MIPDoc today.
By Angela Natividad on April 7, 2013 0 Comments

Moderator Pat Ferns called “Giant Squid: The Monster is Real” the “story about scientific, technological, creative and financial challenges,” but it was also a story about partnership. “Often in coproduction, sticking with your copartners is what matters,” said Ferns.

Alvaresse of ARTE called coproduction a question of trust. “For me NHK is a lifelong partner, so there’s a lot of trust there.”

Eartlett of Discovery, which worked closest with NHK, said it isn’t often that the network does outside coproductions. “Discovery will create a US-based programme, then our international channels will decide whether to join us. But most coproductions of interest to me are external.”

Iwasaki, who led the game, simply said coproduction is “necessary for us. For this giant squid project, we couldn’t advance without coproducers.”

It helps to consider the technology involved. NHK required investment in a vessel, experienced crew, a steel camera that could be dropped 1,000 feet undersea, and the development of a red light invisible to giant squid.

One of the major mitigating factors for finding coproducers was the topic’s mythological element. Said Alvaresse, “It’s a big myth, very Jules Verne, so we had to go there.” Hollstein agreed: “There’s the mystery: for many it’s a big fairy tale.”

Eartlett of Discovery, the first and fastest coproduction “yes” NHK got, said, “The chances of finding it on a scale of 1-10 were -3. But what the hell: the possibility of putting something out there that people hadn’t seen before is the sweet spot. One of our mottos is ‘satisfy curiosity’.”

In collaboration with a scientist, in 2004 NHK enjoyed its first success at nabbing footage: they lowered a steel camera that recuperated 500 images of a living giant squid. In 2006, they filmed moving images and made a 2-hour special, generating lots of response.

“NHK realised how much impact giant squid programmes have. Since then we’ve pitched a special programme for giant squid using submersibles, but it was always rejected because it costs a lot and there’s no guarantee for a film.”

In 2010 he had a last chance to convince the NHK’s controller. The day before the pitch, he had a conference call with Discovery’s Clark Bunting, who said yes so quickly it made everyone’s head spin. The inevitable result of this was the Squid Summit in Washington, a chance for Discovery and NHK’s folks to meet.

“Something we discovered over the years for coproduction is, the level of trust has to be extremely high,” said Eartlett. “Once you have to go back to the contract, you know you have a problem. So seeing ‘the whites of their eyes’ is very important.”

We were then treated to a trailer for “Monster Squid”. According to the narrator, “We now know they are indeed huge, and they grapple with whales. But they’re still one of earth’s last big enigmas.” This footage represents “the very first time [humans]saw the giant squid … alive.”

The coproduction’s format was unique. NHK produced its own documentary, and Discovery made a separate American version “tailored to the market: a difference in host, presenters, pacing and treatment of subject matter,” according to Eartlett, who added, “We had every single piece of footage that NHK had shot and vice versa.”

“Discovery’s story is according to their expeditions. Our story starts 10 years ago. We combined all our discoveries in one programme,” said Iwasaki.

ARTE and ZDF, whose coproduction participation was lighter, shared a version for their markets. Eartlett suggested they take the NHK version as he felt it would be better for international sales.

“This was probably the best coproduction experience I’ve had,” said Eartlett. “I’d be surprised if it could be replicated again. The idea of dual crews, 100% sharing and cooperation, is something that will stick in my mind for future coproductions.”

Hollstein built on that sentiment. “I’m afraid we won’t have this experience and challenge again because it was just unique. Working with NHK Japan was a great experience; no email went unanswered, there was no question for material. We were always under the impression that NHK tried finding solutions very quickly.”

“It was a real success,” Alvaresse agreed. “It was our best marketshare for primetime Sunday night [in France and Germany]. It was also the best for catch-up TV. It showed us that with good partners, everything is possible. But it was also a great collaboration because the topic was absolutely amazing.”