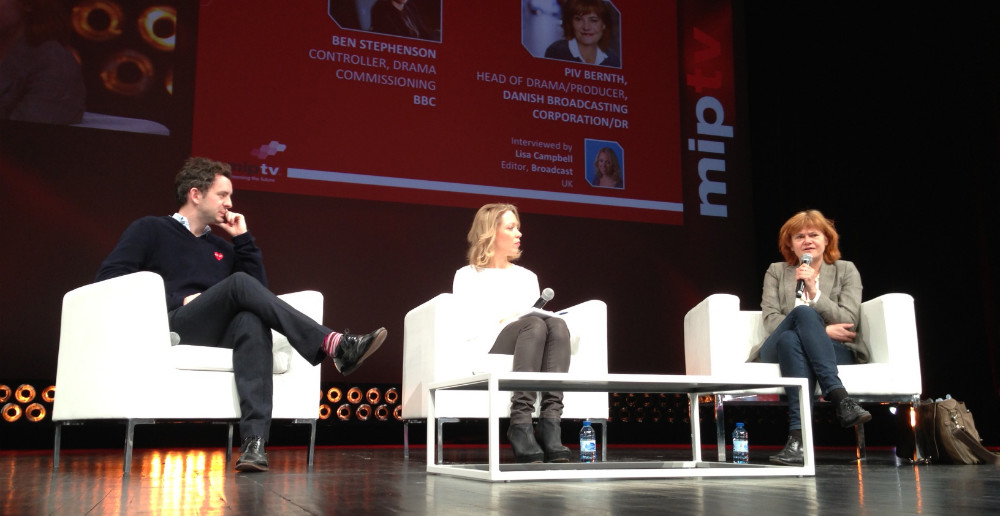 Piv Bernth and Ben Stephenson discuss TV drama strategies (and what next after The Killing and Borgen).
By Stuart Dredge on April 9, 2013 0 Comments

Ben Stephenson and Piv Bernth are two of the most successful drama commissioners operating in Europe at the moment, taking in Call the Midwife, Relentless and Death in Paradise under Stephenson’s watch as controller, drama commissioning at the BBC; and The Killing, The Bridge and Borgen under Bernth’s eye as head of drama at DR.

They took part in a double-header Media Mastermind session at MIPTV today, talking about their strategies, including co-productions. Starting off with The Killing for Bernth.

“We had no idea. We aired The Killing in 2007 in Denmark, all 20 episodes, and from them ond it took three years before it went internationally with a breakthrough,” she said. “It was not until it came to BBC4 that it really exploded, because the British were so happy with it.”

She said storytelling was the key to its success, as well as its decision to focus on a single crime investigation over the course of a series, rather than the previous detective formula of a new murder (or murders) every episode.

Drama used to be just 4% of DR’s output. Has that changed since The Killing, and the interest from overseas in co-productions? “The in-house budget is still the 4% of the total DR budget, but we have more external financing now. That’s nice, and we’re very open to all kinds of different ways to develop our projects.”

Bernth said that DR respected the decision of The Killing’s creator that it would be a trilogy, and “stop while it was still fresh… not trying to milk it until it was completely dried out. And that’s the same with Borgen… That’s why we thought we have to start all over again.”

DR has a new production which is shooting now called The Legacy – “a character-driven family drama” – a big historical production called 1864, and a crime drama that focuses more on economic crime and the financial crisis. Expect more male leads, too, following the female leads in DR’s previous dramas.

“We will have male leads in the coming series, because we want to know what happened to the men while we were working with the women! So that will be a new trend.”

Over to Stephenson, who was asked about his appetite for co-productions. Is the era of the ‘Euro-pudding’ well and truly over?

“The trend for increased co-production comes from two things. One is quite simply that the abition of the creative talent – mostly writers but also producers and directors – is increasing daily. And that doesn’t always require big budgets, but somtimes it does.”

And second, the creative reasons: “In the past, all countries probably felt that their drama was their drama… but we see actually we’ve all got quite a lot in common, and actually the audiences are becoming more au fait with all things worldwide. Audiences don’t mind subtitles…”

Stephenson said the “best, most microscopic, most local drama will feel universal”, and warned that it’s when people try to make drama that appeals internationally that they may end up with something bland. He cited the BBC’s Sherlock as an example.

“Everything about it is as English as English can get… If you do something well for your own country, and the idea has attraction for abroad, it may well work,” said Stephenson.

Bernth chimed in, saying that the reason Scandinavian drama is currently so successful is because it is so Scandinavian.

Stephenson talked about a drama called The Great War which the BBC has just commissioned: a five-part drama that tells one year of the war each episode from the point of view of two soldiers: one British and one German. The BBC is looking for partners on the project, which is being produced by Tony Jordan’s Red Planet.

Stephenson also announced another new commission for the BBC from Jimmy McGovern about the birth of Australia. “A really enormously ambitious idea that’s going to shoot in Australia probably next year,” he said.

He cited Jane Campion’s Top of the Lake, which the BBC is also involved in, as another example of this trend. “The world is getting smaller and smaller, and that is really exciting for producers and writers.”

Bernth talked about remakes, and the importance of keeping the things that fascinated audiences from the original version, while changing them to make them relevant to the new country in which the remake is airing.

She had some critical words for the US version of The Killing though, which Bernth said started out with many elements of the original, before veering off.

Stephenson talked about the potential downside of co-productions, where producers feel they’re having to navigate between the different demands of the various broadcasters involved, detracting from their focus on making the show itself.

“You’ve got to go in thinking ‘is this going to add value to the show?’,” he said. Which is not to say that there aren’t “difficult discussions” to be had along the way, but that if disagreements are fundamental, it’s important to walk away. “Or at least threaten to walk away, which I’ve found works rather well!”

Bernth agreed. “The producer and the writer is at the end of the table all the time… someone has to own the show, and they have to completely control the show,” she said. “You have to protect the creativity of the writer, and the producer, and the director… They are in control all the time, and that is very important I think.”

The conversation turned back to the strong female leads in DR’s dramas. “We were curious. We haven’t really told stories about men for a long time. What’s happening?.. And we had some writers who said ‘We’re fed up with all these strong women, what about the men?’,” she said, smiling. “Let’s focus on the men. I think it’s a trend coming now.”

Stephenson was asked about binge-viewing and series like House of Cards on Netflix, where the entire series was made available to watch online at the same time, rather than released at weekly intervals. Is the BBC considering doing anything along those lines?

“No, because for us, terrestrial TV, the art of actually turning it on and watching with the rest of the nation is still a really huge thing in Great Britain,” he said. “Probably about 2% of our watched TV is iPlayer. 30% probably is recorded, and the rest of it’s live. For our biggest dramas, usually the majority of the audience is watchign it live.”

Stephenson went on to talk about Twitter buzz around shows – which relies on them being watched live, noting that it’s not as seamless with on-demand shows on services like Netflix.

“Those shared experiences are something that’s really important actually for TV,” he said. “Netflix is amazing, what impact it has I don’t know. I’ll leave that to the techie people. For us who make the drama, I suspect we don’t really care how people watch it in the future… As long as there’s an appetite for great drama, the way it’s put across to the audience is for people who understand technology. And that ain’t me!“