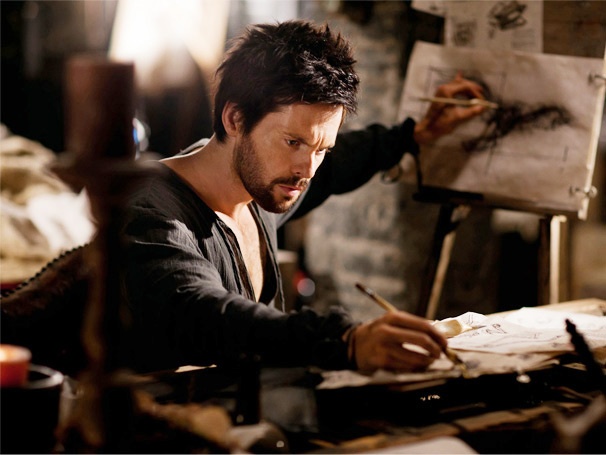 The showrunner and star of MIPTV's World Premiere Screening series talk to Julian Newby.
By James Martin on April 8, 2013 0 Comments

Writer and showrunner David S Goyer has turned Leonardo Da Vinci into something of a superhero for Starz Entertainment’s new drama series Da Vinci’s Demons – tonight’s World Premiere TV Screening. The writer of Christopher Nolan’s Batman trilogy brings some of the altruistic heroism of the caped crusader to the character, turning on its head the indelible image of grey-bearded old man.

“Well, you know, he wasn’t just a painter, he really wasn’t,” Goyer said. “And I also don’t think that he wanted to be remembered as a painter. I think he wanted to be known as an inventor or scientist, but it was painting that got him the money to pursue those interests.” He added: “Some people said ‘Oh, you’re turning him into an action star!’ If you read the biographies of him, he was tall and a strapping guy… he was known to be a very good horse rider, he was ambidextrous and a very good swordsman.”

British actor Tom Riley (photo) plays the young Leonardo. “I knew the high-school version of who he was — this figure frozen in stasis in his 60s, incredibly wise, having lived a long life, having seen an incredible amount of things and created these beautiful works of art. And that image has lived on through generations,” Riley said. “What I didn’t know about was so much of the other stuff that he was involved in that wasn’t art-based.” He added: “If I was at school or if I was having to study that old man with a beard who painted the Mona Lisa, this would certainly give me more of an incentive to do so.”

The Batman connection came well before Goyer got involved in the series. “Bob Kane who invented Batman based the designs of Batman’s cape on Da Vinci’s glider,” Goyer said. “So he cited Da Vinci as being one of the leading influences for Batman.”

The World Premiere TV Screening of Da Vinci’s Demons takes place in the Grand Auditorium tonight at 18.15. The screening will be followed by an on-stage discussion with Goyer, Riley and his co-star Lara Pulver who plays Clarice Orsini. After that they will walk the red carpet to the Opening Night Party of the 50th MIPTV.
At this morning’s Creator’s Masterclass at 10.05 in the Producers’ Hub, Goyer speaks about the making of Da Vinci’s Demon’s.

This and more in the MIPTV News issue 1, online here!