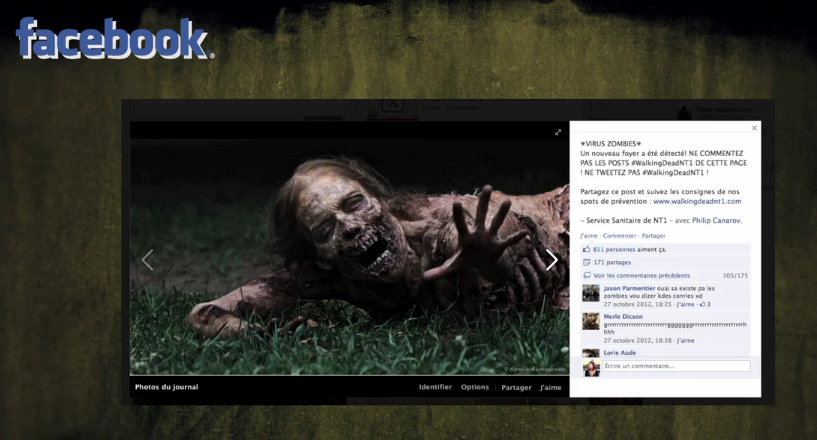 How social TV agency Darewin made The Walking Dead viral in France, 2 years after its US launch!
By Angela Natividad on March 26, 2013 1 Comment

It ain’t easy being late to market. But this was the case for Walking Dead, which hit French airwaves two years after the AMC show became a global phenomenon. Through the above case study, agency Darewin demonstrates how it worked with underdog French network NT1 to attract TV audiences for a widely-pirated show… while improving NT1’s social cred in the process.

Using hashtag #WalkingDeadNT1 and leveraging all social platforms (Facebook, Twitter and blogs), Darewin created a real-life “contagion” in which zombies actually attacked users throughout the web. The result: global coverage, infectious enthusiasm for the season premiere, and one of the most-livetweeted series launches in the French market.

This is how social TV is done: by making the spirit of a show contagious across multiple supports, you can enliven a dormant fanbase. Hats off all round!

Angela Natividad is a frequent contributor to MIPBlog, and a communications consultant for Darewin. Follow her on Twitter hee-yah!