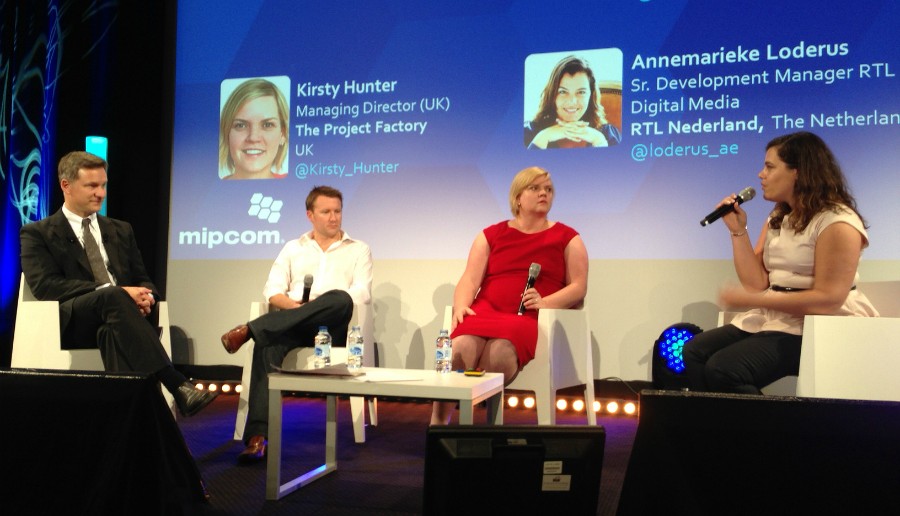 Liveblog: Why fans are a TV company’s most precious asset

Fans, Likes, followers, comments… Social media and fan communities have never been far from the discussion at MIPCOM 2012’s digital sessions. This afternoon, a panel explored the nature of online fandom, and how broadcasters and producers can tap into it.

“We’ve turned a corner in digital media now, because there’s a critical mass of audience on smartphones and tablets and social networks that truly want to engage in your programme,” said Tercek, by way of introduction.

Loderus started the session by talking about a promotion called “Wie is Tim?” to support a long-running soap opera on RTL: Goede Tijden, Slechte Tijden (GTST). “We were looking for ways to engage the fans during the summer,” she said – the period when the show doesn’t air. Endemol and The Project Factory worked on the project with RTL.

It was a transmedia project across various platforms, including Facebook, Twitter and GTST’s own website, as well as a mobile app, which was downloaded 280,000 times. There were also real-world fan meetups to hunt for the Tim character’s belongings, via a competition.

One out of six viewers downloaded the app, and at the start of the next series, the show’s audience share increased by 25%.

It was also important to get the actors involved. “The secret is that we all worked together,” said Loderus. “The fanbase of GTST is enormous, and people are so engaged already, so for me it was an absolute delight to work with this fanbase.”

Tim had an online life on Facebook and Twitter, following fans back when they followed him. They could also track his movements across the Netherlands using the app. “The market research we did showed that people were more engaged when they used the app than when they didn’t,” she said.

The Project Factory’s Kirsty Hunter talked about her company’s work with production companies. “What was amazing was how they trusted us, and how Endemol trusted us with such a well-loved brand and such a rabid audience,” she said. Endemol’s head writers worked closely with The Project Factory, including on Tim’s story arc on digital platforms.

One interesting point: fans interacting with the app could watch the first episode of the show a week early, yet Loderus said this didn’t have a negative impact on ratings when it aired on TV.

Hunter talked about some other projects: Summer Daze with BlackBerry for Channel 4, around the summer music festivals. It was a show with a cast of actors who visited various festivals, with a weekly episode on TV and “real-time storytelling online – there was no such thing as spoilers, we could reveal any storyline as it happened”.

The cast members were also on Twitter, getting thousands of followers, and the show also saw guest appearances from music artists who were playing the festivals – which saw retweets from those bands’ official Twitter profiles for the Summer Daze content.

“This was about connecting fans and it was about tapping into their networks, and spreading some of this real-time storytelling,” said Hunter, before moving on to another project: one with Endemol subsidiary Tiger Aspect on its The Great British Property Scandal season of programming.

The digital aspects involved encouraging people to sign up to a campaign to petition UK Prime Minister David Cameron over the UK’s housing crisis, and it signed up 100,000 people in six days. An example of a digital campaign actually having an effect on the real world.

Fans were also invited to report empty homes on nearby streets, with more than 8,000 reported – putting many of them back in use for accommodation. “One of our viewers alone reported 612 empty homes in Hartlepool, which is incredible,” said Hunter.

Onto Shazam, and Dendle explaining how the company has moved from being a pure music identification app, to something that can be used to identify TV ads and shows, and serve up related content and competitions accordingly.

“We’ve had 250m users of the service to date, and are still growing massively with 2m new users every week. And those people are doing 10m new recognitions a day,” said Dendle.

He pointed out that Shazam has been working with broadcasters and producers across a range of TV genres, including American Idol. “It really acted as a companion app to the experience of watching the show,” he said.

By tagging a contestant while they were singing a song, viewers could find out about the original song and buy it from iTunes, look at contestant biographies, and get news from the show.

“We’re not trying to keep that content within our app. We’re very much about getting users to engage with that content where it is currently… we try to push them out to where that content currently sits: with a broadcaster or with a brand in the case of an advertisement.”

Shazam has also worked with Red Bull on a two-screen project where viewers can tag a snowboarding show, then watch synchronised video on their smartphone of the run from the snowboarder’s point of view. “Live sporting events, shows like the Grammys… all of those type of events can have something that’s synchronised.”

Some stats about a series with NBC in the US, where Shazam tracked the performance of the event and surveyed users. 10% of the ‘capable population’ engaged – that being 50% of the TV audience, relating to smartphone penetration in the US as a whole. 20% of these people downloaded Shazam just to interact, and mobile traffic surged by 1,800%, with the effect lasting for five days.

Is there a potential “creepiness factor” wondered Tercek – Shazam building second-screen content around broadcasters’ shows and audiences? “We hope not,” said Dendle, noting that Shazam tries to put a link in to broadcasters’ own websites. But Loderus chipped in and said it’s important that broadcasters and producers should be responsible for the content in these cases.

“I think there’s a lot of discussion going on about this topic,” she said. “I think the power of storytelling itself, it’s so massive, and that is the key to the success and the real engagement of the formats we air and all the digital layers we connect to it.”

What about viewers contributing content to a show and sharing it with their friends? Hunter said that The Project Factory’s partners – broadcasters and producers – are “more interested in shares than they are in Likes. They like Likes, but they love shares!” They want to see fans sharing their content (legally) on Facebook and Twitter, rather than just signing up as a fan.