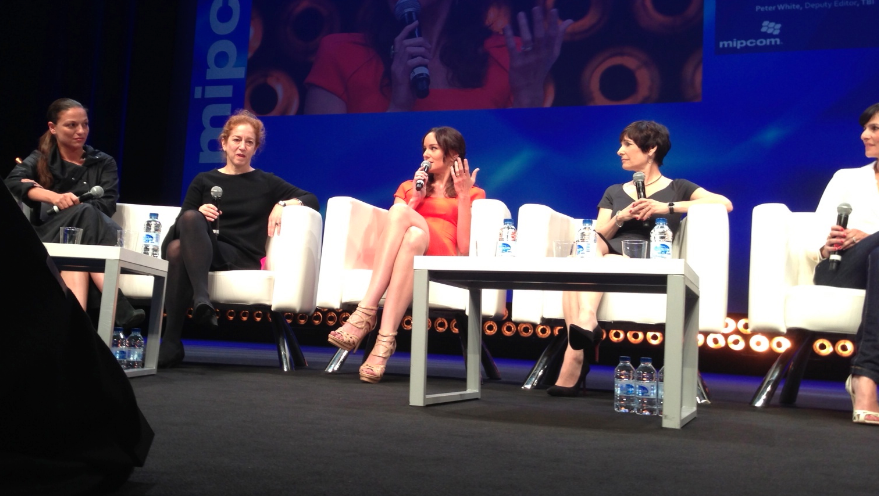 Liveblog: The Walking Dead, the Virus that Invaded the Globe

The Walking Dead's cast and team discuss the challenges and rewards of its global 'theatrical' launch
By Angela Natividad on October 9, 2012 0 Comments

The crux of this femme-packed super creative panel was The Walking Dead’s epic decision to release globally and maintain a production planning that more or less fixed to a universal date, everywhere in the world.

“Why launch a show on a global level and treat it like a theatrical release when TV is a local business?” FIC’s Sharon Tal Yguado kicked off.

“Once, if you were not a world traveler, you would find out about a show when it was launched in your market, and sometimes that happened a year after it was launched in the US.” Expectations have obviously changed in the digital world. According to Yguado, we must acknowledge “the risk that is there if expectations are not met, and what I mean by that is piracy.”

So “why not capitalise on these global conversations and make them truly global?”

For this reason, Walking Dead launched on a global date.

“Because of the filmic values of the show, because of the topic that we were dealing with, the best way to launch The Walking Dead was through a virtual — or sometimes very real — infection of the world,” said FIC’s Alexandra Marinescu. “We started at Comic Con and aggregated bigger audiences as we got closer to TX. For not having any reference for it before, we’re all very proud of what we achieved.”

It certainly helped that The Walking Dead was treated differently than shows typically are. “We did feel like the pretty girl at the dance, said executive producer Gale Anne Hurd. “We had two suitors, and we had to choose. And they were both pretty impressive. The difference was that AMC and Fox International Channels offered something that no one else in their right minds would have offered at the time, which is ‘we won’t make you go to pilot‘, the standard way things are done in the US.” Instead, they commissioned six episodes and went straight to launch.

“There was no way that we could turn that down. That meant we were on the air, that we bypassed the really traumatic pilot process, the upfronts and all those things that traditionally one has to endure.”

A unity over how to perceive the show internally, and thus market it, helped as well. “In the world of The Walking Dead, this is really happening. We’re not waking up with the audience; this is dead real,” said Hurd.

So they focused on finding actors who could make the characters living and iconic, not actors with great TV cred. Actress Sarah Wayne Callies, for example, had just completed a failed Canadian pilot when The Walking Dead fell into her lap. “When I read it, I wasn’t reading a TV pilot. I was reading a movie.”

For her, it’s bigger than a gimmicky zombie show. “The zombies are what initially garnered us support from the fans. But to me it was a human story.”

This too, impacted the logistically-challenging global launch of the show. Linda Schupack of AMC cast light on those unique calisthenics: “It was operations, it was creative, marketing and activation… but what was really important for all of us is that we all positioned this in the same way: a character drama.”

She elaborated: “We were selling the human emotions and this moodiness first. It was a character drama set against the backdrop of the zombie apocalypse. The fact that we were coming from the same place made the creative process a lot easier. We could interpret and tweak for other markets, but everything had the same feel.”

One visible repercussion of this was the choice not to show zombies in the marketing materials. “It was risky but definitely the right move,” she said.

Schupack agreed. Linda: “As soon as you show a zombie in any of these materials, it becomes horror”… and the character drama loses the spotlight.

FIC’s Alexandra Marinescu put added marketing’s own perspective to that. “For season 1 we had to sell what was basically a zombie horror niche show, but after that we had a franchise on our hands.” This led to more liberties with activation and digital.

“‘Zombies’ was no longer a bad word for us marketeers, it became something we embraced” — which helped inform what they were able to do creatively when the show globally split its season 2 into two parts, leaving a gaping hiatus in between.

Yguado relived that particular nightmare with us. For films, she pointed out, “you have box office weekend, and that really concludes the success of a movie. But with a TV show, this is really the beginning. We knew we were gonna support this show day in and day out” on a global level.

That sometimes means committing to things you’re not prepared to. “I remember calls where Marci gave me heart attacks, saying ‘we’re creating this mid-season break’ — which we thought didn’t work in the international market. So there was a serious conversation about whether we keep our air date aligned, or whether we wait for them to end their break and start at that time. We all knew knew the right thing to do … but there was a huge risk involved, we didn’t know how it would fly.”

The Walking Dead had already broken television drama records in the US and internationally. So when the ratings arrived after the finale, “We were very encouraged, it was very rewarding,” Yguado sighed.

“When you’re launching a show in 120 countries at the same time as the US launch, your production schedules are very affected,” commiserated AMC’s Marci Wiseman.