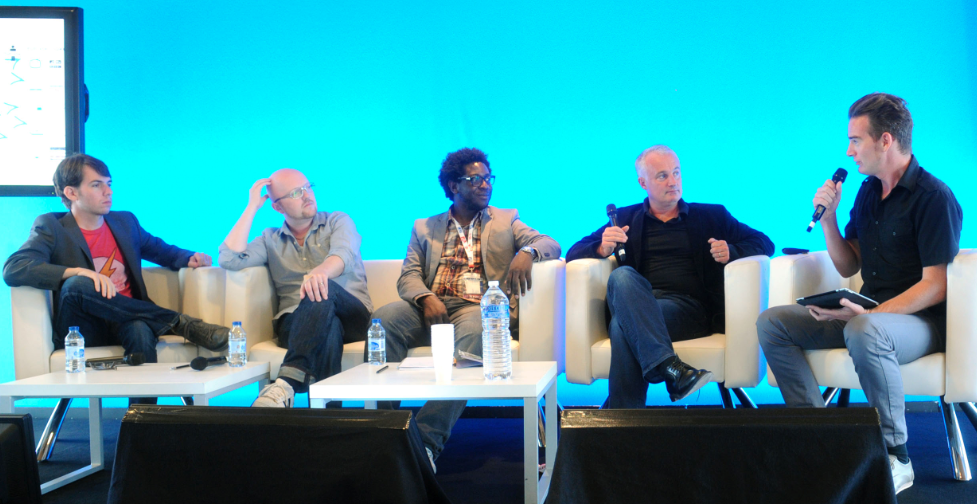 Industry experts band together to recap the week's trends, technology and changes in the air
By Angela Natividad on October 11, 2012 2 Comments

MIPCOM continued its tradition of finishing with a wrapup panel of the week’s industry experts without agendas. Moderated by MIPBlog’s James Martin, each talked about deals of note seen this week, and trends to come. Monetisation, who “owns” social, and a more intuitive integration of social into TV were major themes.

“It’s changing the window in particular, and changing the coproduction partners in the space,” he explained. Hulu’s coproduction with the BBC for “The Thick of It”, as well as Fremantle’s long-term deal with Vuguru, were his key examples of this in the week.

“Vuguru is seen as the quality end of digital-only production,” Cowley said. Fremantle’s decision to choose them for a “wide-ranging deal just shows that major guys, major distributors, are recognising that they need to have the capability of acquiring digital-only content.”

“I believe that now producers and broadcasters now consider digital no longer as enemy but as an ally,” Oyekanmi elaborated. “Platforms and content are multiplying at an amazing rate… we can now engage through time, space and platform, which is a great asset. We all connect, and once you connect, you can monetise.”

He also said it was crucial to connect via content and strategy. For him, the best example was “Rovio connecting a huge, new brand, Angry Birds, to a brand that’s 30 years old and has a huge fanbase” — Star Wars. “It expands both their worlds — it’s brilliant,” Oyekanmi beamed.

Staffans underlined the importance of sympathising with the entertainment world. The TV industry is full of people who want to create good TV, and already that’s hard. What’s more, “TV’s been dragged kicking and screaming into this ‘new’ digital world,” he said, “But the same goes for gaming companies” and other online companies. “They need to meet the TV industry halfway.”

Part of doing this is being able to identify trends that are coherent and not ephemeral, destined to disappear and “make you look stupid in two years’ time,” Staffans went on.

“I think that a lot of people attending MIP would be comfortable and happy to just buy good shows on beta cassettes.”

It’s also important to remember what’s going on with the audience. Omri Marcus said the things we can do with TV formats are getting “more complicated and more smart” in their storytelling power. “The audience demands more and more complicated narratives and stories. But at the same time, it also demands ‘Honey Boo Boo’,” he reminded us.

He also touched on how complicated it is to produce second-screen content. “In game shows they are kind of inviting you to play, but in comedies it’s complicated because you want to focus,” Marcus said.

Staffans agreed. “One reason we haven’t seen a second-screen experience that is absolutely vital for you is that it’s hard to sell here. People are here to buy television shows. It’s up to us as content developers and producers to find solutions.”

Cowley pointed out that the problem is often the allocation of money. “Money in marketing is dealt with separately from money in story,” which is what leads to these fights about who should “own” social, digital and second-screen development.

Oyekanmi took this further, observing that it’s not just us that are impatient for change; users are, too. “Viewers are impatient.” Which is why it’s ridiculous to wait months or years to launch an app when the public’s already been on the platform for a long time.

“It’s very important to remember we’re working as content producers for viewers, and to know how far the viewers have already gone. They’re already quite ahead of us. I believe we should follow their lead, because they’re the ones we have to satisfy,” he said.

As for who “owns” social? Producers should own it, Oyekanmi pressed. “A great show is a great producer, but also a great broadcaster who’s willing to take the risk. It’s a combination of both talents” — but the producers tell the story and should thus be able to control how it moves in the world.

He nonetheless encouraged producers to work with specialists in harnessing the social unicorn. “You could be the best TV producer in the world, but you’re gonna have a hard time building the best digital experience, just because it’s not what you do.” Learn from the best people in the market; find the specialists.

Thus concluded another rumination-rich MIPCOM. Everyone seemed to agree, however, that the fractured universe of social, content and multiple distribution platforms are beginning to take on a cohesive whole.