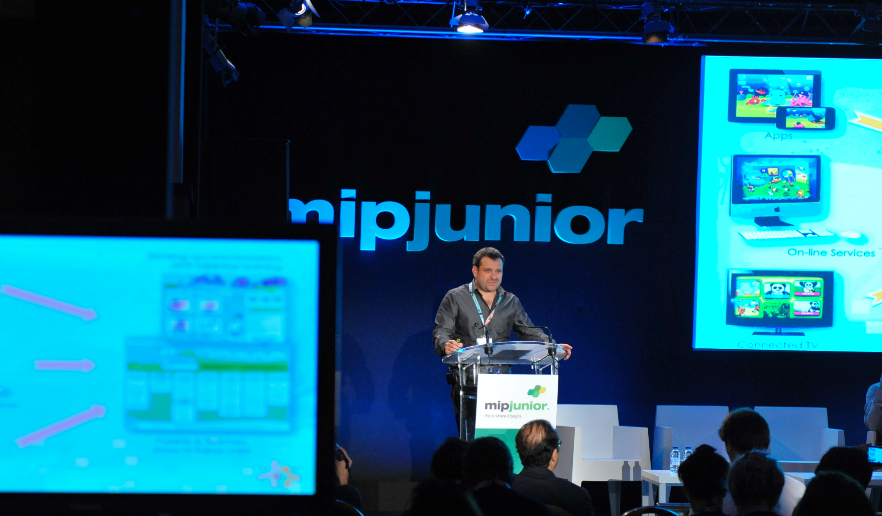 We’ve heard from digital commissioners at broadcasters during this year’s MIPJunior, but what about the producers of cross-platform storytelling? A panel this afternoon saw five talking about their work.

Aniorté was first to speak, talking about Tribal Nova’s work on educational content and games for children. Its core activity is games-based learning software for PC and touchscreen devices, often working with big publishers and broadcasters to develop and promote them: PBS, CBC and Bayard, among others.

This includes a suite of apps called ‘iLearn With’, where parents can check in on their children’s progress, and get recommendations about the next app to download for them.

Second up was Vince Commisso of 9 Story Entertainment. His company mainly focuses on linear content for television, but a few years ago it found the website Almost Naked Animals, based on designs by a children’s book illustrator called Noah Z. Jones.

He had more than 60 characters, but 9 Story took the seven most popular ones and developed a series around them. The show was aimed at 6-11 year-old boys, but ended up with a more balanced audience, as girls responded to the female characters as well.

Toy companies are now involved, creating talking plush toys, gadgets and other toys. They tie into a “Super Game platform”: an online game where people can unlock new levels by buying the physical merchandise and getting codes – although they’re also being swapped online, which Commisso said is fine, since they’re driving people to the game.

“It started digital, it went to television, and now it’s going back to digital,” said Commisso.

Third up was Jake Manion from Aardman, talking about its digital operations. The digital division launched around five years ago, mainly to create brand websites and promotional games, and start building fan communities.

“Increasingly what we do is try to take our existing brands and start to expand them into digital using our tools that we can do with gaming and community based activities, and actually turn these properties that were strictly broadcast before, into stories that are properly interactive,” he said.

Fourth to speak was Zodiak’s Alex Moore. In the short term, the company is using social and digital travels to build more brand awareness and enhance the audience’s core experience, but the long-term goal is to also make money from this.

The company is keen to explore second-screen apps for kids, which synchronise with the shows that children are watching to offer additional content. Moore praised Disney’s work with second-screen apps that sync with its films. “We’re looking to make stuff in second screen slightly less of a distraction – less of a nice-to-have and more core to the brand experience,” he said.

In other words, can young viewers actually compete in shows, and the company is working on a second-screen app for Mister Maker with IpDipSkyBlue, using audio watermarking to synchronise the app with the show.

“We’re not going to be focusing a great deal of budget and resource on our dotcom sites for our brands,” said Moore. “Our traffic is predominantly going to broadcaster sites.” Instead, Zodiak is focusing on creating high-quality digital content that those network partners “will be proud to shout about”.

“We’re particularly interested in e-books and gaming apps,” he said, alluding to an app on the way in 2013 for children’s show Tickety Toc.

Finally, Miki Mori from NHK spoke about her company’s work on an iPad app based on a science educational show called Discover Science, which runs a different “mega-experiment” in every episode.

She showed a demo of pendulums where children can play with the same experiment that was shown in the TV show.