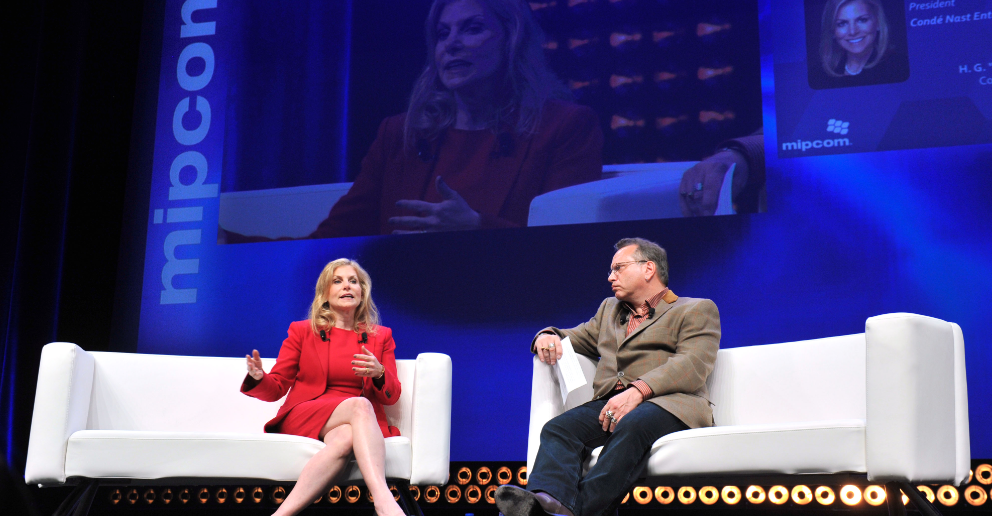 To evolve, online must focus on longer-form content and richer stories, with which Condé Nast can help.
By Angela Natividad on October 9, 2012 0 Comments

“Digital content is evolving today in much the same way that cable evolved a generation ago” — from music vignettes to long-form programming, she said. And in general the two formats are more similar than we think: CollegeHumor.com, for example, is easily the digital stepcousin of Comedy Central.

She pointed out how unexpected it was that cable grew to dominate over network TV. But the main reason top cable channels survived and didn’t just thrive is because they both lengthened format and became better storytellers.

“They filled their time slots with memorable shows that targeted a niche and spoke to audiences that’ve never been spoken to,” said Ostroff. Both are key to the evolution of digital.

Asked by Buzz why Condé Nast will “survive” where others have failed (likely a reference to the faltering press industry), Ostroff said, “We all have to look at the 360 of our world right now. The lines are really blurring, and it’s gonna be hard to differentiate where a magazine starts and video content begins because on our tablets, we can get video as part of our magazine.”

For these reasons it’s important for everyone, including content producers, to look at IP rights differently.

Ostroff also believes her magazines play a larger role in the entertainment space than many might imagine. The original mystique of magazines was that they were an art form, she said.

“It was never about budgets. Editors had the freedom to have a vision and play it out. And we’ve seen so many films… that have come from these magazines in the past decade alone.”

Buzz illustrated her point: The Addams family came from a New Yorker cartoon, and Eat Pray Love leapt right out of Allure Magazine.

She later circled back to reemphasise how digital’s evolution will naturally match cable’s own trajectory. “The average person in the US watches 35 hours of television per week. We’ve compared that to about 2 hours of digital content viewing.”

She does believe digital will be far more significant this time next year, but in the meantime it’ll have to beef up its content length. It may be true that people prefer shorter online content now, but this may not be the case in the near future. Hulu and Netflix, for example, are both announcing more long-form content, both original and acquired.

“Two-thirds of people viewing video on their tablet are watching long-form video” already, she pointed out.

“You keep shows on for different reasons, but at the end of the day, it’s gotta be about money, it’s gotta make metric sense.” Our objective must be to find those metrics. But “in the next few years it will become crystal clear what this metric is,” she believes.

“I’d say that when we come back next year, digital will have a stronger presence and television will continue to thrive.” The same goes for films: “We see films released in theatres and on-demand now.”

The final question concerned what drives her personally.

“We have 80,000 articles archived,” Ostroff said. “It’s amazing to find that even a lot of producers in the hollywood community have optioned articles like a 1975 article from The New Yorker. There’s just so much opportunity there and we all know it’s so hard to come up with new ideas.”

Being able to have that much content, those ideas and characters at your fingertips, is powerful for content creators of tomorrow, she asserted.