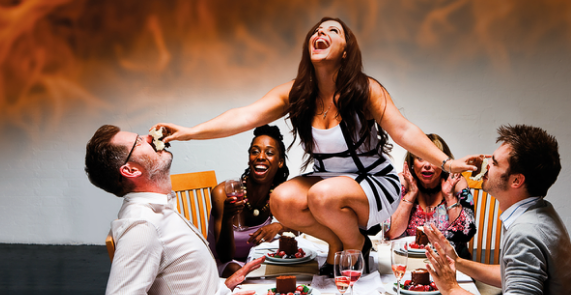 Photo: ITV Studios’ Come Dine With Me, now produced in 34 countries, was by far the top performing European TV format of 2011

The TV Formats in Europe report, which studied 50 major formats across 98 channels in 16 territories, revealed that the 2011 value was up 8.4% on the 2010 total, despite the number of hours broadcast increasing by only 2.4%.

“This demonstrates that the formats market still has expansion potential, despite tough times for European broadcasters,” says Michael Cluff, director of Madigan Cluff, which supplied the report’s programme-value calculations, based on broadcasters’ net revenues and income per day part.

Published in May, the 140-page report — available at a 10% discount to FRAPA members (see below) — analysed European programme-schedule databases to provide answers to such pertinent questions as how much channels benefit from screening formats, which channels screen the most hours, which formats work best where, which shows are gaining momentum and which are waning, and how many hours of formats are screened during primetime.

It was, unsurprisingly, a hugely labour-intensive job. “A report of this size and scope requires a massive engine behind it. It takes a lot of painstaking research to get to the real value of a format,” says Jonathan Bailey, managing director of ETS, whose 30-strong team has spent the last year trawling through databases, advertising and licence-fee records, TV listings, online forums, financials and other proprietary information.

One of the main challenges, according to Simon Murray, managing director of Digital TV Research, was ensuring that only local adaptations, as opposed to finished programming, were included in the final calculations. It is not uncommon, he points out, for three versions of a super-format like MasterChef to be on air in a territory simultaneously — the original UK show, the US version and the local adaptation. “That muddies the water,” Murray adds. “It can be very hard to distinguish between a genuine local format and an imported show.”

Endemol’s indefatigable Big Brother, meanwhile, has been dropping down the league table since 2009, as have Who Wants To Be A Millionaire?, Deal or No Deal and Wheel of Fortune.

On the up, however, are Endemol’s Money Drop, screened for 615 hours, and Talpa’s The Voice (312 hours). As Bailey points out, these are impressive results considering that both shows only launched in 2010. “Both are expected to grow sharply in 2012,” he adds.

The report also confirms that the UK remains Europe’s formats heartland. Not only did it screen the highest number of format hours in 2011, but it is also home to several of the world’s most successful players, including ITV Studios, BBC Worldwide and All3Media.

The report’s co-authors are hoping that the TV Formats In Europe report will become an annual publication. Despite its price tag — it costs £2,000 — sales have been brisk. “We’re very pleased with the take-up so far,” Cluff reports. “Most of Europe’s big format players and broadcasters have now bought a copy.”

Murray concludes: “TV Formats in Europe provides a snapshot of the format market at this moment in time. It will enable us, in future, to look back —and say, ‘This is how much the European formats market was worth in 2011. This is who was doing what, where and for how much — and this is how much it’s progressed since’.”

This article was orignally published on the website of FRAPA, the Format Recognition and Protection Association. Click here for details of how FRAPA members can buy the TV Formats In Europe report with a 10% discount.