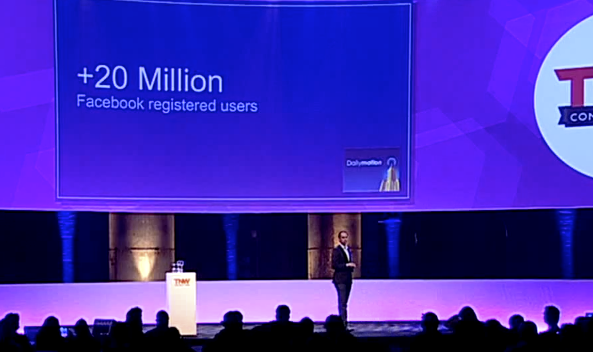 Dailymotion, Canal+, Deezer and The Guardian are seeing explosive growth after integrating their content with Facebook, the firm's head of content told TheNextWeb conference last week.
By James Martin on May 3, 2012 0 Comments

Speaking at TheNextWeb Conference in Amsterdam, Facebook’s director of platform partnerships EMEA gave content owners essential tips on how to make the most of the world’s largest social network.

TV and video companies such as Dailymotion, Canal+ and Sky were all cited as examples of best-practice users of Facebook’s huge potiential for sharing content virally.

It begins, said Christian Hernandez, with taking on board two key things about Facebook’s 900 million users. Firstly, 80 % their friends will be in the same country as them. Secondly, Facebook is now focusing not on six, but three degrees of separation. Because the fim has discovered that you’re more likely to share content from friends of friends of friends than from those people closest to you.

“So make it easy for me to share with all of my friends (whatever their proximity to me); that’s where virality takes off,” said Hernandez.

So how exactly do I “close the viral loop”, as Hernandez puts it? Firstly, use the Open Graph – Facebook’s system which lets you log into any site or app using your Facebook ID – “so it can share easily what I’m doing.” He added: “we provide the platform for your content to be shared. So think not only about how to get traffic, but also about how to get people to share your content with their friends. Then you’ve got them into a loop.”

Hernandez then rolled out a few telling examples of who has “got it right” so far. First up, Dailymotion, the world’s second largest video site, acquired half of its 20 million Facebook-sourced users in a week, after successfully integrating its content on the social network.

Secondly, perhaps one of the most famous examples of Facebook integration: UK newspaper The Guardian. When it decided to launch one of the social network’s first news apps, where users consume its content not on its site, but in a Facebook app, it knew it ran the risk of losing at least 10% of its website’s traffic.

It turns out The Guardian’s Facebook app attracted 10 million active users. Better still: “it opened up a whole new demographic for them: the under 24s”, said Hernandez, adding that this was a demographic the newspaper had traditionally had a lot of difficulty in reaching.

Perhaps most incredibly, Hernandez revealed that Facebook has now become a major traffic provider to guardian.co.uk. Social – i.e. Facebook – has surpassed search – i.e. Google – in terms of driving traffic to what is one of the world’s biggest news sites.

Hernandez also cited French music streaming service Deezer as another content provider that has successfully “closed the loop”. Since integrating Facebook, the service has seen 200,000 new users per week, userbase growth of 500%, and tripled traffic to their mobile app.

He went on to reveal what he called “a new class of Timeline apps”, covering 18 companies across 11 countries in Europe and the Middle East. The aforementioned “local” element is key to these new launches, which include newspapers like France’s Le Monde and broadcaster Sky Italy and France’s Canal+. “If  I watch a show on Canal+, it becomes part of my timeline,” said Hernandez.

And finally, to ram home the platform’s efficiency, a non-entertainment example: Facebook has also recently integrated UK-based charity site JustGiving. “Each Facebook share from JustGiving raises £5,” said Hernandez. Furthermore, the siteexpects half of all donations to come through Facebook by 2015, he affirmed.