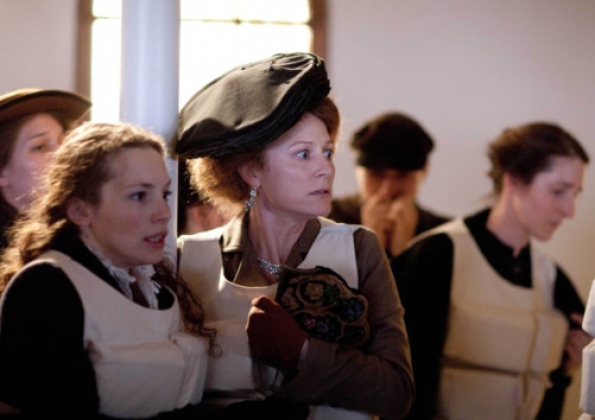 Writer Julian Fellowes, cast and producers discussed the epic series after its MIPTV screening.
By Angela Natividad on April 1, 2012 0 Comments

Photo: Geraldine Somerville as Louisa, Countess of Manton, in the first episode.

Asked what it was like filming in Budapest, Imrie recalled her “favourite moment”: it was “the day I first walked out onto the deck,” she recalled. “This magnificent deck… I really did feel like I was stepping onto the Titanic. It was absolutely thrilling.”

In response to why the Titanic’s story is so important for international audiences, Blackhall thoughtfully said, “I’m always asking myself that question. I think it’s because you can see how people deal with tragedy, when they have their back toward the wall, and how they react. There is something pure, in a good way or in a bad way, there is something pure with people dealing with tragedy.”

“It’s a made for television high-end drama, which we’ve never had before,” Fellowes hastened to point out. “I think this is a good thing.”

Cantalapiedra later asked Fellowes whether he considered the fact that he was writing for a global audience when developing the narrative.

“I never really know what that sort of question means,” Fellowes replied. “We were all aware that the Titanic was a sort of international disaster.” He acknowledged that the Canadians became unofficial “keepers of the flame” but pointed out that the story is itself international in the sense that people from many walks of life were involved.

“Every once in awhile you get these programmes that are sort of Europudding, and everyone is from Austria or whatever… but we didn’t have to do that because there was a genuinely international group of people,” Fellowes added.

“You just have to ride or make something you want to see! And if you stick to that, then on the whole other people will want to see it too,” he affirmed.

One interesting component of the miniseries is its incorporation of numerous real characters. An audience member asked how Fellowes managed to blend fictional storyline into real lives.

“In this film we have lots of factual people and we have chosen to give them real stories,”  said Fellowes; “we don’t just have them on the edge,” as in the case of James Cameron’s Titanic, where numerous living people made cameos in an otherwise fictional storyline.

“I don’t think the Wideners” – a real family that was on board – “had been in any earlier versions [of Titanic]and Mr and Mrs Widener and their son Harry were on the ship,” Fellowes pointed out.

“I think you have a moral responsibility to give real people things to say and things to do that they really would have done in life, that are not in conflict with the person they were.”

There are also moments when exact dialogue from the tragedy is used, for example dialogue that appeared in hearings following the sinking and were repeatedly reported.

Asked how deeply he researched the project, Fellowes admitted it was easy for him. “I was interested in the Titanic really all my life.”

When he was nine, his school screened A Night to Remember, which also covers the event. “I was haunted by this, even as a child, and at that time there were many, many survivors who were still alive… barely past middle age. And I remember all that. So I didn’t have to get myself interested, I was always interested.

“What I was not aware of when I started this film was how much evidence there is … many of the survivors published their accounts straightaway,” Fellowes added, pointing out that these include the accounts of people in first-class, stewardesses and in the second-tier. They are rich in data.

He does, however, lament the loss of Titanic survivor and actress Dorothy Gibson, who released a silent film shortly after her experience called Saved from the Titanic. The film was highly successful,  but the only remaining known prints of it were destroyed in a 1914 studio fire.

“She would have attempted to reproduce exactly what she saw!” Fellowes lamented.
If you missed the screening, here’s the next best thing: a behind-the-scenes trailer, introduced exclusively for MIPTV by Fellowes himself. Enjoy!