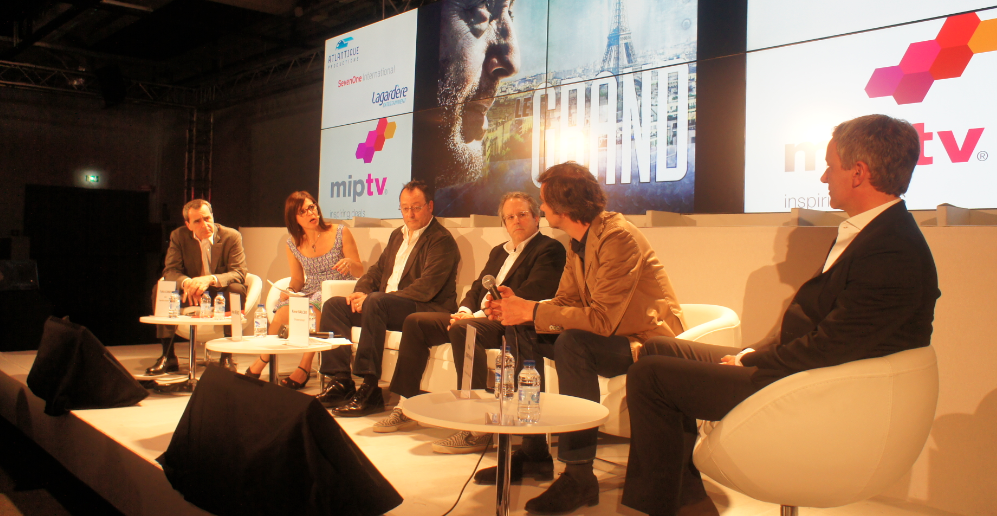 The French actor was the star of a MIPTV press conference today, for Le Grand, his first TV show since his youth.
By James Martin on April 1, 2012 1 Comment

Le Grand is an international coproduction which unites Reno’s acting talent with the writing prowess of René Balcer, who has most famously penned “Law and Order.” They were joined at the press conference by the entire team involved in the show.

Said Balcer, Reno plays an ageing cop, who hence comes “with a lot of baggage, such as worries about what will you leave behind.” He also said the show would focus on “solving more mysterious cases, à la Da Vinci Code, or my “Criminal Intent” series.”

“You will discover episode by episode who he is,” said Reno. “That’s part of the game.” There are no flashbacks as such… but there are references to his past, we’re told.

Le Grand is “”Tough, not young and not in love“” as Jean put it”, said Balcer.

The series’ second star will be Paris: each crime will initially revolve around a landmark of the French capital, and then move on, explained Balcer.

This location is obviously one of the show’s main draws. As producer Lagardère Entertainment’s Takis Candilis observed, “international cop shows are never done in Paris. So we needed a big star and a great showrunner” to carry the project, he said. “There is no bigger French star than Jean Reno; and I’d previously produced the French version of Law and Order with René,” added Candilis.

Le Grand will be shot entirely on location and in English, said Klaus Zimmerman, of Atlantique Productions; then dubbed and subtitled for other countries, depending on national preferences.

Despite the fact that production has only begun today, “the initial response here at MIPTV is overwhelming,” said Jens Richter of SevenOne International, the show’s distributor.

The cinema star then went on to say that Le Grand is not his first ever TV work, as “I did some before when I was young. The goal is being with people from all over the world. For example, René is the most intelligent writer I know. I like to work with open minded people, making a series that’ll be all over the world. That’s a big challenge I’m looking forward to.”

Asked how he planned to take on the role of Le Grand, Reno said: “I’ll read the script, and then go with whatever is in, and between, the lines. I know that the character will inhabit me, so I don’t have a preconceived idea of him. It’s a process that takes time. I just read, and it all sinks in, slowly.”

Finally, when asked if the series would be available in the US on newer platforms like Netflix, with whom SevenOne recently distributed Lilyhammer, Richter said that whilst the initial focus was on cable networks, “we’re wide open. VOD will be great, and even DVD!”