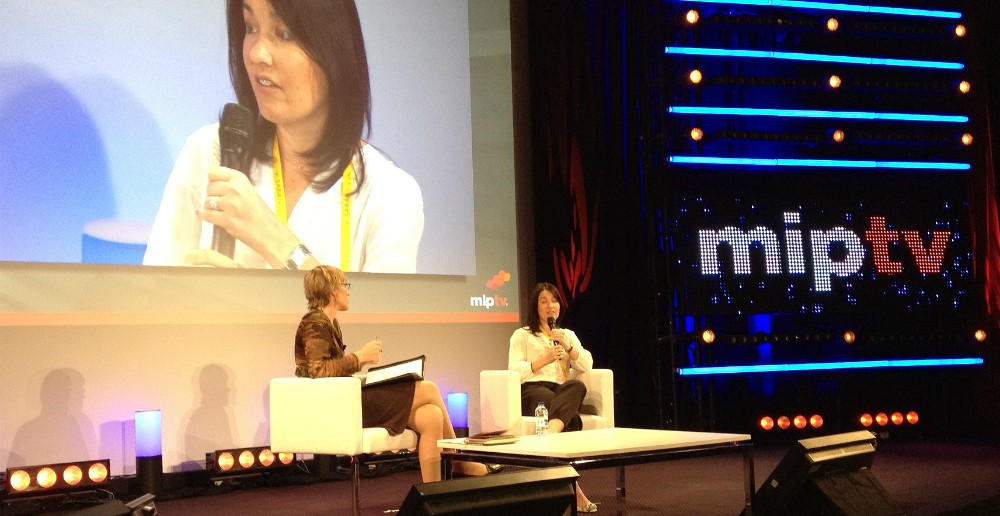 The new players in the market explain why they're friends, not foes in the new era of social, cross-platform media
By Stuart Dredge on April 1, 2012 0 Comments

One of the big draws this afternoon at MIPTV was the New TV Players Interview Series, moderated by journalist Kate Bulkley and featuring some of the biggest technology companies about their TV strategies: Google, Facebook, YouTube and Myspace.

It started with Christian Witt, strategic partner development manager for Google TV in Germany, talking about Google’s efforts to launch an operating system for televisions, including its Chrome web browser and Google Play apps and content store.

He said that content owners who have made an Android app already “have done about 70-80% of the work” to get it onto Google TV: it’s just a case of adapting its user interface for the TV remote control.

Witt explained that content owners may increasingly get their content to Google TV via its browser. “As you have optimised websites for your smartphone – once you enter a website from your small device, it’s tailored specifically for your smartphone – the same can happen for the television.”

One criticism of Google TV is that it’s just trying to move the internet onto the TV. Is it the full internet, or is it going to be more about apps created specifically for the TV? “I don’t think it’s a criticism, I think it’s a strong value of Google TV,” said Witt. “We’re trying to embrace the whole internet.”

Content owners have choices, though: YouTube is already one of the key apps for Google TV, so if they’re distributing video through that service, it’ll be available on the sets too. So three paths to the screen: an app, a Google TV-optimised website, and YouTube.

Google is working with a number of consumer electronics firms, including Vizio, LG and Sony. Witt said Google is “in talks” with Samsung, but isn’t on that company’s connected TV sets yet – unsurprisingly so, given the fact that Samsung has its own Smart TV OS and ecosystem.

Witt was asked if Google has any plans to commission content or apps. “Not at all,” he replied. “We’re providing an open-access platform, and we think we’re going to do this in an easy way.”

Bulkley asked if the smart stuff should be happening on tablets, with the big screen just being the live TV programme? Witt replied that having a common software platform across these devices – i.e. Android – is the best starting point. “Depending on the developer or the content provider, whatever he perceives as the best way to interact with the user.”

Witt have two pieces of advice for people designing apps for Google TV. First, they need to change to a D-pad form of navigation, to suit the remote control. But they also need to think about the font sizes, and perhaps having more animated or video content within its menus, to look more dynamic on the TV screen.

What might the install base of Google TV be in a year or 18 months’ time? “We think that an open operating system, an open platform has clear advantages. We think we’re going to see the same trajectory [as Android smartphones]for TV devices.” But he admitted that people upgrade their televisions less often than their smartphones, so it may take a while.

Next up: Karla Geci, strategic platform partnerships exec for Facebook, which has been doing a lot of work with television in recent times. She started with a video of the social network’s new Timeline for Pages – the new design for the Facebook presences of brands, celebrities and media companies.

“I think this is introducing a completely new way of storytelling via your presence on Facebook,” said Geci, reminding the audience that US soap opera Dallas is returning, and has used the Timeline feature to build buzz around its comeback.

“They’ve built an amazing timeline for the show, and brought back photography and videos from the show. You can go back to 1980 and see what JR was up to then. And 650,000 Likes on that page. A whole new generation is being reintroduced to Dallas, and it’s through their Timeline on Facebook.”

Geci noted that there is a lot of debate around whether brands and entertainment companies should build applications on Facebook, or build Facebook into their own websites and apps. Geci said that it’s not the key question to ask.

“Is social a part of that experience? Are you watching with friends or discovering content with friends?” she said, referring to streaming music service Spotify as a good example of building Facebook into an external application, while getting “distribution, traffic, eyeballs and discovery” from the social network.

How about Facebook on TVs – connected TVs like Google TV? Geci said that it’s challenging to have such a personalised experience on a shared device. “How should social be experienced in the living room? But what I am excited about is second-screen experiences like Zeebox saying ‘I’ll help you sort that out’.”

“Pretty much every major studio has launched some kind of app experience on Facebook,” she said. “For the most part it’s been video-on-demand streaming, with purchasing through Facebook credits.”

She said some broadcasters are starting to look at allowing viewers to vote for talent-show contestants using the currency too, and suggested that the social games industry offers an inspirational model in this regard.

“If the games space could completely reinvent themselves that way on Facebook, why can’t film and television?” said Geci, who noted that 50% of all votes for UK broadcaster Channel 5’s Big Brother series came from Facebook.

Will Facebook ever commission content? “No, we have a whole conference of people here who do that a whole lot better than us!” she laughed. “The best thing we could do for the industry is to continue to make sharing incredibly powerful and incredibly useful.”

Geci was asked if Facebook will improve its analytics for videos shown on Facebook, but she said the social network is more focused on letting broadcasters and producers use third-party video players on their pages, and whatever analytics tools they like.

“We definitely encourage you to use your own media player so you can get all that good data and analytics,” said Geci.

The third speaker in the session was Blair Day, VP strategy at Myspace. Myspace? Yes, the fallen giant of the social networking world is trying to reinvent itself as a social entertainment network, under new owner Specific Media, and “chief creative officer” Justin Timberlake. Yes, that one.

“Everybody knows that music is powerful. Video is even more so,” he said. “We’re in this space in the industry where video and content is starting to be consumed in new and interesting ways. So it’s natural for us to move into that space.”

Myspace is actually making an app – Myspace TV – for Panasonic’s connected TV sets, which will be released in July for those before going to other platforms. “By the end of the year we’ll be on close to 20 million devices in the US,” he said.

The app will be available across TVs, tablets, mobile phones and computers, providing social chat around what people are watching on TV, and will have what Day described as “companion advertisements”.

“We’ll launch with ad-supported music channels and additional complementary content around that space,” he said. “From there we’ll grow in breadth and depth… We’re not trying to break any of the traditional models out there today. We’re just here to enhance them.”

Some of this will be curated shows, but some will be original content commissioned by Myspace itself, which has already been seen with its Wolfpack of Reseda series on its website. “Branded entertainment is a trend we’ll see more of,” added Day.

Day was asked about Netflix as a competitor. “Where we’re moving into this social television space, linear television is still an incredibly important play,” he said. “We want to take that passive linear experience and enhance it with push recommendations and such.”

For advertising, Day expects a CPM of around $15, comparable with traditional broadcast television, he says, although it may go higher thanks to a layer of targeting on top of that. The ad revenues will be shared with content providers, but there’s no standard split like Apple’s 70/30. “I’m a whole lot more flexible!” he said. “Either that, or you drive a harder bargain,” noted Bulkley.

The US launch for Myspace TV is July, but Day said it won’t cross the Atlantic until next year. “We’re looking right now for 2013 to move into our second launch markets,” he said.

The final speaker was Jed Simmons, director, head of original programming at YouTube EMEA, to talk about how there is more premium, longer-form content appearing on YouTube. It’s not just about cats on skateboards any more. He started by talking about his experience at Next New Networks, which was acquired by YouTube last year.

“YouTube was a platform for videos, yet we were brand-builders and channel-builders, and we really wanted so much more,” said Simmons. “YouTube’s overall vision is we wanna be the best platform for the next generation of channels.”

But he noted that this will include the old channels, like the BBC and others. “The next generation of channels for audiences today includes the extension or repackaging or new versions of the big brands in television.”

He gave a stat: “Each day, 500 years of YouTube programming is watched on Facebook. That comes out to 4.8 million hours.” And he claimed this shows that in the new TV world, a channel doesn’t have to be a linear channel in the traditional sense. It can be an on-demand, socially shared YouTube channel.

Channel owners can do live programming, longform and shortform video. But also other things. “All programmers are curators,” he said. “We’ve emphasized a whole series of curation tools. It’s not just about original programming. It’s also about library programming.”

Simmons said YouTube is keen to use that metric and deeper analytics to attract more advertising spend away from traditional TV.

He also explained that for channel owners on YouTube, it’s vital to think about more than just uploading videos, saying that producers can’t think their job is over as soon as they deliver their show.

“That special special piece, which really becomes critical: It’s audience building. There is so much excitement in the way that you do audience building, from talking to the blogs, responding to the comments…” And he recommended that creators read the YouTube Creators PlayBook, which outlines some of the best ways to do that.

Finally, Simmons said YouTube is “exploring” the idea of funding channel partners in the UK and Europe, following its initial slate in the US.